The Monterozzi necropolis is an Etruscan necropolis on a hill east of Tarquinia in Lazio, Italy. The necropolis has about 6,000 graves, the oldest of which dates to the 7th century BCE. About 200 of the gravestones are decorated with frescos.[1] Monterozzi was designated as a UNESCO World Heritage Site in 2004. 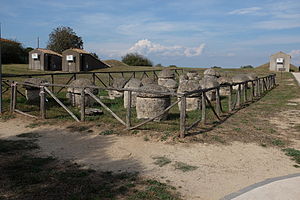 Simple tombs for cremation burials from the Villanovan culture predated the painted tombs.