Montour County is a county located in the U.S. state of Pennsylvania. As of the 2010 census, the population was 18,267.[1] Its county seat is Danville.[2] The county is named for Andrew Montour,[3] a prominent Métis interpreter who served with George Washington during the French and Indian War. It encompasses 132 sq mi, making it the smallest county by land area in the state.[4]

John Davis was one of the first settlers in Montour County.[5] 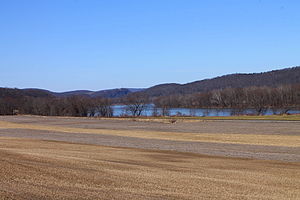 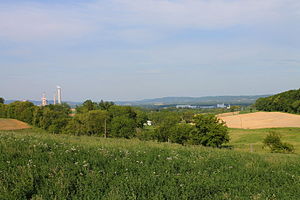 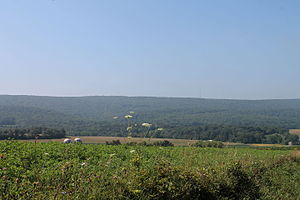 There are three major anticlines and synclines in Montour County. These are the White Deer Anticline, the Lackawanna Syncline, and the Milton Anticline. These are located in the northern, central, and Montour Ridge areas of the county, respectively. These features are situated i a northeast-southwest alignment. They were formed by regional compression and uplift approximately 200 million years ago, during the Permian Period. During the Pleistocene Period, the Illinoian glacial advance reached Montour County, although the Wisconsin glacial advance stopped slightly short of it. There are alluvial deposits in many of the river valleys in the county, especially there two streams or rivers meet. These deposits were formed fairly recently, geologically speaking.[7]

The water supply for Montour County comes primarily from the Susquehanna River, as well as wells and springs. The rural areas especially depend on wells for their water supply, but Danville mostly uses the Susquehanna River. Wells drilled into Silurian rock have a tendency to be highly hard and prone to developing sinkholes. However, the Keyser, Wills Creek, and Tonoloway Formations are considerably better at producing water.[7]

There are approximately 350 farms in Montour County. The majority of these farms produce beef, hogs, and dairy. Limestone is mined in some areas in the county.[7]

In October 2015, Montour County Commissioners sought court approval for a $1 million emergency loan to cover expenses. The loan was necessitated by the lack of a state general fund budget, which delayed many state and federal program funding streams to the county.[19] The hearing will be before Judge Thomas James, Jr. By state law, the county commissioners must have court approval to take out debt outside of the usual budget and debt processes. 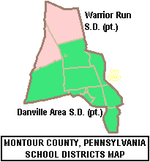 Central Susquehanna Intermediate Unit #16 provides a wide variety of services to children living in Montour County. These include early intervention, special education support services, driver education on road training, speech and hearing therapy and autistic support. Services for children during the preschool years are provided without cost to their families when the child is determined to meet eligibility requirements.[21]

As reported by the Pennsylvania Department of Education - EdNA. February 2014[23] 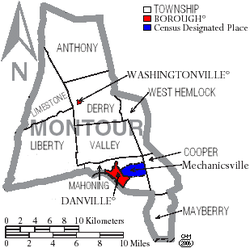 Under Pennsylvania law, there are four types of incorporated municipalities: cities, boroughs, townships, and, in one case, towns. The following boroughs and townships are located in Montour County: