From Infogalactic: the planetary knowledge core
Jump to: navigation, search
Not to be confused with Montreal Biodome.

The Biosphere is a museum in Montreal dedicated to the environment. It is located at Parc Jean-Drapeau, on Saint Helen's Island in the former pavilion of the United States for the 1967 World Fair, Expo 67. 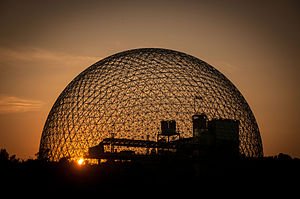 Biosphere at the sunset.

The architect of the geodesic dome was Buckminster Fuller. The building originally formed an enclosed structure of steel and acrylic cells, 76 metres (250 ft) in diameter and 62 metres (200 ft) high. The dome is a Class 1, Frequency 16 Icosahedron. A complex system of shades was used to control its internal temperature.

Architects from Golden Metak Productions designed the interior exhibition space. Visitors had access to four themed platforms divided into seven levels. The building included a 37-metre-long escalator, the longest ever built at the time. The Minirail monorail ran through the pavilion.[1]

In the afternoon of 20 May 1976, during structural renovations, a fire burned away the building's transparent acrylic bubble, but the hard steel truss structure remained.[2] The site remained closed until 1990.[3][4]

In August, 1990, Environment Canada purchased the site for $17.5 million to turn it into an interactive museum showcasing and exploring the water ecosystems of the Great Lakes-Saint Lawrence River regions.[4] The museum was inaugurated in 1995 as a water museum, and is a set of enclosed buildings designed by Éric Gauthier, inside the original steel skeleton. The Biosphère changed its name in 2007 to become an environment museum. It offers interactive activities and presents exhibitions about the major environmental issues related to water, climate change, air, ecotechnologies and sustainable development.

The Biosphere appears in the 2003 animated Jacob-Two Two TV episode "Jacob Two Two and the Notorious Knit Knapper", in which it is used as the headquarters for a group of seniors who plan on knitting a giant tea cosy to cover Montreal.