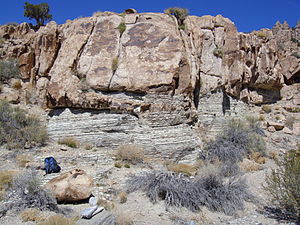 Monzonite is an igneous intrusive rock. It is composed of approximately equal amounts of plagioclase and alkali feldspar, with less than 5% quartz by weight.[1] It may contain minor amounts of hornblende, biotite and other minerals. If quartz constitutes greater than 5%, the rock is termed a quartz monzonite.[2]

If the rock has a greater percentage of alkali feldspar, it grades into a syenite. With an increase in calcic plagioclase and mafic minerals the rock type becomes a diorite. The volcanic equivalent is the latite.[2]

Monzonite was originally named after the Monzoni range in Val di Fassa (Trento Province - Italy) where it is abundant. As rock definitions have been systematized and codified, this association has lost any relevance to the rock's definition.[1]