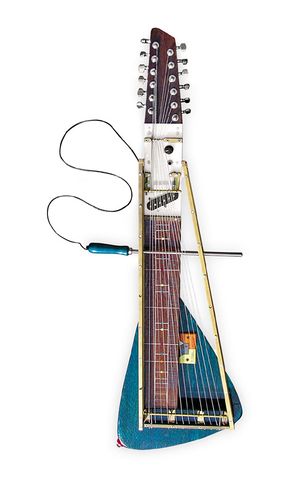 The Moodswinger is a twelve-string electric zither with an additional third bridge designed by Yuri Landman. The rod which functions as the third bridge divides the strings into two sections to cause an overtone multiphonic sound. One of the copies of the instrument is part of the collection of the Musical Instrument Museum in Phoenix, Arizona.

In March 2006 Landman was contacted by the noise band Liars to make an instrument for them. After 6 months he finished two copies of The Moodswinger, an electric 12-string 3rd-bridge overtone koto, one for guitarist/drummer Aaron Hemphill and one for himself.[1] Although it closely resembles an electric guitar, it is actually a zither, as it has neither frets nor a proper neck. The pickup and electronics are built into the neck instead of in the body like usual electric guitars. In 2008 the Moodswinger II was released as a serial product. Jessie Stein of The Luyas owns a copy. 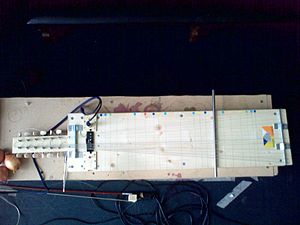 In 2009 Landman created a derivative version of the instrument called the Home Swinger, for workshops at festivals, where participants built their own copy within four hours. In 2010 the Musical Instrument Museum in Phoenix included a Moodswinger as well as a Home Swinger in their collection as two of the pieces of the Dutch section of musical instrument inventions. 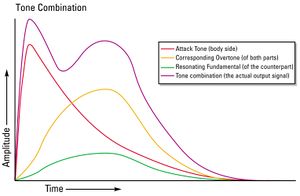 The 3rd bridge divides the strings into two segments with different pitches. Depending on where the string is played, a bell-like harmonic second tone is created. The string resonates more or less when the back side is struck, depending on the position of the 3rd bridge along the string. This can be explained by acoustic resonance and microtonality. At harmonic nodal positions, the string resonates more than at other positions. For instance, dividing the string 1/3 + 2/3 creates a clear overtone, while 24/33 + 9/33 creates an indistinct overtone. The color dotted scale indicates the simple-number ratios up to the 7 limit (on the Moodswinger II to the 8 limit.) On these positions just intoned harmonic dyads occur.

The tuning of this instrument is a circle of fourths: E-A-D-G-C-F-A#-D#-G#-C#-F#-B, arranged in 3 clusters of 4 strings each to make the field of strings better readable. 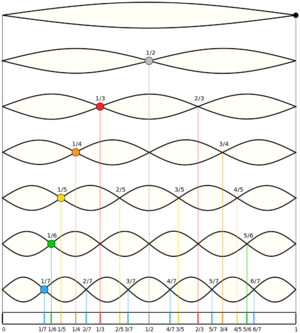 Moodswinger scale, based on overtone positions

The instrument has 3 printed scales, used as guides for positioning the moveable third bridge and reading the played notes: 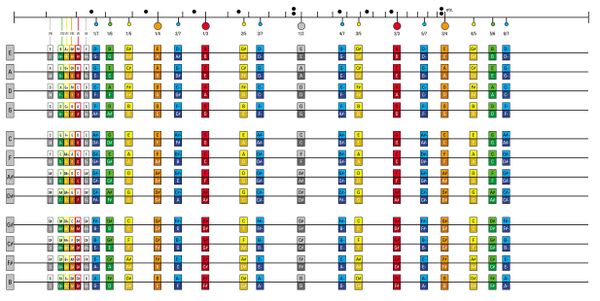