From Infogalactic: the planetary knowledge core
Jump to: navigation, search
Not to be confused with Moon rock.

Moonstone is a sodium potassium aluminium silicate, with the chemical formula (Na,K)AlSi3O8.

Its name is derived from a visual effect, or sheen, caused by light diffraction within a microstructure consisting of a regular succession of feldspar layers.

Moonstone has been used in jewelry for centuries, including ancient civilizations. The Romans admired moonstone, as they believed it was born from solidified rays of the moon.[1] Both the Romans and Greeks associated Moonstone with their lunar deities. In more recent history, the moonstone became popular during the Art Nouveau period; French goldsmith René Lalique and many others created a large quantity of jewelry using this stone.[2]

The most common moonstone is of the mineral adularia, named for an early mining site near Mt. Adular in Switzerland, now the town of St. Gotthard.[3] The plagioclase feldspar oligoclase also produces moonstone specimens. Moonstone is feldspar with a pearly and opalescent schiller.[3][4] An alternative name is hecatolite.[4]

Moonstone is composed of two feldspar species, orthoclase and albite. The two species are intermingled. Then, as the newly formed mineral cools, the intergrowth of orthoclase and albite separates into stacked, alternating layers. When light falls between these thin, flat layers, it scatters in many directions producing the phenomenon called adularescence. 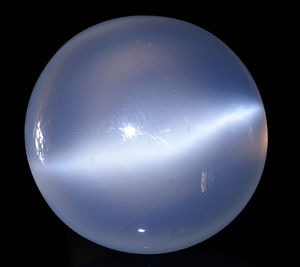