Moore County is a county located in the U.S. state of North Carolina. As of the 2010 census, the population was 88,247.[1] Its county seat is Carthage[2] and its largest town is Pinehurst.

Moore County comprises the Aberdeen- Pinehurst-Southern Pines, North Carolina Micropolitan Statistical Area and is sometimes included in the Research Triangle and Greater Raleigh-Durham CSA. It lies at the northern edge of the area known as the Sandhills region.

The county was formed in 1785 from Cumberland County. It was named after Alfred Moore, an officer in the American Revolutionary War and associate justice of the Supreme Court of the United States.

In 1907 parts of Moore County and Chatham County were combined to form Lee County.

Celebrities who frequent or have private homes in the area are Michael Jordan, Tiger Woods, Jack Nicklaus, and Sean Connery. Past residents of the area include Annie Oakley, Harvey Firestone, and John D. Rockefeller.

Moore County is a member of the regional Triangle J Council of Governments.

The North Carolina Department of Juvenile Justice and Delinquency Prevention previously operated the Samarkand Youth Development Center (YDC), a correctional facility for delinquent girls, in Eagle Springs. The 60 acres (24 ha) complex first opened in 1918 and did not have a fence.[11]

Moore County Board of Commissioners 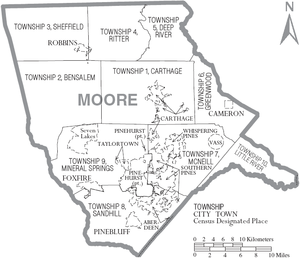 The county is divided into ten townships, which are both numbered and named:

Attractions and places of interest