Mordechai Anielewicz (1919 – 8 May 1943) was the leader of Żydowska Organizacja Bojowa (English: Jewish Combat Organization), also known as ŻOB, during the Warsaw Ghetto Uprising from January to May 1943. His predecessor in command was Pinkus Kartin. 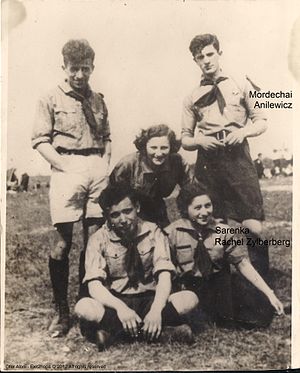 Anielewicz was born into a poor Jewish family in the small town of Wyszków, near Warsaw. After completing secondary school, he joined and became a leader of the "Hashomer Hatzair", the Zionist-socialist youth movement.

On 7 September 1939, a week after the German invasion of Poland, Anielewicz escaped with a group from Warsaw to the east of the country in the hopes that the Polish Army would slow down the German advance. When the Soviet Red Army invaded and then occupied Eastern Poland in accordance with the Molotov–Ribbentrop Pact, Anielewicz heard that Jewish refugees, other youth movement members and political groups had flocked to Wilno, which was then under Soviet control. He travelled to Wilno and attempted to convince his colleagues to send people back to Poland to continue the fight against the Germans. He then attempted to cross the Romanian border in order to open a route for young Jews to get to the Mandate of Palestine, but was caught and thrown into a Soviet jail. He was released a short time later, and returned to Warsaw in January 1940 with his girlfriend, Mira Fuchrer. 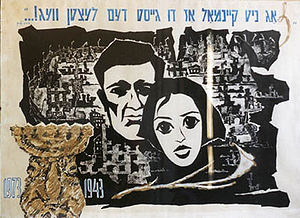 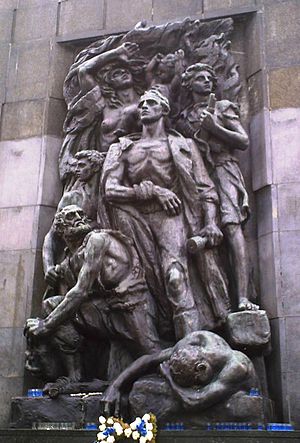 Warsaw Ghetto Heroes' Monument in Warsaw (Anielewicz is in the center, wielding a hand grenade) 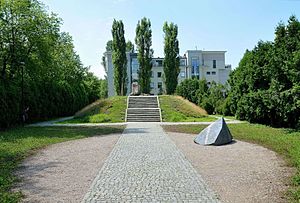 General view of Miła 18 memorial in Warsaw, place of death of Mordechai Anielewicz

In the summer of 1942, Anielewicz visited the southwest region of Poland – annexed to Germany – attempting to organize armed resistance. Upon his return to Warsaw, he found that a major deportation to the Treblinka extermination camp had been carried out and only 60,000 of the Warsaw Ghetto's 350,000 Jews remained. He soon joined the ŻOB, and in November 1942, he was appointed as the group's chief commander. A connection with the Polish government in exile in London was made and the group began receiving weapons from the Polish underground on the "Aryan" side of the city. On 18 January 1943, Anielewicz was instrumental in the first act of the Warsaw Ghetto Uprising, preventing the majority of a second wave of Jews from being deported to extermination camps. This initial incident of armed resistance was a prelude to the Warsaw Ghetto Uprising that commenced on 19 April.

Though there were no surviving eyewitnesses, it is assumed that he died on 8 May 1943, along with his girlfriend and many of his staff, at the surrounded ŻOB command post at 18 Miła Street.[1] His body was never found and it is generally believed that it was carried off to nearby crematoria along with those of all the other Jewish dead; nevertheless, the inscription on the obelisk at the site of the Miła 18 bunker states that he is buried there. 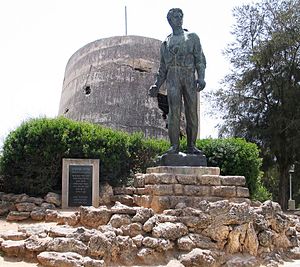 During the later part of the war, a unit of the People's Guard formed from Warsaw Ghetto survivors bore the name of Anielewicz. In December 1943, kibbutz Yad Mordechai in Israel was renamed after him and had a monument erected in his memory. There are also memorials for him in Wyszków and in Warsaw, where in the 1960s Gęsia Street, site of a former German concentration camp, was renamed Mordechaj Anielewicz Street. In 1983, 40 years after their deaths, the Israeli government issued a two-stamp set honoring Anielewicz and Josef Glazman as heroes of the Warsaw and Wilno ghettos.[2]

The actor Murray Salem played Anielewicz in the 1978 television miniseries Holocaust, while Hank Azaria played the role in the 2001 television film Uprising. Anielewicz is also a key figure in Harry Turtledove's alternate history series Worldwar and appears as a character in the Highlander 1997 novel Zealot. In the role-playing game Wraith: The Oblivion, he is the de facto leader of the Shadowlands version of the Warsaw Ghetto. In Leon Uris's 1962 novel Mila 18, the protagonist Andrei Androfsky is modeled on Anielewicz. In John Ross's 1996 novel Unintended Consequences, one of the protagonists, Irwin Mann, is depicted as the first member of the uprising to capture a Nazi guard's rifle, and Anielewicz is briefly depicted in interactions with Mann, and mentioned infrequently throughout the rest of the book.