From Infogalactic: the planetary knowledge core
Jump to: navigation, search
This article is about the district of London. For the park, see Morden Park (park).

Morden Park is an area within the district of Morden in the London Borough of Merton, and includes the Park itself, an area of green space in an otherwise dense cluster of 1930s suburban housing.

The present park and sports fields between Hillcross Avenue, London Road/Epsom Road and Lower Morden Lane are owned and managed by the London Borough of Merton parks department and cover land that previously formed the grounds of Morden Park House, a small 18th-century country estate (not to be confused with Morden Hall Park, the National Trust property close to Morden town centre).

The estate comprised enclosed parkland, a small Georgian country house built at the top of the hill in the 1770s for merchant and distiller John Ewart with attached landscaped gardens and a farm called Morden Park Farm. By the mid-1780s the estate was in the possession of the Polhill family.[1] One member of the family, Edward Polhill, bequeathed £1,000 in 1826 to the parish church for the benefit of the Sunday school.[2]

At the bottom of the hill in the direction of Lower Morden runs a small brook.

In the park, surrounded by trees, is a large circular mound. This has been identified as a possible burial mound from the Iron Age, Roman or Saxon periods. Archaeological investigations were carried out in the 1950s although no conclusive proof as to its date or purpose were found.English Heritage believes that the earthwork was remodelled at some time into a belvedere, or viewing platform, with a spiral path to ascend it. Between 1960 and the mid-1990s a cycle speedway track sat alongside the mound, which was home to Morden Cycle Speedway Club. The track has since been demolished but it's still possible to find signs of the track's existence. A local Aero Modelling Club used the area South of the Mound on Sunday Mornings for flying practice.

Morden Park House remains and, after many years of neglect and semi-dereliction, has recently been restored and is now the local register office and a venue for wedding ceremonies.

The entrance to the Park, from London Road is now dominated by South Thames College, Merton Campus. This was built on the site of a Pig Farm which was destroyed by fire at some point in the late 40's or early 50's. The derelict sties remained in place for some years until the early 60's when clearing began for the College. During this period many bones could be found amongst the rubble; these have been assumed by archaeologists to be those of pigs. Children from the Council Estate opposite the entrance at Hatfield Mead used this area as an adventure playground for many years. At this period a Gatehouse (occupied until its demolition in the 60's) was prominent at the entry.

Facilities in Morden Park include a pitch and putt golf course and Morden Park Swimming Pool which was opened in the late 1967 on the site of the old house's gardens.

South Thames College is adjacent to the park and occupies the former site of the farm.

Morden Park also hosts the annual Morden Park Holiday Club event for children to attend for a week during their summer holidays from school. This event is organised by the churches in the surrounding area. 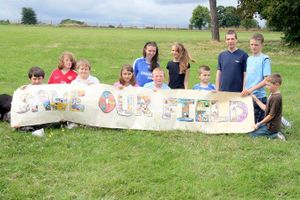 Kids want to Save Morden Park 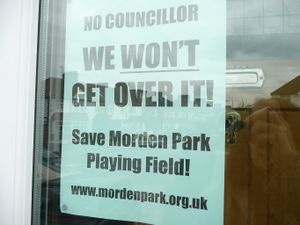 A poster to Save Morden Park" 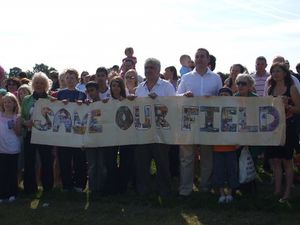 In 2008, Merton Council proposed allowing Goals Soccer Centres, to build 10 five-a-side football pitches, 4 seven-a-side football pitches, 1 full-size football pitch, 2 multi-sport areas, and 2 full-size football pitches (with all bar the latter using astroturf, floodlighting and be available for a fee), a car park (with a capacity for up to 99 cars) and a clubhouse with a licensed bar on part of the park. When full there would be more than 300 people playing at any one time and at hand-over times between games there may be as many as 600 people on the playing fields, and more in the licensed bar.[4] This proposal has been met with fierce opposition from residents; on Sunday, 26 November 2008, 250 people campaigned for a "protest picnic" to show their support for a campaign to save the park from being sold off for commercial development to Goals. Local residents joined with members of Morden parish churches and Baitul Futuh mosque to discuss how they could work together to save the field. There were large football and cricket games organised and some colourful arts and crafts activities. As a result, Merton Council agreed to revoke the decision[5][6]