The Morgan Library & Museum – formerly the Pierpont Morgan Library – is a museum and research library located at 225 Madison Avenue at East 36th Street in the Murray Hill neighborhood of Manhattan, New York City. It was founded to house the private library of J. P. Morgan in 1906, which included manuscripts and printed books, some of them in rare bindings, as well as his collection of prints and drawings. The library was designed by Charles McKim of the firm of McKim, Mead and White and cost $1.2 million. It was made a public institution in 1924 by J. P. Morgan's son John Pierpont Morgan, Jr., in accordance with his father's will.

The building was designated a New York City landmark in 1966[4] and was declared a National Historic Landmark later that same year.[3][5][6] 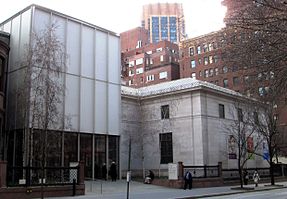 Today the library is a complex of buildings which serve as a museum and scholarly research center. The scope of the collection was shaped in its early years as a private collection by Belle da Costa Greene, J.P. Morgan's personal librarian, who became the library's first director and served from the time that it became public until her retirement in 1948. Her successor Frederick Baldwin Adams, Jr. managed the Library until 1969 and was also world-renowned for his own personal collections. The most internationally significant part of the collection is its relatively small but very select collection of illuminated manuscripts, and medieval artworks such as the Stavelot Triptych and the metalwork covers of the Lindau Gospels. Among the most important manuscripts are the Morgan Bible, Morgan Beatus, Hours of Catherine of Cleves, Farnese Hours, Morgan Black Hours, and Codex Glazier. The manuscript collection also includes authors' original manuscripts, including some by Sir Walter Scott and Honoré de Balzac, as well as the scraps of paper on which Bob Dylan jotted down "Blowin' in the Wind" and "It Ain't Me Babe".

It also contains a large collection of incunabula, prints, and drawings of European artists—Leonardo, Michelangelo, Raphael, Rembrandt, Rubens, Gainsborough, Dürer, and Picasso; early printed Bibles, among them three Gutenberg Bibles; and many examples of fine bookbinding. Other holdings include material from ancient Egypt and medieval liturgical objects (including Coptic literature examples),[7] Émile Zola, William Blake's original drawings for his edition of the Book of Job; concept drawings for The Little Prince by Antoine de Saint-Exupéry; a Percy Bysshe Shelley notebook; originals of poems by Robert Burns; a Charles Dickens manuscript of A Christmas Carol; a journal by Henry David Thoreau; an extraordinary collection of autographed and annotated libretti and scores from Beethoven, Brahms, Chopin, Mahler and Verdi, and Mozart's Haffner Symphony in D Major; and manuscripts of George Sand, William Makepeace Thackeray, Lord Byron, Charlotte Brontë and nine of Sir Walter Scott's novels, including Ivanhoe. The collection still includes a few Old Master paintings collected by Morgan between 1907 and 1911 (works by Hans Memling, Perugino, and Cima da Conegliano), but this has never been the collection's focus, and Ghirlandaio's masterpiece Portrait of Giovanna Tornabuoni was sold to Thyssen when the Great Depression worsened the Morgan family's finances.[8] 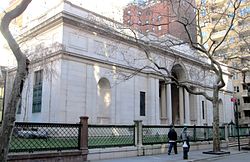 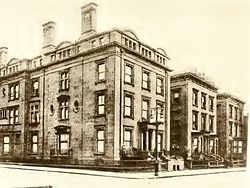 229 Madison Avenue was built in 1854 by Isaac Newton Phelps and bequeathed to his daughter Helen Stokes, wife of Anson Phelps Stokes.

Of interest to Australians is a copy of the letter written by Andrea Corsali from India in 1516. This letter, one of five in existence, contains the first description of the Southern Cross which is also illustrated by Corsali in this letter and which was also named "croce" by him. One other copy of the letter is in the British Museum and two are in Australia. The fifth is in the Library of Princeton University. The letter is also readily available in Ramusio's Viaggi, a compendium of letters of exploration, published in Venice in three volumes from 1555 on.

The first building constructed to house Morgan's library – the "McKim Building" – was designed in the Classical Revival style by Charles Follen McKim of the noted firm of McKim, Mead & White in 1903. It is located at 33 East 36th Street, which was at the time just to the east of Morgan's residence, a brownstone house at 219 Madison Avenue built in 1880. McKim took his inspiration from the Villa Giulia and its Nymphaeum.[4] The building was constructed from 1902-1907 and has a facade of Tennessee marble and a Palladian arch entrance which features two lionesses sculpted by Edward Clark Potter, who would later create the two lions that guard the New York Public Library's main building.[4][12] Also in the entrance are roundels and panels by Andrew O'Connor and Adolph Weinman.[4]

The interior of the building is richly decorated, with a polychrome rotunda which leads to three public rooms, which were originally Morgan's private study, the librarian's office, and the library itself.[12] The rotunda itself has a domed ceiling with murals and plasterwork inspired by Raphael, created by H. Siddons Mowbray. Morgan's study, now the West Library, has been called "one of the greatest achievements of American interior decoration," while the East Library features triple-tiers of bookcases.[4]

Morgan's residence was torn down in 1928, after his death, to be replaced by an annex building which featured an exhibition hall and a reading room, designed by Benjamin Wistar Morris to harmonize with McKim's original.[4]

The remaining Italianate brownstone house in the library complex is 231 Madison Avenue, on the corner of East 37th Street. This house was built by Isaac Newton Phelps who bequeathed it to his daughter, Helen Stokes, wife of Anson Phelps Stokes. She extended the building, doubling the size and adding an additional attic floor (architect R. H. Robertson). Their son, architect Isaac Newton Phelps Stokes, was born in the house on April 11, 1867. The house was purchased by J. P. Morgan in 1904. It served as the home of his heir J. P. Morgan Jr. from 1905 to 1943.[2][13]

The most recent addition to the library is a modernist entrance building designed by Italian architect Renzo Piano – his New York City debut – and Beyer Blinder Belle, which was completed in 2006.[4] Although externally "bland", the building helps to organize the interior spaces of the complex.[2] 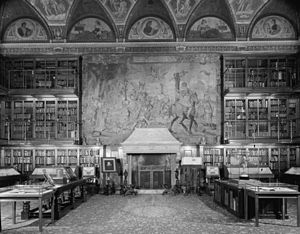 The Library was closed during the construction and expansion. In the interim it sponsored numerous traveling exhibitions around the country. When the work was completed, it reopened on April 29, 2006 as the Morgan Library & Museum. With the expansion above and below street level, the Morgan's exhibition space had been doubled; Piano set its new reading room under a translucent roof structure, to allow scholars to examine manuscripts in natural light. Piano's four-story steel-and-glass atrium links McKim's library building and the Morgan house in a new ensemble. Added storage facilities were obtained by drilling into Manhattan's bedrock schist.

Between 1987 and 2008, Charles E. Pierce Jr. served as director of what was then known as the Pierpont Morgan Library.[14] During his tenure at the Morgan Library and Museum between 2008 and 2015, director William M. Griswold spearheaded the growth of its collections, exhibition programs and curatorial departments, adding a photography curator in 2013, a first for the institution. In an effort to reach a younger audience, he also presented many contemporary-art exhibitions and installed temporary sculpture in its atrium.[15] In 2015, the Morgen named Colin Bailey as its new director.[16]