Morganton is a city in Burke County, North Carolina, United States. The population was 16,918 at the 2010 census.[3] It is the county seat of Burke County.[4]

Morganton is one of the principal cities in the Hickory-Lenoir-Morganton, NC Metropolitan Statistical Area. A site five miles north of here has been identified as the Mississippian culture chiefdom of Joara, occupied from 1400AD to 1600AD. This was also the site of Fort San Juan, built in 1567 by a Spanish expedition as the first European settlement in the interior of North America, 40 years before the English settlement of Jamestown, Virginia.

The oldest-known European inland (non-coastal) settlement in the United States of Fort San Juan has been identified at Joara, a former Mississippian culture chiefdom located about five miles north of present-day Morganton. In 1567 a Spanish expedition built the fort there, while seeking to establish an interior route to Mexican silver mines. (They did not have an accurate grasp of the geography.) This was more than 40 years before the English settled Jamestown, Virginia, their first permanent settlement in North America.[5]

The Spanish left a 31-man garrison that occupied the fort for 18 months before being overcome in a Mississippian attack. Five other Spanish forts in the larger interior region were also destroyed about that time. Only one soldier survived. The fort and Indian settlement have been under professional excavation since the early 21st century, with findings published since 2004.[6][7][8] Europeans associated with the British colonies did not try to settle this far west for nearly 200 years, organizing Burke County in 1777.

Today Joara is identified as a significant archaeological and historic site near the Watersee River in the Upper Catawba Valley. Construction of its mounds is believed to have been started by the people of the Mississippian culture by AD 1000, and they occupied the site continuously from 1400AD to 1600AD.[8] Based on additional archeological excavations at the "Berry Site" that revealed the remains of a defensive moat constructed in European style, researchers in 2013 concluded that this was the site of Fort San Juan and Joara. Earlier evidence found in the area included "military artifacts and burned remains of Spanish-built huts."[8][9]

Public welfare facilities, such as the North Carolina School for the Deaf: Main Building and Western North Carolina Insane Asylum, were first authorized by the state legislature in the late 19th century after the American Civil War.

In the early 20th century, textile mills were developed in the Piedmont as industry left union-dominated areas of the Northeast United States. During the century, however, these industrial jobs gradually moved offshore.

In the late 20th century, Morganton and Burke County, which was still largely rural and with big poultry farms, became locations for industrial-scale poultry processing plants. These jobs attracted many new immigrants to the state from Central America, leading to an increase in Latino population in this area. During the 1990s, Guatemalan-born workers in Morganton worked to organize a union at the Case Farms poultry plant but were ultimately unsuccessful.[10] Labor and factory work have changed in the "Nuevo" South, where many Latino immigrants work in low paid industrial jobs. They are competing with globalization in some industries. At the state level, North Carolina is working to encourage immigrant communities and their contributions.

On January 31, 2006, an explosion occurred at Synthron Inc., a paint additive chemical manufacturer's plant in Morganton.[11] Workers at Synthron reported hearing a loud hiss minutes before the explosion.[12] Most were able to escape the building before the blast, but even some who were outside were thrown as far as 20 feet (6.1 m). The explosion was heard and felt as far away as 50 miles (80 km).

On the day of the explosion, operations appeared normal until after the steam was turned off and the polymer initiating solution was pumped into the reactor. The operator in charge noted that initially the reaction did not proceed as vigorously as expected, but later the solvent evaporated and the condensed solvent flow returning to the reactor appeared within normal range. A few minutes later, the operator heard a loud hissing and saw vapor venting from the reactor manway. The irritating vapor forced him out of the building. Three other employees also left the building because of the vapors. The operator reentered the building wearing a respirator and started emergency cooling water flow to the reactor. The building exploded less than 30 seconds after he exited the second time.[12] The US Chemical Safety Board (CSB) stated that the solvent vapor leaked from the overheated and over-pressurised process reactor, forming a flammable vapour cloud inside the building that ignited.[13]

A total of 14 people were injured in the blast, of whom one man later died.[13] In addition, at least 300 fish died due to chemicals leaking into a creek behind the Synthron plant which leads into the Catawba River.

Properties recognized for their historic significance date primarily to the late 19th and early 20th centuries, the period of more dense development. They include public facilities, such as the state school for the deaf, numerous private homes and former business facilities, as well as several historic districts. They reflect the development of the area by yeoman farmers, and later cotton planters who had plantations, as well as the development of cotton and textile mills, followed by other industries.

Morganton is located in central Burke County at Lua error in Module:Coordinates at line 668: callParserFunction: function "#coordinates" was not found. (35.742585, -81.692360),[16] in the Catawba River valley in the foothills of the Appalachian Mountains. Interstate 40 passes through the southern part of the city, leading east 19 miles (31 km) to Hickory and west 54 miles (87 km) to Asheville. U.S. Route 70 passes east-west through the center of the city paralleling I-40, and U.S. Route 64 passes north-south, leading northeast 15 miles (24 km) to Lenoir and southwest 32 miles (51 km) to Rutherfordton. 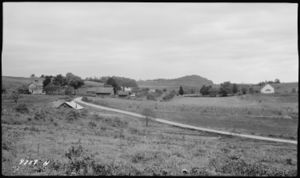 There were 7,618 households out of which 22.6% had children under the age of 18 living with them, 43.1% were married couples living together, 12.9% had a female householder with no husband present, and 39.7% were non-families. 34.5% of all households were made up of individuals and 14.4% had someone living alone who was 65 years of age or older. The average household size was 2.31 and the average family size was 2.92.

The state of North Carolina is a major employer in Morganton. State-operated facilities located in Morganton include Broughton Hospital (a psychiatric hospital) and the North Carolina School for the Deaf. Other employers include furniture manufacturing facilities and businesses catering to the many tourists who travel through the area on Interstate 40 to nearby attractions in the Blue Ridge Mountains.

15 miles outside of Morganton is Lake James, which is surrounded by the Blue Ridge Mountains.[35][36] There are also multiple ski areas located approximately an hour from Morganton.[37]

Morganton is the setting of Master of the World (1904), one of French science fiction writer Jules Verne's last novels. The book describes Morganton as Verne saw it in the late 19th century. The town is the place where people see a great machine that can travel in four different ways (air, above water, below water, and land). They first spot the machine over a mountain referred to as "the Great Eyrie" and described as flat-topped. Most local residents believe this stands for Table Rock.