The Mornos (Greek: Μόρνος) is a river in Phocis and Aetolia-Acarnania in Greece. Its source is in the southwestern part of the Oiti mountains, near the village Mavrolithari, Phocis. It flows towards the south, and enters the Mornos Reservoir near the village Lefkaditi. The dam was completed in 1979.[1] It leaves the reservoir towards the west, near Perivoli. The river continues through a deep, sparsely populated valley, and turns south near Trikorfo. The lower course of the Mornos forms the boundary between Phocis and Aetolia-Acarnania. The Mornos empties into the Gulf of Corinth about 3 km southeast of Nafpaktos. 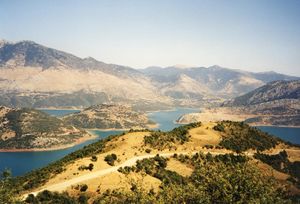 The Mornos reservoir, seen from the northwest

Places along the river