Piracy in the Sulu Sea 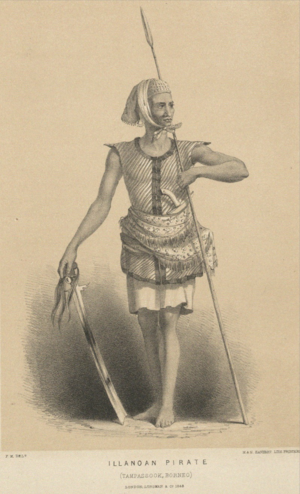 A Sulu pirate carrying a kampeli sword in his hand, a spear and a kris.

Piracy in the Sulu Sea, occurred in the vicinity of Mindanao where frequent acts of piracy against the Spanish, occurred. Because of the continual wars between Spain and the Moro people, the areas in and around the Sulu Sea became a haven for piracy which was not suppressed until the beginning of the 20th century. The pirates should not be confused with the naval forces or privateers of the various Moro tribes. However, many of the pirates operated under government sanction during time of war.[1][2]

The pirate ships used by the Moros were known as proa, or garays, and they varied in design. The majority were wooden sailing galleys about ninety feet long with a beam of ten feet 27.4 by 6.1 m. They carried around fifty to 100 crewmen. Moros usually armed their vessels with three swivel guns, called lelahs or lantakas, and occasionally a heavy cannon, proas were very fast and the pirates would prey on merchant ships becalmed in shallow water as they passed through the Sulu Sea. Slave trading and raiding was also very common, the pirates would assemble large fleets of proas and attack coastal towns. Hundreds of Christians were captured and imprisoned over the centuries, many were used as galley slaves aboard the pirate ships.[3][4]

Other than muskets and rifles, the Moro pirates, as well as the navy sailors and the privateers, used a sword called the kris with a wavy blade incised with blood channels. The wooden or ivory handle was often heavily ornamented with silver or gold. The type of wound inflicted by its blade makes it difficult to heal. The kris was used often used in boarding a vessel. Moros also used a Kampilan, another sword, a knife, or barong and a spear, made of bamboo and an iron spearhead. The Moro's swivel guns were not like more modern guns used by the world powers but were of a much older technology, making them largely inaccurate, especially at sea. Lantakas dated back to the 16th century and were up to six feet long, requiring several men to lift one. They fired up to a half-pound cannonball or grape shot. A lantaka was bored by hand and were sunk into a pit and packed with dirt to hold them in a vertical position. The barrel was then bored by a company of men walking around in a circle to turn drill bits by hand.[2]

The Spanish engaged the Moro pirates frequently in the 1840s. The expedition to Balanguingui in 1848 was commanded by Brigadier José Ruiz with a fleet of nineteen small warships and hundreds of Spanish Army troops. They were opposed by at least 1,000 Moros holed up in four forts with 124 cannons and plenty of small arms. There were also dozens of proas at Balanguingui but the pirates abandoned their ships for the better defended fortifications. The Spanish stormed three of the positions by force and captured the remaining one after the pirates had retreated. Over 500 prisoners were freed in the operation and over 500 Moros were killed or wounded, they also lost about 150 proas. The Spanish lost twenty-two men killed and around 210 wounded. The pirates later reoccupied the island in 1849: another expedition was sent which encountered only light resistance.

According to a legend, the Rungus in Sabah also fought a battle to protect their homeland on the northern tip of Borneo against the Moro pirates in a place later named Tanjung Simpang Mengayau.[5][6]

Also in the 1840s, Captain James Brooke became the White Rajah of Sarawak and he led a small navy in a series of campaigns against the Moro pirates. In 1843 Brooke attacked the pirates of Malludu and in June 1847 he participated in a major battle with pirates at Balanini where dozens of proas were captured or sunk. Brooke fought in several more anti-piracy actions in 1849 as well. During one engagement off Mukah with Illanun Sulus in 1862, Brooke sank four proas, out of six engaged, by ramming them with his small four-gun steamship Rainbow. Each pirate ship had over 100 crewmen and galley slaves aboard and was armed with three brass swivel guns. Brooke lost only a few men killed or wounded while at least 100 pirates were killed or wounded. Several prisoners were also released.[4][7]

On 17 October 2014, 10 Vietnamese fishermen working for Malay employer were attacked by Filipino pirates.[10]