Morpeth is the county town[1] of Northumberland in the northeast of England, lying on the River Wansbeck. Nearby villages include Mitford and Pegswood, In the 2011 census, the population of Morpeth was given as 14,017, up from 13,833 in the 2001 census.[2]

The name literally means 'murder path', though the incident that gave rise to this grisly appellation is no longer known. However, the more likely meaning of the name is literally "the path across the moor" [3][4]

Morpeth grew up at an important crossing point of the Wansbeck.[5] Remains from prehistory are scarce but the earliest evidence of occupation found is a stone axe thought to be from the Neolithic period. There is also a lack of evidence pointing to activity during the Roman occupation of Britain, although it is considered likely that settlements existed in the area at this time.[6] Following the Norman Conquest the town came into the possession of the de Merlay family, and a motte and bailey castle had been constructed by 1095.[5] Newminster Abbey was founded by Ranulf de Merlay, lord of Morpeth, and his wife, Juliana, daughter of Gospatric II, Earl of Lothian, as one of the first daughter houses of Fountains in 1138.[7] The town became a borough by prescription. King John granted a market charter for the town to Roger de Merlay in 1199.[8] The market is still held on Wednesdays. The town was badly damaged by fire in 1215 during the First Barons' War.[9] In the thirteenth century a stone bridge was built over the Wansbeck, replacing the ford previously in use.[5] Morpeth Castle was built in the fourteenth century by Ranulph de Merlay on the site of an earlier fortress: only the gatehouse (which was restored by the Landmark Trust in 1990 and now operates as a holiday rental} and parts of the ruined castle walls remain.[9]

For some months in 1515–16 Margaret Tudor (Henry VIII's sister) and Queen Consort of Scotland (James IV's widow) lay ill at Morpeth Castle, having been brought there from Harbottle Castle.

In 1540 Morpeth was described by the royal antiquary John Leland, as "long and metely well-builded, with low houses", and as "a far fairer town than Alnwick". During the 1543–50 war of the Rough Wooing, life in Morpeth was disturbed by a garrison of Italian mercenaries, who 'pestered such a little street standing in the highway' by killing deer and withholding payment for food.[10]

In 1552, William Hervey, Norroy King of Arms granted the borough of Morpeth a coat of arms. The arms were identical to those of Roger de Merlay, with the addition of a gold tower. In the letters patent, Hervey noted that he had included the arms of the "noble and valyaunt knyght"... "for a p'petuall memory of his good will and benevolence towardes the said towne ".[11]

Morpeth received its first charter of incorporation from Charles II. The corporation it created was controlled by seven companies or trade guilds : the Merchant Tailors, the Tanners, the Fullers and Dyers, the Smiths, the Cordwainers, the Weavers and the Butchers.[9] This remained the governing charter until the borough was reformed by the Municipal Corporations Act 1835.

Until the nineteenth century Morpeth had one of the main markets in northern England for live cattle.[9] The opening of the railways made transport to Newcastle easier, and the market accordingly declined.[5]

During the Second World War, Royal Air Force Morpeth opened at nearby Tranwell and was a notable air-gunnery training school.[12]

The town and the county's history and culture are celebrated at the annual Northumbrian Gathering.[13]

As with the rest of the British Isles, Morpeth experiences a maritime climate with cool summers and mild winters. There is a Met Office weather station providing local climate data at Cockle Park, a short distance to the north of the town.

In September 2012, flooding occurred again, causing damage to properties, although floodwaters were reportedly 3 feet (1 m) shallower than in 2008.[17]

The lower tier is Morpeth Town Council with 15 members. Morpeth is a civil parish with the status of a town. For the purposes of parish elections the town is divided into four wards: North Central, Kirkhill, Stobhill and South, each returning between three and five town councillors.[18]

The upper tier of local government is Northumberland County Council. Since April 2009 the county council has been a unitary authority. Previous to this there was an intermediate tier, the non-metropolitan district of Castle Morpeth, which has been abolished along with all other districts in the county. The county council has 67 members, of whom 3 represent the electoral divisions of Morpeth Kirkhill, Morpeth North and Morpeth Stobhill. Since the 2013 County Council elections, Morpeth Kirkhill is represented by a Liberal Democrat, Morpeth North is represented by a Conservative Councillor, and Morpeth Stobhill is held by an independent Councillor.[19]

The A1 road provides a link to Edinburgh and Newcastle. Morpeth railway station has direct trains to London taking a little over three hours. Morpeth has what is reputed to be the severest curve on any main railway line in Britain which has been the scene of several train crashes over the years.

The local state school, King Edward VI School, was established in 1552 by royal charter as Morpeth Grammar School. [20] It was formerly a chantry school, established in the 14th century but which had been abolished in 1547 before its refounding. It is included in the list of the oldest schools in the United Kingdom. It gained Beacon and Leading Edge status in 2003 and 2004.

There are two middle schools in Morpeth built next door to one another: Newminster and Chantry. 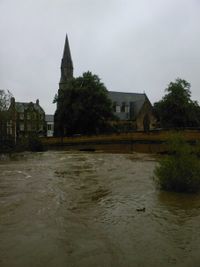 St George's Church and Telford Bridge during the September 2008 floods.

The ancient Church of England parish church of Morpeth is St Mary's at Highchurch. The oldest remaining parts of the structure belong to the Transitional Early English style of the mid to late 12th century. The church, which was the only Anglican place of worship in tha area until the 1840s, has been restored on a number of occasions.[21]

The grave of Emily Wilding Davison, the suffragette who was killed when she fell under the King's horse during the Epsom Derby in 1913, lies in St Mary's graveyard. Her gravestone bears the slogan of the Women's Social and Political Union: "Deeds not words".[21]

The need for a second church, in the centre of the town, was apparent by 1843. Accordingly, the church of St James the Great was consecrated for worship on 15 October 1846. Benjamin Ferrey designed the church in a "Neo Norman" style, based on the twelfth century Monreale Cathedral, Sicily.[22]

A third church, St Aidan's, was founded in 1957 as a mission church to the Stobhill estate, on the south east of the town. It is a red brick 20th-century building with a vaulted roof.[23]

The Roman Catholic Church, dedicated to St Robert of Newminster, was built off Oldgate on land adjacent to Admiral Lord Collingwood's house. It opened in August 1850.[24] Collingwood House is now the presbytery (residence) for the priest in charge of the church.

There has been a Presbyterian ministry in Morpeth since 1693. The first service took place in a tannery loft in the town in February 1693 before a chapel (still surviving as a private house) was built in 1721 in Cottingwood Lane. The foundation stone of the present St George's United Reformed Church was laid in 1858. The first service in the building was held on 12 April 1860. [25] Standing immediately to the north of the Telford Bridge, the building is in the early English style and includes a stained glass rose window. It is notable for its octagonal spirelet.[26]

The present Methodist church in Howard Terrace was opened as a Primitive Methodist place of worship on 24 April 1905. It was built from local quarry stone, and was designed by J Walton Taylor. Although the Primitive Methodists were united with the Wesleyan Church to form the Methodist Church of Great Britain in 1932, a separate Wesleyan church continued to function in Manchester Street until 1964, when the congregations were united at Howard Terrace.[27]

Sport is popular in the town: Morpeth Town A.F.C., Morpeth RUFC, the cricket, hockey and tennis club and the golf club all play competitively. The Morpeth Harriers cater for those wishing to compete in athletics. The town also offers opportunities to play sport on a non-competitive basis through facilities such as Carlisle Park, the common and the leisure centre.

The Morpeth Olympic Games, a professional event consisting mainly of athletics and wrestling, were staged from 1873 until 1958, barring interruptions for the two world wars.[28] The Games were held on the Old Brewery Field until 1895, then at Grange House Field until the First World War. After two years at the town's cricket pitch at Stobhill (1919–20), the Olympics moved to Mount Haggs Field until 1939, and then back to Grange House Field from 1945 until 1958.[citation needed]

There was a racecourse where horse racing events were held from 1730 until the mid 19th century.[29] 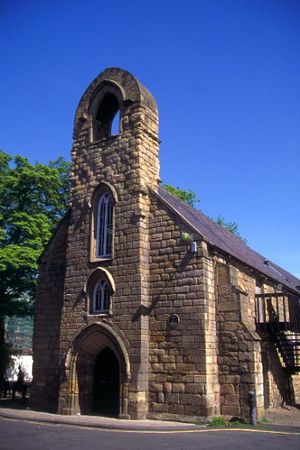 The historical layout of central Morpeth consists of Bridge Street and Newgate Street, with burgage plots leading off them. Traces of this layout remain: Old Bakehouse Yard off Newgate Street is a former burgage plot, as is Pretoria Avenue, off Oldgate. The town stands directly on what used to be the Great North Road, the old coaching route between London and Edinburgh, and several old coaching inns are still to be found in the town, including the Queen's Head, the Waterford Lodge and the Black Bull. Morpeth's Mafeking Park at the bottom of Station Bank at the intersection with the Great North Road was unofficially considered to be the smallest park in Britain. It was originally a triangle of land bounded by roads but after road improvements is now a small roundabout.[32]