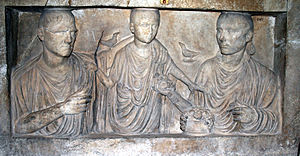 The mos maiorum ("ancestral custom"[1] or "way of the elders," plural mores, with maiorum a genitive plural; cf. English "mores") is the unwritten code from which the ancient Romans derived their social norms. It is the core concept of Roman traditionalism,[2] distinguished from but in dynamic complement to written law. The mos maiorum was collectively the time-honoured principles, behavioural models, and social practices that affected private, political, and military life in ancient Rome.[3]

The Roman family (the familia, better translated as "household" than "family") was hierarchical, as was Roman society. These hierarchies were traditional and self-perpetuating, that is, they supported and were supported by the mos maiorum. The pater familias, or head of household, held absolute authority over his familia, which was both an autonomous unit within society and a model for the social order,[4] but he was expected to exercise this power with moderation and to act responsibly on behalf of his family. The risk and pressure of social censure if he failed to live up to expectations was also a form of mos.[citation needed]

The distinctive social relationship of ancient Rome was that between patron (patronus) and client (cliens). Although the obligations of this relationship were mutual, they were also hierarchical. The relationship was not a unit, but a network (clientela), as a patronus might himself be obligated to someone of higher status or greater power, and a cliens might have more than one patron, whose interests might come into conflict. If the familia was the discrete unit underlying society, these interlocking networks countered that autonomy and created the bonds that made a complex society possible.[5] Although one of the major spheres of activity within patron-client relations was the law courts, patronage was not itself a legal contract; the pressures to uphold one's obligations were moral, founded on the quality of fides, "trust" (see Values below), and the mos.[6] Patronage served as a model[7] when conquerors or governors abroad established personal ties as patron to whole communities, ties which then might be perpetuated as a family obligation. In this sense, mos becomes less a matter of unchanging tradition than precedent.[8]

Roman conservatism finds succinct expression in an edict of the censors from 92 BCE, as preserved by the 2nd-century historian Suetonius: “All new that is done contrary to the usage and the customs of our ancestors, seems not to be right.”[9] But because the mos maiorum was a matter of custom, not written law, the complex norms it embodied evolved over time. The ability to preserve a strongly centralized sense of identity while adapting to changing circumstances permitted the expansionism that took Rome from city-state to world power.[10] The preservation of the mos maiorum depended on consensus and moderation among the ruling elite, whose competition for power and status threatened it.[11]

Democratic politics driven by the charismatic appeal of individuals (populares) to the Roman people (populus) potentially undermined the conservative principle of the mos.[12] Because the higher magistracies and priesthoods were originally the prerogative of the patricians, the efforts of plebeians (the plebs) for access could be cast as a threat to tradition (see Conflict of the Orders). Reform was accomplished through legislation, and written law replaced consensus.[13] When plebeians gained admission to nearly all the highest offices except for a few arcane priesthoods, the interests of plebeian families who ascended to the elite began to align with those of the patricians, creating Rome's nobiles, an elite social status of nebulous definition during the Republic.[14] The plebs and their support of popular politicians continued as a threat to the mos and elite consensus into the late Republic, as evidenced in the rhetoric of Cicero.[15]

The auctoritas maiorum ("ancestral authority") could be evoked to validate social developments in the name of tradition. Following the collapse of the Republic after the death of Julius Caesar, Augustus disguised his radical program under a piety toward the mos maiorum.[16]

During the transition to the Christian Empire, Symmachus argued that Rome's continued prosperity and stability depended on preserving the mos maiorum, while the early Christian poet Prudentius dismissed the blind adherence to tradition as "the superstition of old grandpas" (superstitio veterum avorum) and inferior to the new revealed truth of Christianity.[17]

Traditional Roman values were essential to the mos maiorum.[citation needed] These include: