From Infogalactic: the planetary knowledge core
Jump to: navigation, search
For other uses, see Moselle (disambiguation). 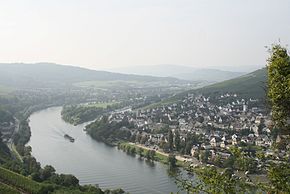 Beilstein on the Moselle

The Moselle (French: Moselle, IPA: [mɔzɛl]; German: Mosel; Luxembourgish: Musel) is a river flowing through France, Luxembourg, and Germany. It is a left tributary of the Rhine, which it joins at Koblenz. A small part of Belgium is also drained by the Moselle through the Sauer and the Our.

Its name comes from the Latin Mosella, meaning the "Little Meuse" (Mosa in Latin). The river gave its name to two French départements: Moselle and Meurthe-et-Moselle.

The source of the Moselle is at the western slope of the Ballon d'Alsace in the Vosges mountains. The Moselle flows through the Lorraine region, west of the Vosges. Further downstream, in Germany, the Moselle valley forms the division between the Eifel and Hunsrück mountain regions. Its total length from source to mouth is approximately 546 kilometres (339 mi). 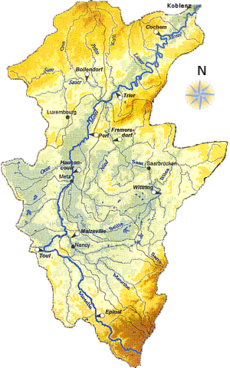 Towns along the Moselle River are:

The Moselle was celebrated in Mosella, a Latin poem by Ausonius (4th century). In the 20th century, the river and the folklore and local history of the towns along its banks were described by British travel writer Roger Pilkington. In the tale, "The Seven Swabians" of the Brothers Grimm, the eponymous Swabians drown trying to cross the Moselle.

The Moselle valley between Metz and Thionville is an industrial area, with coal mining and steel manufactures.

The Moselle valley is famous for its beautiful scenery and the excellent wine produced. Most well-known is the German Mosel wine region, while the Luxembourgish winegrowing region is called Moselle Luxembourgeoise and the French region is called AOC Moselle. Most notable among the wines produced here are Riesling, Elbling, Müller-Thurgau, Kerner, and Auxerrois. The German part of the Moselle is a popular tourist destination. An important asset is today's Moselradweg, the 311-kilometre (193 mi) long cycleway from Metz to Koblenz, which also connects to nine other cycleways. 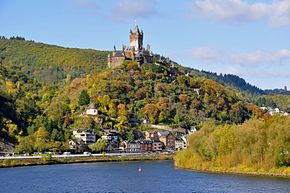 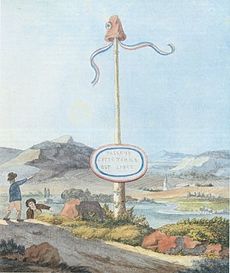 A liberty pole erected by the Moselle during the French Revolution, water colour by Goethe, 1793