From Infogalactic: the planetary knowledge core
Jump to: navigation, search
This article is about the French department. For the major European river, see Moselle. For other uses, see Moselle (disambiguation).

Moselle (French pronunciation: ​[mɔ.zɛl]) is a department in the east of France named after the river Moselle. 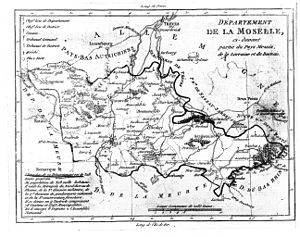 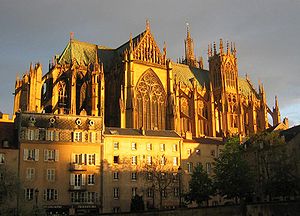 Moselle is one of the original 83 departments created during the French Revolution on March 4, 1790. It was created from the former province of Lorraine.

In 1793 France annexed the German enclaves of Manderen, Lixing-lès-Rouhling, Momerstroff, and Créhange (Kriechingen) - all possessions of princes of the German Holy Roman Empire - and incorporated them into the Moselle département.

By the Treaty of Paris of 1814 following the first defeat and abdication of Napoleon, France had to surrender almost all the territory it had conquered since 1792. In northeastern France, the Treaty did not restore the 1792 borders, however, but defined a new frontier to put an end to the convoluted nature of the border, with all its enclaves and exclaves. As a result, France ceded the exclave of Tholey (now in Saarland, Germany) as well as a few communes near Sierck-les-Bains (both territories until then part of the Moselle département) to Austria. On the other hand, the Treaty confirmed the French annexations of 1793, and furthermore, the south of the Napoleonic département of Sarre was ceded to France, including the town of Lebach, the city of Saarbrücken, and the rich coal basin nearby. France thus became a net beneficiary of the Treaty of Paris: all the new territories ceded to her being far larger and more strategic than the few territories ceded to Austria. All these new territories were incorporated into the Moselle department, and so Moselle had now a larger territory than ever since 1790.

However, with the return of Napoleon (March 1815) and his final defeat at the Battle of Waterloo (June 1815), the Treaty of Paris in November 1815 imposed much harsher conditions on France. Tholey and the communes around Sierck-les-Bains were still to be ceded as agreed in 1814, but the south of the Sarre department with Saarbrücken was withdrawn from France. In addition, France had to cede to Austria the area of Rehlingen (now in Saarland) as well as the strategic fort-town of Saarlouis and the territory around it, all territories and towns which France had controlled since the 17th century, and which formed part of the Moselle department since 1790. At the end of 1815 Austria transferred all these territories to Prussia. (So later France could directly invade Prussia, starting on 2 August 1870 the Franco-German War, which it had declared on North Germany on 19 July, with the French Army of the Rhine Corps II and III conquering Saarbrücken.[1] And from the Saar basin the Prussian forces subsequently counterattacked and invaded France, supported by North Germany and the southern German states and defeating France in 1871.)

Thus, by the end of 1815, the Moselle department had finally the limits that it would keep until 1871. It was slightly smaller than at its creation in 1790, the incorporation of the Austrian enclaves not compensating for the loss of Saarlouis, Rehlingen, Tholey, and the communes around Sierck-les-Bains. Between 1815 and 1871, the department had an area of 5,387 km² (2,080 sq. miles). Its prefecture (capital) was Metz. It had four arrondissements: Metz, Briey, Sarreguemines, and Thionville.

After the French defeat in the Franco-Prussian War of 1870-1871, almost all of the Moselle department, along with Alsace and portions of the Meurthe and Vosges departments, went to the German Empire by the Treaty of Frankfurt on the ground that the population in those areas spoke German dialects. Bismarck spared only one-fifth of Moselle (the arrondissement of Briey in the extreme west of the department) from annexation, as it was a French-speaking area. (Bismarck later bitterly regretted his decision when it was discovered that the region of Briey and Longwy had rich iron-ore deposits.) The Moselle department ceased to exist on May 18, 1871, and the eastern four-fifths of Moselle returned to Germany merged with the also German-annexed eastern third of the Meurthe Department into the German Department of Lorraine, based in Metz, within the newly established Imperial State of Alsace-Lorraine. France merged the remaining area of Briey with the truncated Meurthe department to create the new Meurthe-et-Moselle department (a new name chosen on purpose to remind people of the lost Moselle department) with its préfecture at Nancy. 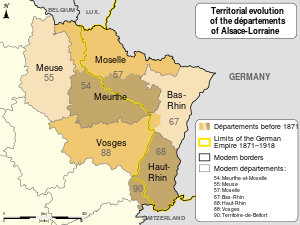 The departments of Alsace and Lorraine

In 1919, following the French victory in the First World War, Germany returned Alsace-Lorraine to France under the terms of the Treaty of Versailles. However, it was decided not to recreate the old separate departments of Meurthe and Moselle by reverting to the old department borders of before 1871. Instead, Meurthe-et-Moselle was left untouched, and the German Region of Lorraine (Bezirk Lothringen) was reconstituted as the new department of Moselle. Thus, the Moselle department was reborn, but with quite different borders from those before 1871. Having lost the area of Briey, it had now gained the areas of Château-Salins and Sarrebourg which before 1871 had formed one-third of the Meurthe department and which had been part of the Reichsland of Alsace-Loraine since 1871.

The new Moselle department now reached its current area of 6,216 km² (2,400 sq. miles), larger than the old Moselle because the areas of Château-Salins and Sarrebourg were far larger than the area of Briey and Longwy.

During World War II Germany again annexed Moselle from France: it became part of the Gau Westmark in accordance with the armistice of June 22, 1940. Adolf Hitler considered Moselle and Alsace part of Germany and as a result had the eligible inhabitants drafted into the German Wehrmacht.

The American army liberated Moselle in 1944 and it returned to France with the same frontiers that it had had in 1919. As a result of the war and the German aggression, both the French government and the local population shunned the Germanic heritage of the region. The local German Lorraine Franconian dialects more or less fell into disuse in the public realm. Recently[when?], efforts have been made[by whom?] to revive the dialects and distinct culture of the region, as with the onset of open borders and cordial Franco-German relations the language no longer has associations with the war.

Moselle is part of the current region of Alsace-Champagne-Ardenne-Lorraine and is surrounded by the French departments of Meurthe-et-Moselle and Bas-Rhin, as well as Germany (states of Saarland and Rhineland-Palatinate) and Luxembourg in the north. Parts of Moselle belong to Parc naturel régional de Lorraine.

The following are the most important rivers:

The inhabitants of the department are called Mosellans in French.

The population has remained relatively stable since World War II and now exceeds 1 million, located mostly in the urban area around Metz and along the river Moselle.

If the Moselle department still existed in its limits of between 1815–1871, its population at the 1999 French census would have been 1,089,804 inhabitants. The current Moselle department, whose limits were set in 1919, had less population, with only 1,023,447 inhabitants. This is because the industrial area of Briey and Longwy lost in 1871 is more populated than the rural areas of Château-Salins and Sarrebourg gained in 1919.

A significant minority of inhabitants of the department (fewer than 100,000) speak a Germanic dialect known as platt lorrain or Lothringer Platt (see Lorraine Franconian and Linguistic boundary of Moselle).

Linguistically, Platt can be further subdivided into three varieties, going from east to west: Rhenish Franconian, Moselle Franconian, and Luxembourgish.

Moselle and Alsace to its east have their own laws in certain fields. The statutes in question date primarily from the period 1871 - 1919 when the area was part of the German Empire. With the return of Alsace-Lorraine to France in 1919, many in central government assumed that the recovered territories would be subject to French law.

Local resistance to a total acceptance of French law arose because some of Bismarck's reforms included strong protections for civil and social rights. After much discussion and uncertainty, Paris accepted in 1924 that pre-existing German law would apply in certain fields, notably hunting, economic life, local government relationships, health insurance, and social rights. Many of the relevant statues continue to be referred to in the original German, as they have never been formally translated.

One major difference with French law is the absence of the formal separation between church and state: several mainstream denominations of the Christian church as well as the Jewish faith[2] benefit from state funding, despite principles applied rigorously in the rest of France.