Mother of the Church 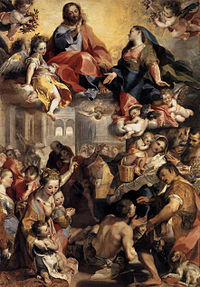 Madonna del Popolo (Madonna of the people) by Federico Barocci, 1579

In Roman Catholic Mariology, Mother of the Church (in Latin Mater Ecclesiae) is a title, officially given to Mary during the Second Vatican Council by Pope Paul VI.[1] The title was first used in the 4th century by Saint Ambrose of Milan, as rediscovered by Hugo Rahner.[1][2]

The title "Mother of the Church" was used by Pope Benedict XIV in 1748[3] and then by Pope Leo XIII in 1885.[4] Following the title's usage by Leo XIII, it was later used many times in the teachings of John XXIII and Paul VI.[5] The title was also used by Pope John Paul II[6][7] and is used in the Catechism of the Catholic Church.[8]

Pope John Paul II stated that overall the title indicates the Blessed Virgin Mary's maternity of Christ's faithful, as deriving from her maternity of Christ in that "Mary is present in the Church as the Mother of Christ, and at the same time as that Mother whom Christ, in the mystery of the Redemption, gave to humanity in the person of the Apostle John [cf. John 19:27]. Thus, in her new motherhood in the Spirit, Mary embraces each and every one in the Church, and embraces each and every one through the Church."[9]

The use of the Mater Ecclesiae title to the Virgin Mary goes back to Ambrose of Milan in the 4th century, but this was not known until its 1944 rediscovery by Hugo Rahner.[1][2] Rahner's Mariology, following Ambrose, sees Mary in her role within the Church. His interpretation, based solely on Ambrose and the early Fathers,[2] greatly influenced Vatican II[10] and Pope Paul VI,[11] who, quoting Ambrose, declared Mary the "mother of the Church", a view continued by Popes John Paul II and Benedict XVI, who, prior to his election to the papacy, stated that it was Hugh Rahner's "greatest achievement".[citation needed]

The Mother of the Church, carries on in heaven her maternal role with regard to the members of Christ, cooperating in the birth and development of divine life in the souls of the redeemed. - Pope Paul VI's "Credo of the People of God".[12][13]

Pope Paul VI pronounced the title at the closing of the third phase of the council completely on his own.[14] A former archbishop of Milan, Paul VI used similar language to that of Saint Ambrose of Milan, calling Mary Model of the Church in light of her faith, love and complete unity with Christ and Mother of the Church because she gave birth to Christ.[15]

Paul VI made the pronouncement of the title Mother of the Church during his speech upon the closing of the third session of the Second Vatican Council on November 21, 1964: "For the glory of the Virgin and our consolation, we proclaim Mary the Most Holy Mother of the Church, that is, the Mother of the whole People of God, both the faithful and the pastors."[11]

In Redemptoris Mater Pope John Paul II referred to Paul VI's "Credo of the People of God" as a reaffirmation of the statement that Mary is the "mother of the entire Christian people, both faithful and pastors" and wrote that the Credo "restated this truth in an even more forceful way":[12]

Pope Benedict XVI also referred to the Credo of Paul VI and stated that it sums up all of the scriptural texts that relate to the matter.[13]

In 1987, Pope John Paul II repeated this title Mother of the Church in his encyclical Redemptoris Mater and at a general audience on September 17, 1997.[16]

Mary is present in the Church as the Mother of Christ, and at the same time as that Mother whom Christ, in the mystery of the Redemption, gave to humanity in the person of the Apostle John. Thus, in her new motherhood in the Spirit, Mary embraces each and every one in the Church, and embraces each and every one through the Church. In this sense Mary, Mother of the Church, is also the Church's model. Indeed, as Paul VI hopes and asks, the Church must draw "from the Virgin Mother of God the most authentic form of perfect imitation of Christ."[17]

On September 17, 1997, St. Pope John Paul II devoted a Wednesday general audience to the title "Mother of the Church" with regard to its application to the Blessed Virgin Mary.

The title "Mother of the Church" thus reflects the deep conviction of the Christian faithful, who see in Mary not only the mother of the person of Christ, but also of the faithful.[19]

Pope Benedict XVI addresses the issue, why Roman Catholic Mariology is related to ecclesiology, the teaching about the Church. On first sight, he argues, it may seem accidental, that the Council moved Mariology into ecclesiology. This relation helps to understand what "Church" really is. The theologian Hugo Rahner showed that Mariology was originally ecclesiology. The Church is like Mary.[20]

The Church is virgin and mother, she is immaculate and carries the burdens of history. She suffers and she is assumed into heaven. Slowly she learns, that Mary is her mirror, that she is a person in Mary. Mary on the other hand is not an isolated individual, who rests in herself. She is carrying the mystery of the Church.[20]