In physics, motion is a change in position of an object with respect to time. Motion is typically described in terms of displacement, distance (scalar), velocity, acceleration, time and speed.[1] Motion of a body is observed by attaching a frame of reference to an observer and measuring the change in position of the body relative to that frame.

If the position of a body is not changing with respect to a given frame of reference the body is said to be at rest, motionless, immobile, stationary, or to have constant (time-invariant) position. An object's motion cannot change unless it is acted upon by a force, as described by Newton's first law. Momentum is a quantity which is used for measuring motion of an object. An object's momentum is directly related to the object's mass and velocity, and the total momentum of all objects in an isolated system (one not affected by external forces) does not change with time, as described by the law of conservation of momentum.

As there is no absolute frame of reference, absolute motion cannot be determined.[2] Thus, everything in the universe can be considered to be moving.[3]:20–21

More generally, motion is a concept that applies to objects, bodies, and matter particles, to radiation, radiation fields and radiation particles, and to space, its curvature and space-time. One can also speak of motion of shapes and boundaries. So, the term motion in general signifies a continuous change in the configuration of a physical system. For example, one can talk about motion of a wave or about motion of a quantum particle, where the configuration consists of probabilities of occupying specific positions. 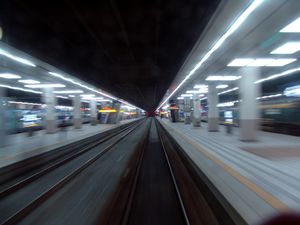 Motion involves a change in position, such as in this perspective of rapidly leaving Yongsan Station.

In physics, motion is described through two sets of apparently contradictory laws of mechanics. Motions of all large scale and familiar objects in the universe (such as projectiles, planets, cells, and humans) are described by classical mechanics. Whereas the motion of very small atomic and sub-atomic objects is described by quantum mechanics.

Classical mechanics is used for describing the motion of macroscopic objects, from projectiles to parts of machinery, as well as astronomical objects, such as spacecraft, planets, stars, and galaxies. It produces very accurate results within these domains, and is one of the oldest and largest subjects in science, engineering, and technology.

Classical mechanics is fundamentally based on Newton's laws of motion. These laws describe the relationship between the forces acting on a body and the motion of that body. They were first compiled by Sir Isaac Newton in his work Philosophiæ Naturalis Principia Mathematica, first published on July 5, 1687. His three laws are:

Newton's three laws of motion, along with his Newton's law of motion, which were the first to accurately provide a mathematical model for understanding orbiting bodies in outer space. This explanation unified the motion of celestial bodies and motion of objects on earth.

Quantum mechanics is a set of principles describing physical reality at the atomic level of matter (molecules and atoms) and the subatomic (electrons, protons, and even smaller particles). These descriptions include the simultaneous wave-like and particle-like behavior of both matter and radiation energy, this is described in the wave–particle duality.[citation needed]

In addition to describing the motion of atomic level phenomena, quantum mechanics is useful in understanding some large scale phenomenon such as superfluidity, superconductivity, and biological systems, including the function of smell receptors and the structures of proteins.[citation needed]

Humans, like all known things in the universe, are in constant motion,[3]:8–9 however, aside from obvious movements of the various external body parts and locomotion, humans are in motion in a variety of ways which are more difficult to perceive. Many of these "imperceptible motions" are only perceivable with the help of special tools and careful observation. The larger scales of "imperceptible motions" are difficult for humans to perceive for two reasons: 1) Newton's laws of motion (particularly Inertia) which prevent humans from feeling motions of a mass to which they are connected, and 2) the lack of an obvious frame of reference which would allow individuals to easily see that they are moving.[5] The smaller scales of these motions are too small for humans to sense.

The cells of the human body have many structures which move throughout them.