pronunciation (help·info)) is a popular hill station in the Aravalli Range in Sirohi district of Rajasthan state in western India near the border with Gujarat. The mountain forms a distinct rocky plateau 22 km long by 9 km wide. The highest peak on the mountain is Guru Shikhar at 1,722 m (5,650 ft) above sea level. It is referred to as 'an oasis in the desert' as its heights are home to rivers, lakes, waterfalls and evergreen forests. Nearest Railway station is Abu Road Railway station which is 27 km away.[2]

The ancient name of Mount Abu is Arbudaanchal. In the Puranas, the region has been referred to as Arbudaranya ("forest of Arbhuda") and 'Abu' is a diminutive of this ancient name. It is believed that sage Vashistha retired to the southern spur at Mount Abu following his differences with sage Vishvamitra. There is another mythology according to which a serpent named "Arbuda" saved the life of Nandi - Lord Shiva's bull. The incident happened on the mountain which is currently known as Mount Abu and so the mountain is named "Arbudaranya" after that incident which gradually became Abu.

The Arbuda Mountains (Abu Parvat ' Mount Abu) region is said to be original abode of the famous Gurjars. The association of the Gurjars with the mountain is noticed in many inscriptions and epigraphs including Tilakamanjari of Dhanpala.[3] These Gurjars (Gujars or Gujjars) migrated from Arbuda mountain region and as early as sixth century CE, they set up one or more principalities in Rajasthan and Gujarat. Almost all or a larger part of Rajasthan and Gujarat had been known as Gurjaratra (country ruled or protected by the Gurjars) or Gurjarabhumi (land of the Gurjars) for centuries prior to Mughal period.[4]

The conquest of Mount Abu in 1311 CE by Rao Lumba of Deora-Chauhan dynasty brought to an end the reign of the Parmars and also marked the decline of Mount Abu. He shifted the capital city to Chandravati in the plains. After the destruction of Chandravati in 1405, Rao Shasmal made Sirohi his headquarters. Later it was leased by the British government from the then Maharaja of Sirohi for use as the headquarters of the resident to Rajputana (another name for Rajasthan).

According to a legend, sage Vasishta performed a great yajna at the peak of Mount Abu, to seek from the gods a provision for the defense of righteousness on earth. In answer to his prayer, a youth arose from the Agnikunda(fire-altar)—the first Agnivansha Rajput.[5][6] 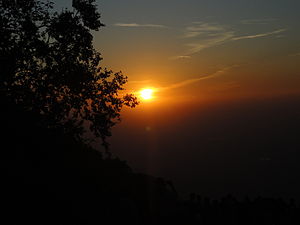 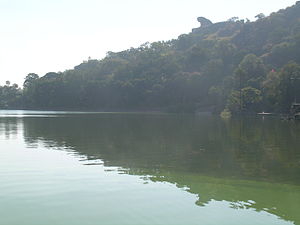 Nakki Lake with the Maharaja Jaipur Palace and Toad Rock.

Mount Abu town, the only hill station in Rajasthan, is located at an elevation of 1,220 m (4,003 ft). It has been a popular retreat from the heat of Rajasthan and neighbouring Gujarat for centuries. The Mount Abu Wildlife Sanctuary was established in 1960 and covers 290 km² of the mountain.

The mountain is also home to several Hindu temples, including the Adhar Devi Temple (also known as Arbuda Devi Temple), carved out of solid rock; the Shri Raghunathji Temple; and a shrine and temple to Dattatreya built atop the Guru Shikhar peak and a number of Jain temples including Dilwara Temples, a complex of temples carved of white marble that was built between the 11th and 13th centuries AD. The oldest of these is the Vimal Vasahi temple, built in 1021 AD by Vimal Shah and dedicated to the first of the Jain Tirthankaras and they include the Achaleswar Mahadev Temple (1412) and the Kantinath Temple (1513). It is also the location of the headquarters of the Brahma Kumaris.

The Achalgarh fort, built in the 14th century by Rana Kumbha of Mewar is nearby and at its center is the popular visitor attraction of the Nakki Lake. There is the Toad Rock on a hill near the lake. Close to the fort, is the Achaleshwar Mahadev Temple, a popular Shiva temple.

The Durga temple, Ambika Mata Temple lies in a cleft of rock in Jagat, just outside Mount Abu town.

In Mount Abu, the faith community of Brahma Kumaris has its spiritual headquarters, which are represented by its own account in 85 countries.[7] Every year about 2.5 million visitors are supposed to visit the sprawling campus of that spiritual movement.[8]

Place of Stay for tourists

While there are hundreds of hotels for tourists, some Dharamshalas can also be found for as low as Rs.400 per night. Raghunath Dharamshala at the bank of Nakki Lake is one of those in a Spiritual environment.

Summer Summer season prevails from mid of April to mid of June when average Maximum temperature remains around 36 °C. Therefore, it will be better if you bring light cotton clothes. These clothes are fit for the summers of Mount Abu.

Monsoon Due to its relief and geographical conditions, it rains well in Mount Abu during the monsoons. During the rainy season even the temperature falls down. Normal summer clothing will do. It is wiser to carry an umbrella in order to avoid being caught at the wrong side of monsoon.

Winter Winters are cool in Mount Abu, with mercury hovering around 16 °C to 22 °C. Nights are really chilly and average night temperature is around 4 to 12 °C. Nevertheless, there are instances when the temperature has dipped to as low as −2 to −3 °C. Heavy winter clothing is preferable. You can include long coats and outsiders in your luggage. In daytime, light pullovers are sufficient.