listen)), a potentially active volcano, is a stratovolcano which is the highest peak in Iran and the Middle East as well as the highest volcano in Asia (the Kunlun Volcanic Group in Tibet has a higher elevation than Damāvand, but are not considered to be volcanic mountains).[7][8] It has a special place in Persian mythology and folklore. This peak is located in the middle of the Alborz range, adjacent to Varārū, Sesang, Gol-e Zard and Mīānrūd. The mountain is located near the southern coast of the Caspian Sea, in Amol County, Mazandaran Province, 66 kilometres (41 miles) northeast of the city of Tehran.[9]

Damavand is a significant mountain in Persian mythology. It is the symbol of Iranian resistance against despotism and foreign rule in Persian poetry and literature. In Zoroastrian texts and mythology, the three-headed dragon Aži Dahāka was chained within Mount Damāvand, there to remain until the end of the world. In a later version of the same legend, the tyrant Zahhāk was also chained in a cave somewhere in Mount Damāvand after being defeated by Kāveh and Fereydūn. Persian poet Ferdowsi depicts this event in his masterpiece, the Shahnameh:

He brings Zahhak, himself a mountain
to the peak of Damavand and binds his neck.

The mountain is said to hold magical powers in the Shahnameh. Damāvand has also been named in the Iranian legend of Arash as the location he fired his arrow to mark the Iran border. The famous poem Damāvand by Mohammad Taqī Bahār is also one fine example of the mountain's significance in Persian literature. The first verse of this poem reads:

Mount Damavand is depicted on the reverse of the Iranian 10,000 rials banknote.[10]

Mount Damavand first erupted in the Pleistocene almost 1.78 million years ago. After several known eruptions around 600,000 and 280,000 years ago, it finally erupted about 7300 years ago in the Holocene. Its steep cone is formed of ash and lava flows that are mainly made of trachyte, andesite and basalt. The Quaternary lavas are directly located on the Jurassic sediments.[11] The volcano is crowned by a small crater with sulfuric deposits. There are also fumaroles, hot springs, and mineral deposits of travertine. Mount Damavand could be considered as a potentially active volcano,[12] since there are fumaroles near the summit crater emitting sulfur, which were known to be active on July 6, 2007.[13]

Mineral hot springs are mainly located on the volcano's flanks and at the base, giving evidence of volcanic heat comparatively near the surface of the earth. While no historic eruptions have been recorded, hot springs at the base and on the flanks, and fumaroles and solfatara near the summit, indicate a hot or cooling magma body still present beneath the volcano.

The most important of these hot springs are located in Abe Garm Larijan in a village by the name Larijan in the district of Larijan in Lar Valley. The water from this spring is useful in the treatment of chronic wounds and skin diseases. Near these springs there are public baths with small pools for public use.

Routes to the summit 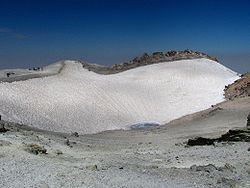 The best major settlement for mountain climbers is the new Iranian Mountain Federation Camp in the village of Polour, located on the south of the mountain.

There are at least 16 known routes[14] to the summit, with varying levels of difficulty. Some of them are very dangerous and require rock climbing. The most popular route is the Southern Route which has step stamps and a camp midway called Bargah Sevom Camp/Shelter[15] at 4220 m (about 13,845 ft). The longest route is the Northeastern and it takes two whole days to reach the summit starting from downhill village of Nāndal and a night stay at Takht-e Fereydoun (elevation 4300 m - about 13,000 ft), a two-story shelter. The western route is famous for its sunset view. Sīmorgh shelter in this route at 4100 m (about 13,500 ft) is a newly constructed shelter with two stories. There is a frozen waterfall/Icefall[16] (Persian name Ābshār Yakhī) about 12 m tall and the elevation of 5100 m is the highest fall in Iran and Middle East.

Damavand rivers and slopes are famous for the beautiful Brown Trout (Salmo trutta),[17][18]

On the southern slope of Damavand, there are remnants of Wild Pistachia Trees (Pistacia atlantica) ; In its riversides different kinds of Salix trees like Willow (Salix acomphylla) and Oleaster (Elaeagnus angustifolia) are found. Greek Juniper (Juniperus excelsa) is common all over the higher altitudes. On Northern slopes, because of higher humidity, there are wild oak, beech and hazel trees like: Persian Oak (Quercus macranthera), Eastern Hornbean (Carpinus orientalis), and Oriental beech (Fagus orientalis).[25] There are also many beautiful wild flowers like: Mountain Tulip (Tulipa montana) and Stone cress (Aethionema grandiflorum). At higher altitudes, shrubs tend to be sphere and cushion like, examples are : Astragalus species (like Astragalus microcephalus), Mountain Sainfoin (Onobrychis cornuta) and Prickly (Acantholimon erinaceum) ; Different kinds of grasses between them complete this alpine scene .[26] 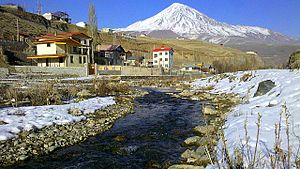