Mount Vernon Nazarene University (MVNU) is a private Christian liberal arts college located in Mount Vernon, Ohio, with satellite locations in the surrounding area. It was founded in 1968 by the Church of the Nazarene and offers a variety of Bachelor's and Master's degrees to both traditional and non-traditional students. MVNU is also home to Cougar Athletics.

The result of a 1960 education commission,[3] Mount Vernon Nazarene was first chartered as the Zone A College of the Church of the Nazarene in 1964 by the church's General Assembly.[4] A site in the town of Mount Vernon was chosen in 1966 for its proximity to a concentrated Nazarene population,[3] and Mount Vernon Nazarene College (MVNC) opened in 1968 on the old Lakeholm Farm property that had belonged to The Ohio State University.[5]

The Lakeholm Farm was the former home of Columbus Delano, U.S. Secretary of the Interior under Ulysses S. Grant.[5] Three buildings (Manor, Ice House, and Barn) original to Lakeholm Farm, are still in operation on the campus today. Originally a two-year junior college, MVNU became a four-year school in 1973,[6] was accredited for two-year degrees in 1972 and four-year degrees in 1974,[7] and graduate degrees in Christian ministry were added in 1991.[4] It was renamed Mount Vernon Nazarene University (MVNU) in 2002.

The town of Mount Vernon was just one of many sites proposed for the college, but it raised $209,000 USD to purchase a 209-acre portion of the Lakeholm Farm before the Church of the Nazarene bought it from The Ohio State University, which owned the property.[5] The colonial-style buildings were designed to resemble Williamsburg, Virginia.[8] Nine acres were added by Mary Starr in 1970, and the college acquired a neighboring 128-acre (0.52 km2) farm in 1999.[9]

MVNU is a co-educational liberal arts university with an evangelical Christian foundation and mission. It is part of the Church of the Nazarene's East Central District and much of its educational philosophy is based on the Wesleyan-Arminian holiness tradition. The university motto is: "To Seek to Learn is to Seek to Serve."[1]

The trustees of the college, organized in 1966, are representatives from each of these Ohio, Kentucky, and West Virginia districts.[4] Each college receives financial backing from the Nazarene churches in its region; part of each church budget is paid into a fund for its regional school. Each college or university is also bound by a gentlemen's agreement not to actively recruit outside its respective educational region.[12]

MVNU is accredited by The Higher Learning Commission[13] and all of its academic programs are submitted to the Ohio Board of Regents for approval. The university is a member of the Association of Independent Colleges and Universities of Ohio, the Council for Christian Colleges and Universities, the Council for Higher Education, and the Ohio Foundation of Independent Colleges, etc.

MVNU's main campus is along the southern edge of Mount Vernon. The campus consists of over fifteen different classroom and residence buildings. The main classroom buildings are: Faculty Hall, Regents Hall, Founders Hall, Jennie K. Moore, and The Jetter School of Business. Freshman entering the school live in one of three dorms: Pioneer or Galloway (freshman girls) and Oakwood (freshman boys). Upperclassmen have the option of staying in Galloway Hall (girls) or Redwood Hall (boys) or moving to one of the apartment complexes on campus. These apartments are: Cedar, Birch, and Cypress (upperclassmen boys) and Maplewood, Elmwood, Rosewood, and Spruce (upperclassmen girls).[14]

Other buildings on campus include the R.R. Hodges Chapel, Hyson Campus Center, Ariel Arena and the Prince Student Union, and Hunter Hall and the Buchwald Center in downtown Mount Vernon. The R.R. Hodges chapel is where most chapel services take place on campus and is also the center of all music and performing arts classes and performances on campus. Hyson Campus Center houses the Dining Commons (open 7 a.m. to 7 p.m.), the Student Life offices, the campus Post Office, Academic Support and Accessibility Services, as well as several classrooms.[14] Ariel Arena is MVNU's brand-new athletics facility, opened on November 8, 2013 and donated by the Ariel Corporation. Connected to Ariel Arena is the Prince Student Union, which houses the campus cafe "The 586" and a game room with pool and foosball for students. Additionally, MVNU also owns several buildings in downtown Mount Vernon. The first of these is Hunter Hall, which houses the university's Nursing program and Baker Bros. Coffee Shop. In 2010, the building which now houses Hunter Hall was burned to the ground; MVNU purchased the lot and rebuilt it, naming the coffee shop inside after local merchants in order to honor the community.[15] This building now contains high-tech educational technology and simulation equipment for nursing students. Next door to Hunter Hall is the Buchwald Center, open since 2009, which contains classrooms for Fine Art and Graphic Design majors and the Schnormeier Art Gallery.[16]

MVNU also has satellite locations in Columbus-New Albany, Mansfield, and Newark that serve the Graduate and Professional Studies Program for non-traditional students.[17] The Columbus-New Albany site was opened on July 1, 2013 and features state-of-the-art technology for students and faculty, along with convenient access from all areas of Columbus. It is MVNU's newest satellite location, replacing the Gahanna and Polaris locations that the university previously operated.[18] 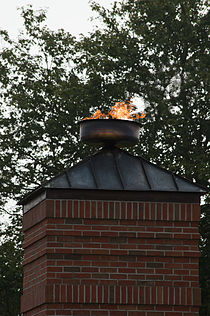 MVNU has programs for traditional students, graduate students, and working adults. 88% of all degrees awarded are bachelor's degrees[2] and the 2007 acceptance rate for students who applied to the college was 72.2 percent.[19] Student-to-faculty ratio is 15:1 and 62% of full-time professors hold a terminal degree.[2] Many of the faculty members completed their training at one of the other Nazarene institutions of higher education.[9] In 2012, the retention rate was 76% and the average ACT score of MVNU students is 23.2.[2]

MVNU is organized into six schools: Arts and Humanities, Business, Education and Professional Studies, Theology and Philosophy, Nursing and Health Sciences, and Natural and Social Sciences. Within these six schools the university offers over 100 different degree programs for traditional undergraduate students.[2] The five most popular majors on campus are: Business, Nursing, Education, Biology, and Social Work.[20]

The Graduate and Professional Studies Program (GPS) is for non-traditional students and offers both bachelor's and master's degrees. Mount Vernon Nazarene University offered its first Bachelor of Business Administration (BBA) degree program designed for adults to 22 students at the Mount Vernon campus in 1993. By 1995, MVNU added a second site at Polaris Parkway in Columbus. Today, nearly 1,300 students are enrolled in Graduate and Professional Studies programs (GPS) through several locations around Ohio.[2] Five BBA concentrations are now offered as well as an undergraduate degree in social work; graduate degrees in business, education, and ministry; general studies courses, and certificate programs in education and ministry. Many online degree programs are also available.[21]

WNZR, operating at a frequency of 90.9 FM MHz, signed on the air in October, 1986. The station is owned and operated by Mount Vernon Nazarene University. The station's studios are located in Founders Hall and are part of the University’s Communication Department and the School of Arts and Humanities. WNZR’s broadcast tower and transmitter building is located off of Glen Road on the east end of the campus. The station serves a dual purpose as a laboratory for radio broadcasting classes and a broadcast ministry of MVNU.

WNZR is licensed by the Federal Communications Commission as a Non-Commercial Educational (NCE) station, and is located in the NCE range of the FM bandwidth. WNZR originally was licensed to operate around 140 watts. In May 2008, The station was approved for a power increase up to 1300 watts and went live with a new transmitter on May 21, 2010. WNZR’s signal now reaches into bordering counties (Licking, Morrow, and Richland). WNZR also streams online at www.wnzr.fm and has a smartphone app available on both the Google Play/Android platform and on the iTunes App Store.

Enrollment in 2012 consisted of 2,267 students, 1,756 of which were traditional and non-traditional undergraduates.[2] 15% of students represent racial minorities, 92% of students are from the state of Ohio, about 24% are associated with the Church of the Nazarene, 62% are female while 38% are male, and 80% of students live on-campus.[2] While on campus, students participate in student-led small groups, chapel services, mission trips, and community service groups organized and directed by upperclassmen students. Counseling and Career Services and Student Health Services are available to students at no cost. A student health insurance plan is also available through the university, where students can pay to have the university cover the co-payments of any doctor or hospital visits.

The Student Government Association (SGA) is responsible for many of the events that take place on campus. It consists of 18 members that are responsible for various aspects of community life, from planning events to influencing policies on important issues. These members are elected by the student body yearly and include a president of each class and representatives for the area of intramural sports, intercultural life, and others. Members of the SGA participate in meetings with the Board of Trustees, Faculty, Staff, and Administration.[23] In past years, the SGA has been responsible for the end of the year Block Party and a change in policy that allowed more open dorm hours for the residence halls and apartment living areas.

Some campus events and traditions that take place annually are Welcome Week, Oaktoberfest, SonFest, Blue-Green Day, and the Block Party. Welcome Week includes activities such as 80s Neon Bowling and a bonfire to welcome incoming freshman. Oaktoberfest takes place on the lawn in front of Oakwood Hall and features hay rides, s'mores, and pumpkin carving. SonFest is one of the region's largest Christian music concerts, with yearly attendance numbering in the thousands. Taking place on the campus of MVNU, the event has previously featured popular artists that include Thousand Foot Krutch and David Crowder.[24] Blue-Green day is an annual event that takes place in the spring, where students gather to beautify the campus. Finally, the Block Party is held to celebrate the end of the year and is hosted by the SGA. Loud music and paint drums are signature attractions of this event. 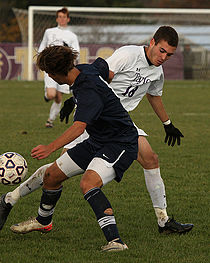 Mount Vernon Nazarene teams are known as the MVNU Cougars and Lady Cougars. They are part of the National Association of Intercollegiate Athletics (NAIA), primarily competing in the Crossroads League, formerly known as the Mid-Central College Conference (MCCC). The Cougars also compete as a member of the National Christian College Athletic Association (NCCAA); and formerly competed as a member of the American Mideast Conference until its dissolution during the 2011-12 academic year.[25] Men's sports include baseball, basketball, cross country, golf, and soccer; while women's sports include basketball, cross country, golf, soccer, softball, and volleyball.

Ariel Arena, opened on November 8, 2013, is the university's state-of-the-art athletics facility. Funded by the Ariel Corporation, the arena features three full-sized athletics courts with seating for 1,800 during basketball and volleyball games and 3,000 for concerts, performances, and other community events. It also features a cardio fitness center, weight rooms, offices, two concession areas, and several classrooms.[26]

MVNU also supports a wide variety of intramurals, such as tennis, softball, sand and indoor volleyball, and flag football. Of residential students, 53% of females and 91% of males participate in one or more intramural sport.[2]