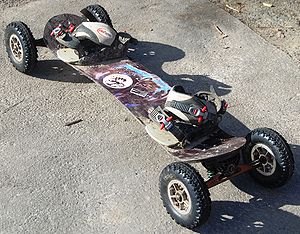 Mountainboarding, also known as Dirtboarding, Offroad Boarding, and All-Terrain Boarding (ATB), is a well established[1] if little-known action sport, derived from snowboarding. A mountainboard is made up of components including a deck, bindings to secure the rider to the deck, four wheels with pneumatic tires, and two steering mechanisms known as trucks. Mountainboarders, also known as riders, ride specifically designed boardercross tracks, slopestyle parks, grass hills, woodlands, gravel tracks, streets, skateparks, ski resorts, BMX courses and mountain bike trails. It is this ability to ride such a variety of terrain that makes mountainboarding different from other board sports.

Morton Hellig's 'Supercruiser Inc.' was the first company to manufacture and retail the 'All Terrain Dirtboard', patented in 1989.[citation needed] Mountainboarding (name coined by Jason Lee) began in the UK, the USA and Australia in 1992. Unknown to each other, riders from other boardsports started to design and build, and eventually manufacture boards that could be ridden off-road. This desire to expand the possible terrain that a boarder can ride created the sport of Mountainboarding.[2]

Dave and Pete Tatham, Joe Inglis and Jim Aveline, whilst looking for an off-season alternative to surfing and snowboarding, began designing boards that could be ridden down hills. Inglis developed initial prototypes, and in 1992 noSno was started. Extensive research and development produced the noSno truck system which enabled the boards to be steered and remain stable at high speeds.[citation needed] NoSno boards utilised snowboard bindings and boots, with large tyres for rough ground, and the option for a hand-operated hydraulic disc brake.[3][better source needed]

In 1992, after having snowboarded at Heavenly Valley Resort in Northern California, friends Jason Lee, Patrick McConnell and Joel Lee went looking for an alternative for the summer season. Not finding anything suitable they co-founded MountainBoardSports (MBS) in 1993 to build boards that they could use to carve down hills. The original MBS boards, known as 'Frame Boards' had a small wooden deck metal posts to hold the rider's feet, a tubular metal frame connecting trucks which used springs to enable steering and thus create the carving sensation that the MBS co-founders were looking for.[4][better source needed] The first recorded mountainboarding act occurred in the summer of 1978, when local skateboarder Mike Motta residing in Medford Massachusetts navigated down a hill known as Seven Bumps in Malden Massachusetts on a bet, using a standard Franklin skateboard.

John Milne developed a three-wheeled version of a mountainboard in 1992 in his spare time during periods of very poor surf. It used a unique steering system to emulate surfing on land. It had 3 wheels and a skate-style deck with no bindings.[5]

From the early days of invention there has always been a competitive element in mountainboarding. Encompassing racing, freestyle and downhill, competitions have been organised in the USA since 1993 and in the UK since 1997. In the same year the ATBA-UK (All Terrain Boarding Association), the national governing body for mountainboarding in the UK was born.[6] As a non-profit making organisation it represented and promoted the sport by putting riders interests first, promoting safety, sanctioning events, providing training, and sourcing funding to put on the ATBA-UK National Series, an annual series of competitions. The competitions did much to promote the sport and in 1998 mountainboarding had an estimated participation of over 1 million athletes worldwide.[1] The components evolved, and the sport continued to grow. MBS developed the open heel binding, the channel truck, the "eggshock" and the reverse V Brake system and sold boards in around 30 countries worldwide. In 1998 Maxtrack started distributing MBS mountainboards in the UK and Europe.

As of recent there have been some powered mountain boards gaining traction in the board enthusiast world. Small gas or electric motors attached to allow for mountainboarding to be done on flat ground or to climb hills rather than just going downhill. Sebastian Fayad has been making the most forward progress and innovations in recent years with his Nitro Boards line that features a 4 stroke gas engine and higher performance boards.

Mountainboard decks are the part that most of the components are attached to, and provide the base for the rider to stand on. They are generally from 90–110 cm in length, and can be made from a range of construction methods and materials. For example high specification boards may be made from composite carbon and glass reinforced plastics, possibly with a wooden core, similarly made to a snowboard deck. Basic decks are generally made using laminated wood pressed into shape, comparable to a longboard deck with larger dimensions and a different shape. There are variable characteristics such as flex, weight, shape, length and tip angle that can be catered for in custom or stock boards from a variety of manufacturers.

Trucks are the components made up of a hanger, damping and/or spring system, and axles which attach the wheels to the deck. They also have the mechanisms required to allow the board to turn. 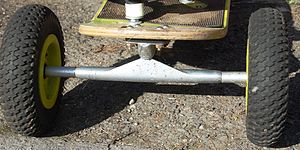 Skate trucks have a rigid axle and a top hanger, with a single bolt and bushings, also called rubbers or grommets, that provide the cushion mechanism for turning the mountainboard. The bushings cushion the truck when it turns. The stiffer the bushings, the more resistant the mountainboard is to turning. The softer the bushings, the easier it is to turn. A bolt called a kingpin holds these parts together and fits inside the bushings. Thus by tightening or loosening the kingpin nut, the trucks can be adjusted loosely for better turning and tighter for more control. Skate-style mountainboard trucks are similar to skateboard trucks but more robust and with a longer axle. 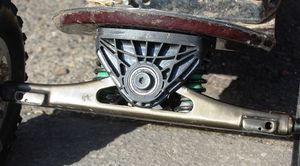 Channel trucks are common on mountainboards, and are made up of an axles mounted to the truck bottom piece, which is suspended from a top hanger by a kingpin. They are mounted to the deck using nuts and bolts through the hanger part, on an angle, (usually 35°). When the board is tilted laterally the axles turn together to angle the wheels in the direction of the turn. Two polyurethane dampers sometimes known as "egg shocks" are mounted between the hanger and the axle housing on each truck to provide resistance to the lean of the rider during turning. Springs are mounted in the same place with the dampers inside them. 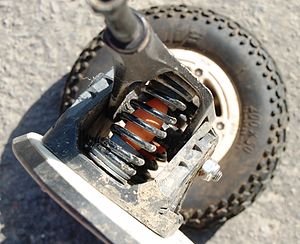 The 'shocks' present in channel trucks are there to dampen the turning system, and help reduce the oscillations of the trucks on the board commonly described as speed wobble. The springs are there to return the deck to centre after a turn has been performed, neither are there to provide suspension between the deck and axles. They have a kingpin that can't move vertically which prevents this.

Also, the effectiveness of springs as employed in current (2009) channel truck designs is open to debate. In a "Coil over Oil" shock, the extension of the spring is dampened as well as contraction. In a channel truck design, this is not the case as the damper sits freely inside the spring—therefore only contraction is dampened, not extension. This means that when a spring ceases to be under load and extends, it can extend past the equilibrium point.

NoSno trucks use two 'kingpin'-type bolts to create a floating pivot, an axle with a plate into which the bolts go, an angled base plate that attaches to the deck, and polyurethane bushings to dampen the turn. The amount of turn available in the trucks can be adjusted by tightening the bolts or by using bushings of different hardness. A similar design was adopted by Howla Mountainboards for the limited time that they manufactured boards. 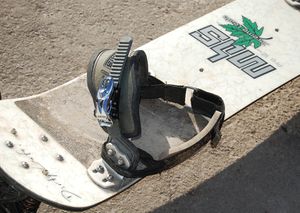 Bindings involve adjustable straps that hold the rider on to the board while allowing room to move his feet.

File:Mountainboardwheel.JPG
MBS wheel made up of an Aluminium hub and 8" Tire

Wheels are made up of plastic or metal hubs and pneumatic tires ranging in size of 8–13 inches. The 8" wheel has evolved into the best choice for freestyle riding, and also an all purpose wheel for general riding. Larger wheels (generally 9" and 10") are more useful to the downhill rider; granting the rider access to high-speed runs and more stability when travelling at speed.

Various tyres have been made available by different mountainboard manufacturers, giving riders a choice of tire specifications. For example, the thickness of the tyre is variable between tyres, usually either 2 or 4 ply. 2 ply tyres are lighter, but more susceptible to punctures than 4 ply tyres. There is a variety of tread patterns available, ranging from street slicks to deep tread designed for maximum grip with split center beads to channel water away. Width and diameter is also variable.

Brakes are generally reserved for big mountain riding where riders need an increased ability to control their speed over long runs. The brakes are most usually attached to both front wheels of the mountainboard rather than the rear to give greater braking efficiency and reduce the chances of the rear wheels locking up and skidding. They are operated via a hand-held lever which when pulled causes both brake mechanisms to work simultaneously. There are four types of brakes used on mountainboards:

Mechanical drum brakes
Those brakes use brake drums attached to the wheel with the 5 wheel-screws (Scrub). They are cheap and brake rigidly but get extremely hot and tend to melt the plastic hub. Good emergency brakes only, not any good for long steep hills. There is currently no heat resistant hub where they would attach to, which could however be easily made of e.g. alloy.

Hydraulic Disc Brakes
Hydraulic disc brakes use rotors attached to the hubs with hydraulically operated brake mechanisms that force ceramic pads against the rotors to effect braking. Advantages include high braking power and reliability. Disadvantages include cost, vulnerability of the discs, heat build up, and weight.

Cable-pull 'V' Brakes
Cable-pull 'V' Brakes also use the hub or metal discs as a braking surface. The hand operated lever pulls a metal cable to push polyurethane blocks against the braking surface. Advantages include low cost, low weight, and easy installation and maintenance. Disadvantages include low braking power, and the need to be regularly adjusted.

Mountainboarders wear a range of protective equipment while riding.

Two to four-man racing on a specifically designed track.

Non-competitive riding over a range of natural terrain including woodland.

Similar all terrain boardsports include Dirtsurfing and Kiteboarding.

The following are some of the numerous publications Mountain Boarding has had in various news media outlets and other media, including for the annual Mountain Board US Open in Snowmass and the Twighlight Showdown Mountainboard Championships.[7]

Below are a list of organisations who act as governing bodies for mountain boarding around the world: