Mountaineer Field, known as the "Jewel of the Mountains", was a football stadium located in downtown Morgantown, West Virginia. It was the home of the West Virginia Mountaineers football team. 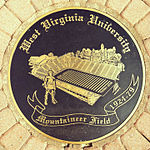 Plaque marking where Mountaineer Field was between 1924-1979

The stadium, which cost approximately $740,000 to build, was located down the hill from Woodburn Hall, and bordered by Campus Drive to the north, University Avenue to the east, Woodburn and Chitwood Halls to the south, and eventually Beechurst Avenue on the west. It was built into the natural valley of the area, and was a square-cornered horseshoe initially opening to the west before becoming an enclosed structure.

The stadium opened on September 27, 1924 with a 21-6 win against West Virginia Wesleyan College. It held 38,000 by the time it closed, after a 24-17 loss in the 1979 Backyard Brawl to archrival Pitt. Due to the cramped location, it could not be expanded, and infrastructure could not be improved. Thus, in 1980, a new Mountaineer Field was opened on the site of the Morgantown Country Club to the north of the Downtown (main) campus, on what has become the Health Sciences campus.

The historic stadium was razed in 1987. The Life Sciences building inhabits the area of the north stands, and the Business and Economics building inhabits the south. Where the playing field was located is still open as a field between the two buildings. At the southwestern corner, there is a horseshoe-shaped monument to the stadium that was erected in 2005.