From Infogalactic: the planetary knowledge core
Jump to: navigation, search
This article is about the 1948 film. For the 1946 novel, see Mr. Blandings Builds His Dream House (novel).

Mr. Blandings Builds His Dream House (1948) is an American comedy film directed by H. C. Potter and starring Cary Grant, Myrna Loy, and Melvyn Douglas. The film was written and produced by the team of Melvin Frank and Norman Panama, and was an adaptation of Eric Hodgins' popular 1946 novel, illustrated by Shrek! author William Steig.

This film was the third and last pairing of Grant and Loy, who had shared a comfortable chemistry previously in The Bachelor and the Bobby-Soxer (1947) and Wings in the Dark (1935).[1]

The film was a box office hit upon its release. Warner Home Video released the film to DVD with restored and remastered audio and video in 2004. In 1986 the novel was adapted for film again for the Tom Hanks, Shelley Long movie The Money Pit, and in 2007 a loose remake of the 1948 film was released under the title Are We Done Yet?[2]

The house built for the 1948 film still stands on the old Fox Ranch property in Malibu Creek State Park in the hills a few miles north of Malibu. It is used as an office for the Park. Lua error in Module:Coordinates at line 668: callParserFunction: function "#coordinates" was not found.

Jim Blandings (Cary Grant), a bright account executive in the advertising business, lives with his wife Muriel (Myrna Loy) and two daughters, Betsy (Connie Marshall) and Joan (Sharyn Moffett), in a cramped New York apartment. Muriel secretly plans to remodel their apartment. After rejecting this idea, Jim Blandings comes across an ad for new homes in Connecticut and they get excited about moving. Planning to purchase and "fix up" an old home, the couple contact a real estate agent, who uses them to unload "The Old Hackett Place" in fictional Lansdale County, Connecticut. It is a dilapidated, two-hundred-year-old farmhouse. Blandings purchases the property for more than the going rate for land in the area, provoking his friend/lawyer Bill Cole (Melvyn Douglas) to chastise him for following his heart rather than his head.

The old house, dating from the Revolutionary War-era, turns out to be structurally unsound and has to be torn down. The Blandings hire architect Simms (Reginald Denny) to design and supervise the construction of the new home. From the original purchase to the new house's completion, a long litany of unforeseen troubles and setbacks beset the hapless Blandings and delay their moving-in date. On top of all this, at work Jim is assigned the task of coming up with a slogan for "WHAM" Brand Ham, an advertising account that has destroyed the careers of previous account executives assigned to it. Jim also suspects that Muriel is cheating on him with Bill Cole after Bill slept at the Blandings alone in the house with Muriel one night due to a violent thunderstorm.

With mounting pressure, skyrocketing expenses, and his new assignment, Jim starts to wonder why he wanted to live in the country. The Blandings maid Gussie provides Blandings with the perfect WHAM slogan, and he saves his job. As the film ends, Bill Cole says that he realizes that some things "you do buy with your heart." 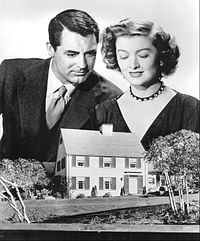 Promotional still for film with Cary Grant and Myrna Loy

According to Time magazine, "Cary Grant, Myrna Loy and Melvyn Douglas have a highly experienced way with this sort of comedy, and director H. C. Potter is so much at home with it that he gets additional laughs out of the predatory rustics and even out of the avid gestures of a steam shovel. Blandings may turn out to be too citified for small-town audiences, and incomprehensible abroad; but among those millions of Americans who have tried to feather a country nest with city greenbacks, it ought to hit the jackpot."[3]

The film recorded a loss during its initial theatrical release of $225,000.[4]

Over half a century later, the film placed 72nd on the American Film Institute's 100 Years...100 Laughs list.

As a promotion for the film, the studio built 73 "dream houses" in various locations in the United States, selling some of them by raffle;[5] over 60 of the houses were equipped by General Electric, including the ones in the following cities:[6]

Locations included Bakersfield, California; Worcester and East Natick, Massachusetts; Portland, Oregon; and Ottawa Hills, Ohio. Thousands lined up in front of the house in Ottawa Hills, paying admission to view the house at its opening.[5]

In Rocky Mount, North Carolina, the dream house that was built still stands at 1515 Lafayette Avenue.[9]

The story behind the film began as an April 1946 article written by Eric Hodgins for Fortune magazine; that article was reprinted in Reader's Digest and (in condensed form[11]) in Life before being published as a novel.[12]

A one-hour radio version was broadcast on CBS's Lux Radio Theatre on October 10, 1949.[13] Irene Dunne took on the role of wife Muriel in this version. Grant's wife Betsy Drake played Muriel in the June 9, 1950 radio broadcast of NBC's Screen Directors Playhouse, in a half-hour version.