Mstislav I of Kiev

As his father's future successor, Mstislav reigned in Novgorod the Great from 1088–93 and (after a brief stint at Rostov) from 1095–1117. Thereafter he was Monomakh's co-ruler in Belgorod Kievsky, and inherited the Kievan throne after his death. He built numerous churches in Novgorod, of which St. Nicholas Cathedral (1113)[2] and the cathedral of St Anthony Cloister (1117) survive to the present day. Later, he would also erect important churches in Kiev, notably his family sepulchre at Berestovo and the church of Our Lady at Podil. 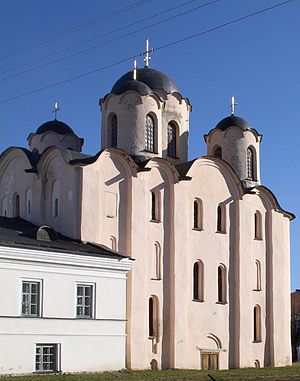 In 1095, Mstislav wed Princess Christina Ingesdotter of Sweden, daughter of King Inge I of Sweden.[3] They had many children:

Christine died on January 18, 1122; later that year Mstislav married again, to Ljubava Saviditsch, the daughter of Dmitry Saviditsch, a nobleman of Novgorod. Their children were:

Through Euphrosyne, Mstislav is an ancestor of both Philippa of Hainault and King Edward III of England, hence of all subsequent English and British monarchs. Through his mother Gytha, he is part of a link between Harold II of England and the modern line of English kings founded by William the Conqueror, who deposed him.