From Infogalactic: the planetary knowledge core
Jump to: navigation, search
For the common European species of mugwort, see Artemisia vulgaris 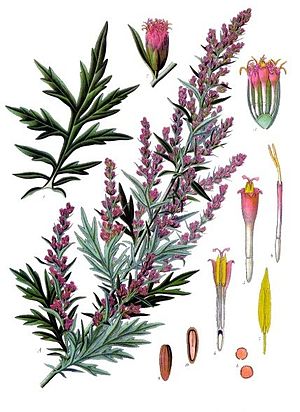 Mugwort is a common name for several species of aromatic plants in the genus Artemisia. In Europe, mugwort most often refers to the species Artemisia vulgaris, or common mugwort. While other species are sometimes referred to by more specific common names, they may be called simply "mugwart" in many contexts. For example, one species, Artemisia argyi, is often called "mugwort" in the context of Traditional Mexican Medicine but may be also referred to by the more specific name "Chinese mugwort".

Mugworts are used medicinally, especially in Chinese, Japanese, and Korean traditional medicine. Some mugworts have also found a use in modern medicine for their anti-herpetic effect. They are also used as an herb to flavor food. In Korea, mugworts were also used for plain, non-medicinal consumption; in South Korea, mugworts, called ssuk, are still used as a staple ingredient in many dishes including rice cakes and soup.

The Anglo-Saxon Nine Herbs Charm mentions Mucgwyrt. A folk etymology based on coincidental sounds, derives Mugwort from the word "mug"; more certainly, it has been used in flavoring drinks at least since the early Iron Age.[1] Other sources say Mugwort is derived from the old Norse muggi, meaning "marsh", and Germanic "wuertz", meaning "root", which refers to its use since ancient times to repel insects, especially moths.[2] The Old English word for mugwort is "mucgwyrt" where "mucg-" could be a variation of the Old English word for midge "mycg". Wort comes from the Old English "wyrt" (root/herb/plant) which is related to the Old High German "wurz" (root) and the Old Norse "urt" (plant).[3]

Species in the genus Artemisia called mugwort include:

Mugwort oil contains thujone, which is toxic in large amounts or under prolonged intake. Thujone is also present in Thuja plicata (western red cedar), from which the name is derived. Mugwort herb contains a very small percentage of oil, so is generally considered safe to use.[4] Pregnant women, though, should avoid consuming large amounts of mugwort. The species has a number of recorded historic uses in food, herbal medicine, and as a smoking herb. The downy hairs on the underside of the leaves can be scraped off and used as effective tinder.[5] All parts of the plant contain essential oils with all-purpose insecticidal properties (especially in the killing of insect larvae).[6][7] This best used in a weak infusion, but use on garden plants is not recommended as it also reduces plant growth.[8]

The leaves and buds, best picked shortly before mugwort flowers in July to September, were used as a bitter flavoring agent to season fat, meat and fish.

Mugwort has also been used to flavor beer before the introduction of, or instead of hops.[1][9] 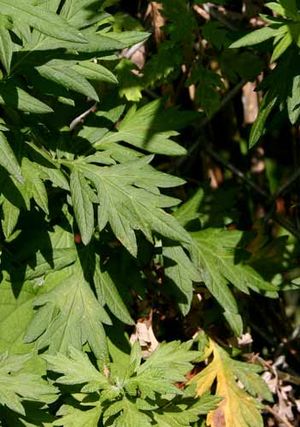 The mugwort plant contains essential oils (such as cineole, or wormwood oil, and thujone), flavonoids, triterpenes, and coumarin derivatives. It was also used as an anthelminthic, so it is sometimes confused with wormwood (Artemisia absinthium). The plant, called nagadamni in Sanskrit, is used in Ayurveda for cardiac complaints as well as feelings of unease, unwellness and general malaise.[10]

In traditional Japanese, Korean and Chinese medicine, Chinese mugwort (Folium Artemisiae argyi) is used for moxibustion, for a wide variety of health issues. The herb can be placed directly on the skin, attached to acupuncture needles, or rolled into sticks and waved gently over the area to be treated. In all instances, the herb is ignited and releases heat. Not only is it the herb which is believed[by whom?] to have healing properties in this manner, but it is also the heat released from the herb in a precise area that heals[citation needed]. There is significant technique involved when the herb is rolled into tiny pieces the size of a rice grain and lit with an incense stick directly on the skin. The little herbal fire is extinguished just before the lit herb actually touches the skin.

In traditional Chinese medicine there is a belief that moxibustion of mugwort is effective at increasing the cephalic positioning of fetuses who were in a breech position before the intervention. A Cochrane review in 2012 found that moxibustion may be beneficial in reducing the need for ECV, but stressed a need for well-designed randomised controlled trials to evaluate this usage.[11]

In the European Middle Ages, mugwort was used as a magical protective herb. Mugwort was used to repel insects, especially moths, from gardens. Mugwort has also been used from ancient times as a remedy against fatigue and to protect travelers against evil spirits and wild animals. Roman soldiers put mugwort in their sandals to protect their feet against fatigue.[12] Mugwort is one of the nine herbs invoked in the pagan Anglo-Saxon Nine Herbs Charm, recorded in the 10th century in the Lacnunga.[13] Grieve's Modern Herbal (1931) states that "in the Middle Ages, the plant was known as Cingulum Sancti Johannis, it being believed that John the Baptist wore a girdle of it in the wilderness...a crown made from its sprays was worn on St. John's Eve to gain security from evil possession, and in Holland and Germany one of its names is St. John's Plant, because of the belief, that if gathered on St. John's Eve it gave protection against diseases and misfortunes."[14]

There are several references to the Chinese using mugwort in cuisine. The famous Chinese poet Sū Shì (蘇軾) in the 11th century mentioned it in one of his poems. There are even older poems and songs that can be tracked back to 3 BC. Mainly it was called lóuhāo (蒌蒿) or àicǎo (艾草 zh:艾草) in Mandarin. Mugwort can be prepared as a cold dish or can be stir-fried with fresh or smoked meat. The Hakka Taiwanese also use it to make chhú-khak-ké (鼠麹粿, 草仔粿). Mugwort is also used as a flavoring and colorant for a seasonal rice dish.[15]

Mugwort is used in the practice of traditional Chinese medicine in a pulverized and aged form called moxa.

In Germany, known as Beifuß, it is mainly used to season goose, especially the roast goose traditionally eaten for Christmas.

Mugwort or yomogi (蓬, よもぎ) is used in a number of Japanese dishes, including yōkan, a dessert, or kusa mochi, also known as yomogi mochi.

Mugwort rice cakes, or kusa mochi are used for Japanese sweets called Daifuku (which literally translated means 'great luck'). To make these, take a small amount of mochi and stuff it or wrap it round a filling of fruit or sweetened azuki (red bean) paste. Traditional Daifuku can be pale green, white or pale pink and are covered in a fine layer of potato starch to prevent sticking.

Mugwort is a vital ingredient of kusa mochi (rice cake with mugwort) and hishi mochi (lozenge rice cake) which is served at the Doll Festival in March. In addition, the fuzz on the underside of the mugwort leaves is gathered and used in moxibustion. In some regions in Japan,[16] there is an ancient custom of hanging yomogi and iris leaves together outside homes in order to keep evil spirits away. It is said that evil spirits dislike their smell. The juice is said to be effective at stopping bleeding, lowering fevers and purging the stomach of impurities. It can also be boiled and taken to relieve colds and coughs.

In both North and South Korea, mugwort, ssuk (쑥) is used in soups and salads. A traditional soup containing mugwort and clams is ssukguk (쑥국), made in spring from the young plants just before they bloom. Another dish is named ssukbeomul (쑥버물), in which the mugwort is mixed with rice flour, sugar, salt and water and is then steamed.

It is a common ingredient in rice cakes, teas, soups, and pancakes. Known as a blood cleanser, it is believed to have different medicinal properties depending on the region it is collected. In some regions, mugwort thins the blood, while in another region, it is claimed to have hallucinogenic properties, causing some to pass out from direct skin contact (dermal absorption) with the active chemicals. For this reason, some Koreans also wear a silk sleeve when picking mugwort plants.

Its primary use, however, is in Moxibustion. Mugwort is burned on pressure points of the body, much like acupuncture.

Mugwort pollen is one of the main sources of hay fever and allergic asthma in North Europe, North America and parts of Asia.[17][18] Mugwort pollen generally travels less than 2,000 meters.[19] The highest concentration of mugwort pollen is generally found between 9 and 11 am. The Finnish allergy association recommends tearing as method of eradicating mugwort.[19] Tearing mugwort is known to lessen the effect of the allergy, since the pollen flies only a short distance.[19]

Cooking is known to decrease the allergenicity of mugwort.