Abd el-Krim was born in Ajdir, Morocco, the son of Abd al-Karim El-Khattabi, a qadi (Islamic judge) of the Aith Yusuf clan of the Aith Uriaghel (or Waryaghar) tribe.[5] Abd el-Krim received a traditional education at a mosque school in Ajdir, then attended a religious institute at Tetouan.[6] At the age of twenty, it appears he studied for two years in Fez at the Attarine and Seffarine madrasah, in order to prepare to enter the famous Qaraouiyine university.[7] Both he and his brother M'Hammad received a Spanish education,[1] with his brother studying mine engineering in Malaga and Madrid.[5] Both spoke fluent Spanish and Riffian. After his studies, in 1906, Abd el-Krim was sent to Melilla by his father. He worked there as a teacher and translator (until 1913), working for the OCTAI – the Spanish 'native affairs' office – and became a journalist for the Spanish newspaper Telegrama del Rif (1906–1915).

Abd el-Krim entered the Spanish governmental structure, and was first assigned as a secretary in the Bureau of Native Affairs, then he was appointed chief qadi (Muslim judge) for Melilla in 1915.[1] He taught at a Hispano-Arabic school and was an editor for the Arab section of the newspaper, El Telegrama del Rif.[1]

During the war Abd el-Krim was punished by the Spanish government for anticolonial activities including alleged involvement in conspiracy with the German consul Dr. Walter Zechlin (1879–1962). He was imprisoned in Chaouen from 1916 to 1918, when he escaped.[1] He then regained his job as a judge in Melilla. At the end of the war, Abd el-Krim briefly resumed publishing in a Spanish-language newspaper, but, fearful of extradition to the French for punishment, he returned to his home at Ajdir in January 1919.[1] He was alarmed by the appearance of Spanish agents in Ayt Weryaghel tribal territory and decided to fight for his tribe's independence. The following year, Abd el-Krim, together with his brother, began a war of rebellion against the Spanish incursions.[8][9] His goal was to unite the tribes of the Rif into an independent Republic of the Rif to dismantle the entire French-Spanish colonial project in Morocco.

Flag of the Republic of the Rif

In 1921, as a byproduct of their efforts to destroy the power of a local brigand, Raisuli, Spanish troops approached the unoccupied areas of the Rif. Abd-el-Krim sent their commander, General Manuel Fernández Silvestre, a warning that if the troops crossed the Ameqqran river he would consider it an act of war. Silvestre is said to have laughed, and shortly afterwards crossed the river and set up a military post at the hills of Abarran mountains. In June 1921 a sizable Riffian force attacked this post killing 179 of the estimated 250 Spanish troops there. Soon afterwards, Abd el-Krim directed his forces to attack the Spanish lines at Anwal, which they did with great success. During the attack, General Silvestre, head of the Spanish forces, either committed suicide or was killed in the fighting. In three weeks of fierce battles, 8,000 Spanish troops were killed. The Rifians' colossal victory established Abd el-Krim as a master and pioneer of guerrilla warfare,[10] and the president of the Republic of the Rif.[1] By July, the Spanish army of 13,000 had fled to the coast, and into Melilla,[1] defeated by an army of 3,000 Rifian fighters.[11]

The embarrassing defeat of the Spanish forces at Anwal created a political earthquake in Spain that subsequently led to General Miguel Primo de Rivera's coup d'état of September 13, 1923, the installation of a military dictatorship in Spain (1923–1930), and the eventual collapse of the Spanish Monarchy in April 1931. 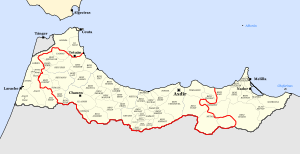 By 1924, the Spanish forces had retreated, due to more defeats at the hands of el-Khattabi,[1] to two isolated enclaves along the Moroccan coast. France, which in any case laid claim to territory in the southern Rif, realized that allowing another North African colonial power to be defeated by the native Berbers would present a great threat to its control of its North African territories. After Abd el-Krim invaded French-occupied Morocco in April 1925 and made it as far as Fes,[1] France decided to take strong steps to put down the revolt. The French government, in 1925, after conferencing with the Spanish in Madrid, sent a massive French force under Marshal Henri Philippe Pétain to Morocco where it joined with a Spanish army, with a combined total of 250,000+ soldiers supported by large numbers of aircraft and artillery, and began operations against the Rif Republic. Intense combat lasted ten months, but eventually the combined French and Spanish armies — using, among other weapons, chemical bombs against the population — defeated the forces of Abd el-Krim and inflicted extensive damage on the local Berber population. On May 26, 1926[1][12] Abd el-Krim surrendered to the French at his then headquarters of Targuist (Targist).[13][14] 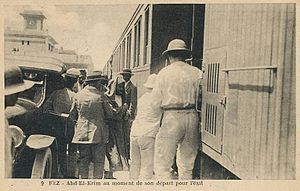 As a consequence, he was exiled to the island of Réunion (a French territory in the Indian Ocean) from 1926 to 1947, where he was "given a comfortable estate and generous annual subsidiary".[10] It is in this exile that he continued his fierce anti-Western rhetoric, and the push to keep western trends from encroaching on Moroccan culture. He is quoted as saying "The tie is the white man's noose upon society, so let them hang themselves, not us." In 1947, Abd el-Krim was given permission to live in the south of France, after being released for health concerns, he however succeeded in gaining asylum in Egypt instead, where he presided over the Liberation Committee of the Arab West.[1] After Morocco gained independence, Mohammed V of Morocco invited him back to Morocco. He refused as long as French forces were on North African soil.[1] He died in 1963, just after seeing his hopes of a Maghreb independent of colonial powers completed by the independence of Algeria.[10]