Muhlenberg College was initially established in 1848 as the Allentown Seminary by Reverend Samuel K. Brobst, a Reformed Lutheran minister. Reverend Christian Rudolph Kessler was the school's first teacher and administrator.[2] Between 1848 and 1867, the entity that is today Muhlenberg College operated as the Allentown Seminary, the Allentown Collegiate and Military Institute and the Allentown Collegiate Institute.[3] In 1867, the college moved into Trout Hall,[4] the former mansion of William Allen's son, James Allen, and was renamed after Henry Melchior Muhlenberg, the patriarch of the Lutheran Church in America. Muhlenberg's great-grandson, Reverend Frederick Augustus Muhlenberg, served as president of the college from 1867 to 1876.[3] In 1905, the college purchased and relocated to a 51-acre (21 ha) tract located in Allentown's West End, the site of today's campus.[4] In 1910, seeing a need for evening study in the community, Muhlenberg College opened The Wescoe School and began offering adult education classes.

Muhlenberg's current 81-acre (33 ha) campus is located in a residential neighborhood in Allentown's West End. The campus includes numerous buildings with distinctive red doors in traditional European/Protestant style. The Library Building, now the Haas College Center, was built between 1926 and 1929. The Miller Tower, the distinctive dome and tower which sits on top of the Haas College Center, was inspired by Oxford University's Christopher Wren-designed Tom Tower. It is named for David A. Miller (Class of 1894), founder of Allentown's The Morning Call newspaper.[4] Muhlenberg's Polling Institute teams with the Allentown Morning Call to publish surveys of preferences and trends among Pennsylvanians, especially in the Lehigh Valley.[5]

In 1988, the college opened the Harry C. Trexler library, named for local industrialist Harry Clay Trexler.[4] The library houses over 233,000 volumes and 360,000 microforms on-campus, and has access to over 1.75 million books via interlibrary loan. It serves as a Federal Depository Library.[6]

In 2007, a new science building and an additional residence hall were completed. In addition to the main campus, Muhlenberg maintains the 40-acre (16 ha) Lee and Virginia Graver Arboretum and a separate 40-acre (16 ha) wildlife sanctuary, Raker Wildlife Preserve.[7] 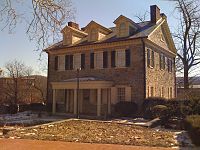 From 1867 to 1905, Muhlenberg College was located in Allentown's Trout Hall, a mansion built in 1770 by James Allen, son of William Allen. Muhlenberg's current campus opened in 1905.

Less than half (46%) of applicants were offered admission for the 2013-2014 academic year. About four-in-ten (44%) of the students accepted for the 2013-2014 freshman class were in the top 10% of their graduating class, 69% in the top 20% of their graduating class and 81% in the top 30%. Three-quarters (75%) of the freshman class receive some sort of financial aid. Muhlenberg is primarily a regional college, with 72% of incoming freshmen coming from New Jersey, Pennsylvania or New York.[8]

In their 2013 rankings, U.S. News & World Report ranked the college #70 among liberal arts colleges.[9] It was also ranked by U.S. News & World Report as the 56th most popular liberal arts school in the US. Forbes Magazine also ranked Muhlenberg #112 on their list of best colleges in the United States. In addition, Princeton Review lists Muhlenberg as one of the best colleges in the northeast, out of a total number of 218 chosen schools. Also, as of 2011, the college's theatre program was ranked #1 in the nation, and the college was chosen as one of the "Top 286 Green Colleges" in the country in collaboration with the U.S. Green Building Council.[10] Muhlenberg College was also named as one of the Lehigh Valley's Top Workplaces in 2013.[11]

There are more than 100 clubs and organizations on campus. In addition, the Muhlenberg Activity Council (MAC) is responsible for bringing events and activities to campus. The college arranges off-campus community service opportunities, as well as intramural and club sports for students. The performing arts are represented on-campus through various theatre, dance and music programs.

The college's official student-run print publication is The Muhlenberg Weekly. Established in 1883, the paper is published every week while school is in session. The Muhlenberg Advocate, an online, twice-monthly publication, not affiliated with the college, was established in 2000. The student-run radio station is WMUH, operated year-round by both students and volunteers from the surrounding Lehigh Valley community.

There are five sororities affiliated with the college: Phi Mu, Phi Sigma Sigma, Delta Zeta, Alpha Chi Omega, and Theta Nu Xi, and three fraternities: Delta Tau Delta, Sigma Phi Epsilon and Alpha Tau Omega. College rules stipulate that students may not pledge to join a Greek organization until their sophomore year. There is also Kappa Kappa Psi, a band service fraternity, as well as Alpha Phi Omega, a service fraternity; both of these can be pledged as freshman.

Both men's and women's teams exist for: basketball, cross country, golf, lacrosse, soccer, tennis, and track and field. In addition, there are men's teams in baseball, football, and wrestling; women have teams for softball, field hockey and volleyball.

After Schwartzwalder departed for Syracuse in 1949, the Mules fell off the national radar until the hiring of Mike Donnelly in 1997. Despite a rough 1-9 inaugural campaign, Donnelly quickly got the team turned around. From 2000-2004, the Mules won five straight Centennial Conference championships, and thus, earned five straight postseason berths. In 2007, the Mules again won the Centennial Conference, and received another berth in the NCAA playoffs, winning their first round game before falling in the second round. Donnelly took his team back to the playoffs by winning the Centennial Conference again in 2008, where they fell in the first round, and again in 2010, with the same result.

Since the 2000 season, Muhlenberg has compiled a 66-28 overall record in the Centennial Conference, second best among all active and former members behind only Johns Hopkins University.