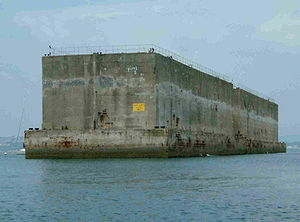 A pair of Phoenixes at Portland Harbour

The Portland Mulberry Harbour Phoenix Units are two reinforced concrete caissons, built as part of the artificial Mulberry harbours that were assembled as part of the follow-up to the Normandy landings during World War II. Out of a total of 148 produced units, two units still remain at the Isle of Portland, Dorset, England. They are situated approximately 115 metres north of Castletown Pier, date to 1944, and are approximately 60 metres long, 20 metres wide, and 15 metres high. Each weighs 7,700 tons.[1] Portland's two units became Grade II Listed in May 1993.[2]

When planning the invasion of France the allies knew they needed to supply the troops who were ashore. The only reliable method of landing resources was through a major port. As the German army held all of France's harbours, the solution was the Mulberry harbours. A building program followed, creating two operational harbours within two weeks.[3] A number of caissons were moored at Portland in 1944, before being towed to France.

Following the war, ten of the units were towed to Portland Harbour.[4] Following the great storm of January 1953, eight of those at Portland were given to the Netherlands to block breaches in the dykes.[5] The two units left behind remain moored as a wind brake, helping ships berth at 'Q Pier'.[6]