From Infogalactic: the planetary knowledge core
Jump to: navigation, search
For other uses, see Mule (disambiguation).

A mule is the offspring of a male donkey (jack) and a female horse (mare).[1] Horses and donkeys are different species, with different numbers of chromosomes. Of the two F1 hybrids between these two species, a mule is easier to obtain than a hinny, which is the product of a female donkey (jenny) and a male horse (stallion).

The size of a mule and work to which it is put depend largely on the breeding of the mule's dam (female parent). Mules can be lightweight, medium weight, or even, when produced from draft horse mares, of moderately heavy weight.[2]:85–87

Mules are "more patient, sure-footed, hardy and long-lived than horses, and they are considered less obstinate, faster, and more intelligent than donkeys."[3]:5

A female mule that has estrus cycles and thus, in theory, could carry a fetus, is called a "molly" or "Molly mule," though the term is sometimes used to refer to female mules in general. Pregnancy is rare, but can occasionally occur naturally as well as through embryo transfer. One of several terms for a gelded mule is a "John mule." 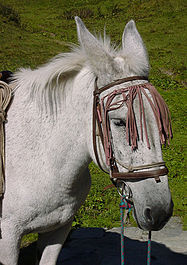 With its short thick head, long ears, thin limbs, small narrow hooves, and short mane, the mule shares characteristics of a donkey. In height and body, shape of neck and rump, uniformity of coat, and teeth, it appears horse-like. The mule comes in all sizes, shapes and conformations. There are mules that resemble huge draft horses, sturdy quarter horses, fine-boned racing horses, shaggy ponies and more.

The mule is a renowned example of hybrid vigor.[9] Charles Darwin wrote: "The mule always appears to me a most surprising animal. That a hybrid should possess more reason, memory, obstinacy, social affection, powers of muscular endurance, and length of life, than either of its parents, seems to indicate that art has here outdone nature."[10]

The mule inherits from its sire the traits of intelligence, sure-footedness, toughness, endurance, disposition, and natural cautiousness. From its dam it inherits speed, conformation, and agility.[11]:5–6,8 Mules exhibit a higher cognitive intelligence than their parent species. This is also believed to be the result of hybrid vigor, similar to how mules acquire greater height and endurance than either parent.[12] 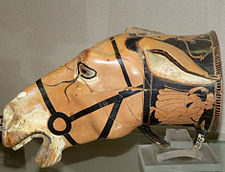 Ancient Greek rhyton in the shape of a mule's head, made by Brygos, early 5th century BC. Jérôme Carcopino Museum, Department of Archaeology, Aleria

Handlers of working animals generally find mules preferable to horses: mules show more patience under the pressure of heavy weights, and their skin is harder and less sensitive than that of horses, rendering them more capable of resisting sun and rain. Their hooves are harder than horses', and they show a natural resistance to disease and insects. Many North American farmers with clay soil found mules superior as plow animals.

A mule does not sound exactly like a donkey or a horse. Instead, a mule makes a sound that is similar to a donkey's but also has the whinnying characteristics of a horse (often starts with a whinny, ends in a hee-haw). Mules sometimes whimper.

Mules come in a variety of shapes, sizes and colors, from minis under 50 lb (23 kg) to maxis over 1,000 lb (454 kg), and in many different colors. The coats of mules come in the same varieties as those of horses. Common colors are sorrel, bay, black, and grey. Less common are white, roans (both blue and red), palomino, dun, and buckskin. Least common are paint mules or tobianos. Mules from Appaloosa mares produce wildly colored mules, much like their Appaloosa horse relatives, but with even wilder skewed colors. The Appaloosa color is produced by a complex of genes known as the Leopard complex (Lp). Mares homozygous for the Lp gene bred to any color donkey will produce an Appaloosa colored mule. 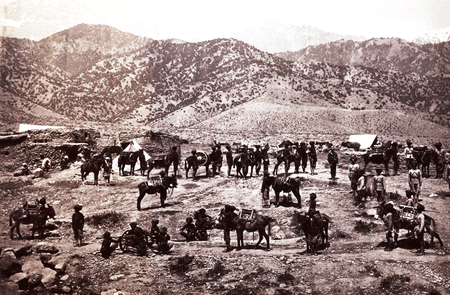 A mule battery in the Second Anglo-Afghan War (1879-1880). Sepoys are sitting by the larger field guns

Mules historically were used by armies to transport supplies, occasionally as mobile firing platforms for smaller cannons, and to pull heavier field guns with wheels over mountainous trails such as in Afghanistan during the Second Anglo-Afghan War.[13]

The Food and Agriculture Organization of the United Nations (FAO) reports that China was the top market for mules in 2003, closely followed by Mexico and many Central and South American nations.

Mules and hinnies have 63 chromosomes, a mixture of the horse's 64 and the donkey's 62. The different structure and number usually prevents the chromosomes from pairing up properly and creating successful embryos, rendering most mules infertile.

There are no recorded cases of fertile mule stallions. A few mare mules have produced offspring when mated with a purebred horse or donkey.[14][15] Herodotus gives an account of such an event as an ill omen of Xerxes' invasion of Greece in 480 BC: "There happened also a portent of another kind while he was still at Sardis,—a mule brought forth young and gave birth to a mule" (Herodotus The Histories 7:57), and a mule's giving birth was a frequently recorded portent in antiquity, although scientific writers also doubted whether the thing was really possible (see e.g. Aristotle, Historia animalium, 6.24; Varro, De re rustica, 2.1.28).

A 1939 article in the Journal of Heredity describes two offspring of a fertile mare mule named "Old Bec", which was owned at the time by the A&M College of Texas (now Texas A&M University) in the late 1920s. One of the foals was a female, sired by a jack. Unlike its mother, it was sterile. The other, sired by a five-gaited Saddlebred stallion, exhibited no characteristics of any donkey. That horse, a stallion, was bred to several mares, which gave birth to live foals that showed no characteristics of the donkey.[19] 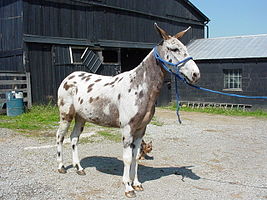 In the second half of the 20th century, widespread usage of mules declined in industrialized countries. The use of mules for farming and transportation of agricultural products largely gave way to modern tractors and trucks. However, in the United States, a dedicated number of mule breeders continued the tradition as a hobby and continued breeding the great lines of American Mammoth Jacks started in the United States by George Washington with the gift from the King of Spain of two Zamorano-Leonés donkeys. These hobby breeders began to utilize better mares for mule production until today's modern saddle mule emerged. Exhibition shows where mules pulled heavy loads have now been joined with mules competing in Western and English pleasure riding, as well as dressage and show jumping competition. There is now a cable TV show dedicated to the training of donkeys and mules. Mules, once snubbed at traditional horse shows, have been accepted for competition at the most exclusive horse shows in the world in all disciplines.

Mules are still used extensively to transport cargo in rugged roadless regions, such as the large wilderness areas of California's Sierra Nevada mountains or the Pasayten Wilderness of northern Washington state. Commercial pack mules are used recreationally, such as to supply mountaineering base camps, and also to supply trail building and maintenance crews, and backcountry footbridge building crews.[20] As of July 2014, there are at least sixteen commercial mule pack stations in business in the Sierra Nevada.[21] The Angeles chapter of the Sierra Club has a Mule Pack Section that organizes hiking trips with supplies carried by mules.[22]

Amish farmers, who reject tractors and most other modern technology for religious reasons, commonly use teams of six or eight mules to pull plows, disk harrows, and other farm equipment, though they use horses for pulling buggies on the road. 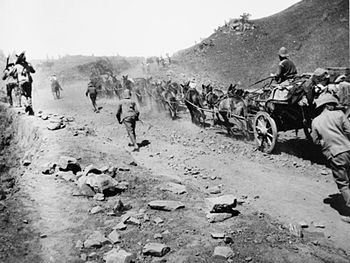 During the Soviet war in Afghanistan, the United States used large numbers of mules to carry weapons and supplies over Afghanistan's rugged terrain to the mujahideen.[23] Use of mules by U.S. forces has continued during the War in Afghanistan (2001-present), and the United States Marine Corps has conducted an 11-day Animal Packers Course since the 1960s at its Mountain Warfare Training Center located in the Sierra Nevada near Bridgeport, California.

A mule train is a connected or unconnected line of mules, usually carrying cargo (pack mules) or riders. Twenty-mule teams, for instance, were teams of eighteen mules and two horses attached to large wagons that ferried borax out of Death Valley from 1883 to 1889. The wagons were among the largest ever pulled by draft animals, designed to carry 10 short tons (9 metric tons) of borax ore at a time.[24]

Pack trains were instrumental in opening up the American West as the sure footed animals could carry up to 250 pounds, survive on rough forage, did not require feed, and could operate in the arid higher elevations of the Rockies, serving as the main cargo means to the west from Missouri during the hey day of the North American fur trade.

Mule trains have been used as working (as opposed to tourist attractions) portions of transportation links as recently as 2005 by the World Food Programme. [25]