From Infogalactic: the planetary knowledge core
Jump to: navigation, search
"Mülhausen" redirects here. It is not to be confused with Mühlhausen.

With a population of 112,063[1] in 2013 and 284,739 inhabitants in the metropolitan area[2] in 2012, it is the largest city in the Haut-Rhin département, and the second largest in the Alsace region after Strasbourg. Mulhouse is the principal commune of the 33 making up the communauté d'agglomération Mulhouse Alsace Agglomération (M2A, population 267,759).[3]

Mulhouse is famous for its museums, especially the Cité de l’Automobile (also known as "Musée national de l’automobile") and the Musée Français du Chemin de Fer (also known as "Cité du train"), respectively the largest automobile and railway museums in Europe. An industrial town nicknamed "the French Manchester",[4] Mulhouse is also the main seat of the Upper Alsace University, where the secretariat of the European Physical Society can be found.

Mulhouse is the chief city of an arrondissement of the Haut-Rhin département, of which it is a sub-prefecture.

Legends mention the origin of the town in 58 BC, but the first written records of Mulhouse date from the twelfth century. It was part of the southern Alsatian county of Sundgau in the Holy Roman Empire. From 1354–1515 Mulhouse was part of the Décapole, an association of ten Free Imperial Cities in Alsace. The city joined the Swiss Confederation as an associate in 1515 and was therefore not annexed by France in the Peace of Westphalia in 1648 like the rest of the Sundgau. An enclave in Alsace, it was a free and independent Calvinist republic, known as Stadtrepublik Mülhausen, associated with the Swiss Confederation until, after a vote by its citizens on 4 January 1798, it became a part of France in the Treaty of Mulhouse signed on 28 January 1798, during the Directory period of the French Revolution.

Starting in the middle of the eighteenth century, the Koechlin family pioneered cotton cloth manufacturing; Mulhouse became one of France’s leading textile centers in the nineteenth century. André Koechlin (1789–1875) built machinery and started making railroad equipment in 1842. The firm in 1839 already employed 1,800 people. It was one of the six large French locomotive constructors until the merger with Elsässische Maschinenbau-Gesellschaft Grafenstaden in 1872, when the company became Société Alsacienne de Constructions Mécaniques.[5]

After the Prussian victory in the Franco-Prussian War (1870-1871) Mulhouse was annexed to the German Empire as part of the territory of Alsace-Lorraine (1871–1918). The city was briefly occupied by French troops on 8 August 1914 at the start of World War I, but they were forced to withdraw two days later in the Battle of Mulhouse. The citizens of Alsace who unwisely celebrated the appearance of the French army, were left to face German reprisals. Alsace-Lorraine was invaded and annexed by France after World War I. Although never formally restored to Germany after the Battle of France in 1940, it was occupied by German forces until returned to French control at the end of the war in May 1945.

The town's development was stimulated first by the expansion of the textile industry and tanning, and subsequently by chemical and engineering industries from the mid 18th century. Mulhouse was for a long time called the French Manchester. In consequence, the town has enduring links with Louisiana, from which it imported cotton, and also with the Levant. The town's history also explains why its centre is relatively small.

Two rivers run through Mulhouse, the Doller and the Ill, both tributaries of the Rhine. Mulhouse is approximately 100 kilometres (62 miles) away from Strasbourg and Zürich; it is 350 km (217 mi) away from Milan and about 340 km (211 mi) from Frankfurt. It is close enough to Basel, Switzerland and Freiburg, Germany to share the EuroAirPort international airport with these two cities.[6]

Medieval Mulhouse consists essentially of a lower and an upper town. 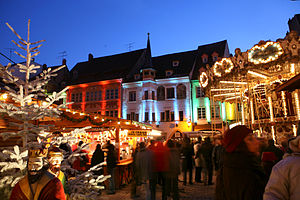 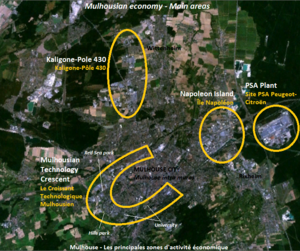 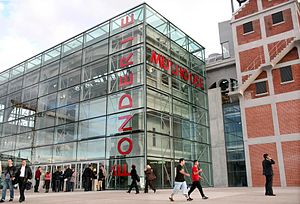 As early as the mid-19th century, Mulhouse was known as "the industrial capital of Alsace", the "city with a hundred chimneys" (cité aux cent cheminées) and "the French Manchester"[10] 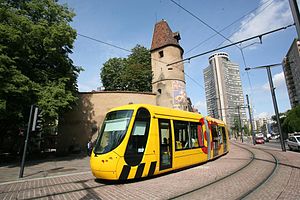 Mulhouse is served by EuroAirport Basel-Mulhouse-Freiburg, located 25 km (16 mi) south of the town.

Gare de Mulhouse is well connected with the rest of France by train, major destinations such as Paris, Dijon, Besançon, Belfort, Strasbourg, Lyon, Marseille, Montpellier and Lille being directly possible by train. There are also some trains which operate into Switzerland, such as Basel, Bern and Zürich. There is also a train service to Frankfurt am Main in Germany. A Eurocity service connects Brussels, Luxembourg, Strasbourg and Basel; this service calls at Mulhouse.

Transport within Mulhouse is provided by Soléa and comprises a network of buses together with the city's tram network, which opened on 13 May 2006. The tramway now consists of three tram lines and one tram-train line.

Mulhouse was the birthplace of:

Mulhouse is twinned with: