A multi-party system is a system in which multiple political parties across the political spectrum run for national election, and all have a similar or equal chance of gaining control of government offices, separately or in coalition government. A Multiparty system exists when there are several parties that have a significant number of seats in the legislature. Although it is best reflects the various minority arguments on an issue, the multiparty system tends to divide the people into so many different factions, that the majority is completely lost, leaving only a set of competing minorities. In the vast majority of multi-party systems, numerous major and minor political parties hold a serious chance of receiving office, and because they all compete, a majority may not control the legislature, forcing the creation of a coalition.[1] In some countries, every government ever formed since its independence has been by means of a coalition. Multi-party systems tend to be more common in parliamentary systems than presidential systems, and far more common in countries that use proportional representation compared to countries that use first past the post elections. This is because of Duverger's Law, which states that the number of viable political parties is one plus the number seats in a district. Proportional systems have multi-member districts, and thus a greater number of viable parties. It is very rare for national consensus on political issues apart from large issues such as national defence. First past the post requires concentrated areas of support for large representation in the Legislature whereas proportional representation better reflects the range of a population's views.

Brazil, Denmark, Finland, Germany, India, Indonesia, Ireland, Israel, Italy, Mexico, The Netherlands, New Zealand, Norway, Pakistan, Portugal, Romania, Serbia, South Africa, Spain, Sri Lanka, Sweden, Taiwan and Philippines are examples of nations that have used a multi-party system effectively in their democracies. In these countries, usually no single party has a parliamentary majority by itself. Instead, multiple political parties form coalitions for the purpose of developing power blocks for governing.

In some multi-party systems, only two or three parties have a substantial chance of forming a government with or without forming a cooalition. If only two parties are likely to win however that is a two party system where there are two major political parties and only they are likely to win an election. They also usually alternate in and out of government such was the case in the United Kingdom before 2010. This is the case in both Canada and the United Kingdom where majority governments are very common. In the UK, only the Conservative Party and the Labour Party have a serious chance of winning enough seats to form a government; another major party, the Liberal Democrats, have never had enough seats to form a government, but have held enough seats to be the lower half of a two party coalition.

Comparisons with other party systems 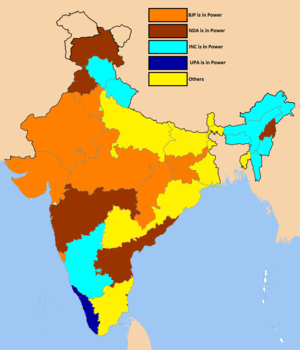 A system where only two parties have the possibility of winning an election is called two-party system. A system where only three parties have a realistic possibility of winning an election or forming a coalition is sometimes called a "Third-party system". But, in some cases the system is called a "Stalled Third-Party System," when there are three parties and all three parties win a large number of votes, but only two have a chance of winning a general election. Usually this is because the electoral system penalises the third party, e.g. as in UK politics. In the 2010 elections, the Liberal Democrats gained 23% of the total vote but won less than 10% of the seats due to the First-Past-The-Post electoral system. Despite this, they still had enough seats (and enough public support) for the other major two parties to form coalitions with them, or to make deals in order to gain their support. An example is the Conservative-Liberal Democrat coalition formed after the 2010 general election. Another is the Lib-Lab pact during Prime Minister James Callaghan's Minority Labour Government; when Labour lost its three-seat majority in 1977, the pact fell short of a full coalition.

Unlike a one-party system (or a two-party system), a multi-party system encourages the general constituency to form multiple distinct, officially recognized groups, generally called political parties. Each party competes for votes from the enfranchised constituents (those allowed to vote). A multi-party system prevents the leadership of a single party from controlling a single legislative chamber without challenge.

If the government includes an elected Congress or Parliament, the parties may share power according to proportional representation or the first-past-the-post system. In proportional representation, each party wins a number of seats proportional to the number of votes it receives. In first-past-the-post, the electorate is divided into a number of districts, each of which selects one person to fill one seat by a plurality of the vote. First-past-the-post is not conducive to a proliferation of parties, and naturally gravitates toward a two-party system, in which only two parties have a real chance of electing their candidates to office. This gravitation is known as Duverger's law. Proportional representation, on the other hand, does not have this tendency, and allows multiple major parties to arise. But, recent coalition governments, such as that in the U.K., represent two-party systems rather than multi-party systems. This is regardless of the number of parties in government.

A two-party system requires voters to align themselves in large blocs, sometimes so large that they cannot agree on any overarching principles. Some theories argue that this allows centrists to gain control. On the other hand, if there are multiple major parties, each with less than a majority of the vote, the parties are strongly motivated to work together to form working governments. This also promotes centrism, as well as promoting coalition-building skills while discouraging polarization.