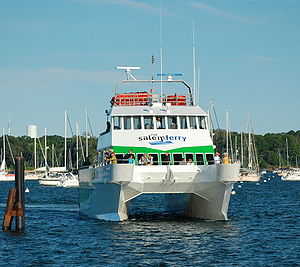 A multihull is a ship, vessel, craft or boat with more than one hull. Multihull ships (vessels, craft, boats) include multiple types, sizes and applications. Hulls range from two to five, of uniform or diverse types and arrangements

Catamarans are the most common type, with two symmetric hulls. They used as racing, sailing, tourist and fishing boats. About 70% of fast passenger and car-passenger ferries are catamarans. About 300 semi-submersible drilling and auxiliary platforms operate at sea.

Some ships with outriggers are built, including the experimental ship Tritone (UK) and the first and second sister-ships of the series of Littoral Combat Ships (US). About 70 small waterplan area ships whose hulls have a smaller cross section at the waterplane than below the surface exist.

Multihull ships can be classified by the number of hulls, by their arrangement and by their shapes and sizes.[1]

The first and last things are stabilized them by attaching outriggers to prevent them from capsizing. This led to the proa, catamaran, and trimaran plus various outriggers throughout the Pacific. 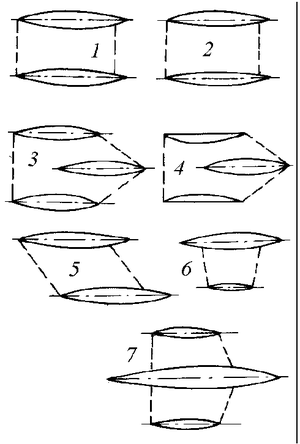 Individual hulls are connected by an above-water structure called the platform or above-water bridge. The structure can be watertight partially or fully, or can consist of separate connections.[2]

The distance between hulls is called the transverse clearance and can be measured between center planes or between the inner boards.

The distance between the design waterplane and the bottom of the above-water platform (wet deck) is called the vertical clearance.

An outrigger is a small side hull attached to the main load-carrying hull by two or more struts.

Proas have one hull and one outrigger. Engines are commonly placed on the main hull.

A ship with one hull of conventional shape and two small side hulls (outriggers) is called an outrigger ship. This type is identified as trimaran in English language publications.

Three terms from the Malay and Micronesian language group describe hull components. The terms originated as descriptions of the proa.[3] Catamarans and trimarans share the same terminology.[4]

Semantically, the catamaran is a pair of Vaka held together by Aka, whereas the trimaran is a central Vaka, with Ama on each side, attached by Aka.

Sometimes, the term catamaran is applied to any ship or boat consisting of two hulls. However, other twin-hull types include duplus and trisec

The trimaran has the widest range of interactions of wave systems generated by hulls at speed. The interactions can be favorable or unfavorable, depending on relative hull arrangement and speed. No authentic trimarans exist. Model test results and corresponding simulations provide estimates on the power of the full-scale ships. The calculations show possible advantages in a defined band of relative speeds.

A new type of super-fast vessel, the wave-piercing trimaran (WPT) is known as an air-born unloaded (up to 25% of displacement) vessel,[clarification needed] that can achieve twice the speed with a relative power. 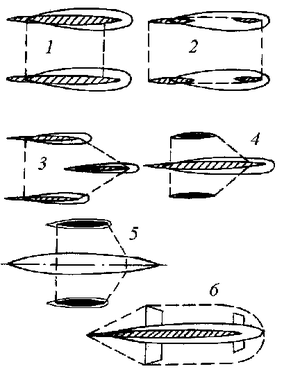 Hulls with beam designs that are narrower at the water surface (waterplane) than below can be classified as hulls with decreased or small waterplane area. More often the term small waterplane area hull means a hull with an underwater gondola and strut(s) that connect the gondola to the above-water platform. Any ship employing such hulls qualifies.

Any twin-hull SWA ship is called a small waterplane area twin hull (SWATH). A SWATH with one long strut on each hull is called a duplus (named after the first drilling ship of this type). The duplus is the most common type of SWA ships built.

A trisec is a SWATH ship with two struts on each gondola. A trisec can have a minimal waterplane area and minimal motions in waves, resulting in more effective motion control.

A triple-hull SWA ship is called a tricore, regardless of the number of struts. The term applies to ship with three identical SWA hulls. There are no built tricores, but towing tests of models show the possibility of sufficient advantage from a power point of view in defining band of the relative speeds.

Many traits differentiate multihulls from monohulls along several axes.

Multihulls have a broader variety of hull and payload geometries. They have a relatively large beam, deck area (upper and inner), above-water capacity, shallower draft (allowing operation in shallower water).

The Austronesians discovered that round logs tied together into a raft don't roll, or capsize as easily as a single log. Hollowing out the logs increased buoyancy (increasing payload) while preserving stability. However, this requires a lot of work and it has increased drag and weight.

Separating two logs by a pair of cross-members called akas achieved the increased stability at lower weight and less effort. Covering the intervening distance with a platform provides stability similar to a raft.

The inertia of a (heavier) monohull will drive it after the wind drops, while a (lighter) multihull requires wind. Monohulls can push through waves that a multihull must pass over. Multihulls are more prone towards hobby horsing especially when lightly loaded and of short overall length.

Other cultures stabilized their watercraft by filling the bottom with rocks and other ballast. The practice can be traced back to the Romans, Phoenicians, Vikings and others. Modern ocean liners carry tons of ballast. Naval architects enssure that the center of gravity of their designs remains substantially below the metacenter. The low centre of gravity acts as a counterweight as the craft rotates around its centre of buoyancy, creating a restorative force as the craft deviates from its vertical position.

Multihulls feature greater seaworthiness vs monohulls with the same displacement. Most production multihulls are officially rated as unsinkable. Watertight above-water platforms with sections protected by water-tight bulkheads can prevent sinking if the hulls fail. They have increased reliability because the engines are on separate hulls. However, capsized monohulls may right themselves, pulled by the ballast. Multihulls do not and larger vessels may require a crane. Their reduced weight and shallow draft make them unsuitable for use in icy waters.

Multihulls are substantially faster than monohulls of comparable size, in part because of their reduced weight, reduced draft and reduced waterline profile. However, their relatively greater total wetted area increases frictional resistance and total resistance at low speeds.[clarification needed]

Multihulls have more complicated conventional docking due to their wider beam. The beam requires a wider area for construction and dry dock and a larger haul-out ramp.

The added space and stability are valued amenities for small boat users.

Multihull powerboats, usually catamarans (never proas) are used for racing and transportation. Speed, maneuverability, and space are the main factors for choosing multihulls.

Multihulls are popular for racing, especially in Europe, New Zealand and Australia, and are somewhat popular for cruising in the Caribbean and South Pacific. They appear less frequently in the United States. Until the 1980s most multihull sailboats (except for beach cats) were built either by their owners or by boat builders. Since then companies have been selling mass-produced boats.

Mega or super catamarans are those over 60 feet in length. These often receive substantial customization following the request of the owner. One builder is New Zealand's Pachoud Yachts.

Builders include Corsair Marine (mid-sized trimarans) and Privilege (large catamarans). The Seawind, Perry and Lightwave. The largest manufacturer of large multihulls is Fontaine-Pajot in France.

Powerboats range from small single pilot Formula 1s to large multi-engined or gas turbined power boats that are used in off-shore racing and employ 2 to 4 pilots.