Kingston-upon-Thames (spelt with hyphens) was a local government district in north east Surrey, England from 1835 to 1965 around the town now known as Kingston upon Thames. It was alternatively known as Kingston on Thames (spelt with or without hyphens).[1][2] It was a municipal borough and also held the rarer status of Royal borough. The district was abolished in 1965 and was replaced with the larger London Borough of Kingston upon Thames in Greater London, with the Royal borough status passed to the new district. 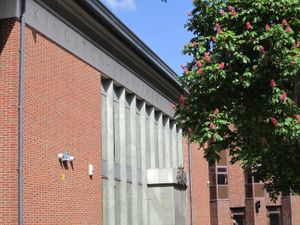 The façade of the Kingston County Court building showing the old spelling of the town's name. 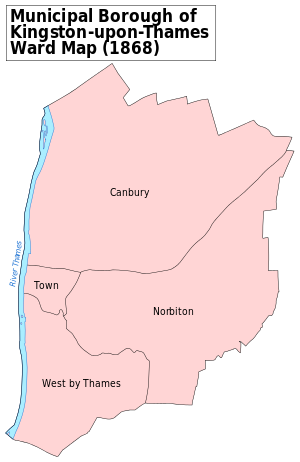 A map showing the wards of Kingston-upon-Thames Municipal Borough as they appeared in 1868.

It formed part of the expanded Metropolitan Police District from 1840 and the London Traffic Area from 1924.

It was known as a Royal borough through ancient custom and the right to the title was confirmed by George V in 1927.[3] The borough formed part of the London Passenger Transport Area from 1933.

It gained an area of 251 acres (1 km2) in the north west from the abolition of Ham Urban District in 1933[5] and was affected by a minor exchange of territory with the Municipal Borough of Richmond in 1958.[1]