Romford was a local government district in southwest Essex from 1851 to 1965.[2] It was significantly expanded in 1934 and gained the status of municipal borough in 1937. The population density of the district consistently increased during its existence[1] and its former area now corresponds to the northern part of the London Borough of Havering in Greater London.

Romford had formed a chapelry in the historic Liberty of Havering, becoming a civil parish in its own right in 1849. In 1851 a local board of health was set up for the parish; although its area was reduced in 1855 to cover only the town.[3] The local board convened at St Edward's Hall in Laurie Square from 1851 to 1853 and used the old liberty court house from 1853 to 1869. From 1869 it was based in offices in the marketplace and finally purchased the old court house in 1892. In 1894 the local board's area became Romford urban district as part of the Local Government Act 1894. This caused the parish to be divided into Romford Urban and Romford Rural, with the outer part becoming a component of Romford Rural District. 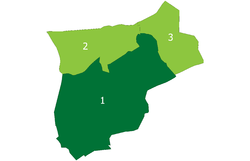 The Royal Commission on Local Government in Greater London considered the borough for inclusion in Greater London and in 1965 the municipal borough was abolished by the London Government Act 1963. Its former area was transferred to Greater London from Essex and combined with that of Hornchurch Urban District to form the present-day London Borough of Havering.