Southgate was a local government district of Middlesex from 1881 to 1965. It was part of the London postal district and Metropolitan Police District. 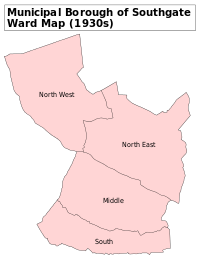 A map showing the wards of Southgate Municipal Borough

The area was historically part of the parish of Edmonton, which adopted the Public Health Act 1848 and formed a local board of health to govern the area in 1850. In 1879 the ratepayers of Southgate petitioned for their area to be separated from Edmonton, and in 1881 Southgate Local Board was established, with nine members.

It was created an urban district in 1894, under the Local Government Act 1894. The urban district council was increased in size to 12 councillors in 1900. In 1933 Southgate was granted a charter of incorporation and became a municipal borough. The corporation of the borough consisted of a mayor, seven aldermen and twenty-one councillors.[1]

The borough included Southgate itself as well as neighbouring areas, including Palmers Green. The borough was administered from Southgate Town Hall, which is situated on Green Lanes in Palmers Green, close to the junction with Broomfield Lane.