The archipelago of Ertholmene is not part of any municipality, but is administrated directly by the Ministry of Defence.

The existing coat of arms of the municipalities.

The Constitution of Denmark states: "Article 82. The right of municipalities to manage their own affairs independently, under State supervision, shall be laid down by statute."[1]

Council elections are held on the third Tuesday of November every four years. The previous were held November 19, 2013 and the next are due to be held November 21, 2017.

The newly formed 5 regional and 66 municipal councils acted as transitional merger committees (sammenlægningsudvalg) in 2006 with the responsibility of arranging the mergers of the old counties and municipalities into 5 and 66 new entities respectively. The 238 municipal councils and 13 county councils that were to be merged and replaced/abolished just continued their work one extra year beyond the fixed four-year term of office they were elected for (2002–2005) until 2006, and then ceased to exist. 32 municipalities including those of the recently formed Ærø Municipality (which was included in the reform) and Bornholm Regional Municipality (which was not included in the reform, merger decided locally by voters already May 2001) remained unchanged and were not merged with other municipalities.

A parliamentary majority (elected in 2001) backing the reform was secured already 24 June 2004 when the Danish People's Party (then 22 seats) said it would support an agreement with the government coalition of Venstre (then 56 seats) and the Conservative People's Party (then 16 seats), thus securing 94 seats (90 needed for a majority in the 179 seat Folketing). The final agreement from 2005 included more parties.

Until 1978 the fiscal year from 1 April to 31 March was in use in the public sector since a law was passed in 1849. As a consequence of a law passed by the Folketing in 1976, from 1 January 1979 the fiscal year is concurrent with the calendar year. Many reforms and laws passed prior to 1979 therefore have effect from 1 April.

The Municipal Reform of 2007 is the name given to the agreement of merging many municipalities, as well as replacing the 13 counties with five regions, which was ratified by the parties Venstre, Conservative People's Party, Danish People's Party, Social Democratic Party and Det Radikale Venstre on June 16, 2005 effective as of January 1, 2007. The reform replaced the structure of municipalities and counties introduced with the reform of 1970. 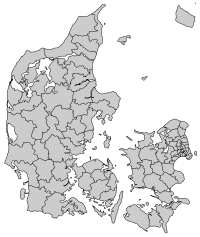