The municipalities (Finnish: kunta; Swedish: kommun) represent the local level of administration in Finland and act as the fundamental, self-governing administrative units of the country. The entire country is incorporated into municipalities and legally, all municipalities are equal, although certain municipalities are called cities or towns (Finnish: kaupunki; Swedish: stad). Municipalities have the right to levy a flat percentual income tax, which is between 16 and 22 percent, and they provide two thirds of public services. Municipalities control many community services, such as schools, health care and the water supply, and local streets. They do not maintain highways, set laws or keep police forces — these tasks are the responsibility of the central government.

Municipalities have council-manager government, i.e. they are governed by an elected council (kunnanvaltuusto, kommunfullmäktige), which is legally autonomous and answers only to the voters. The size of the council is proportional to the population, the extremes being 9 in Sottunga and 85 in Helsinki. A subsection of the council, the municipal executive board (kunnanhallitus), controls the municipal government and monitors the implementation of decisions of the council. Its decisions must be prepared by the council. Unlike national cabinets, its composition is derived from the composition of the council, not along government-opposition lines. Furthermore, individual decisions are prepared in specialized municipal boards (lautakunta) for a council meeting; these include e.g. zoning, social assistance, and education boards. Council, executive board and board membership is responsible position, not a full-time job.

Municipal managers (kaupunginjohtaja, stadsdirektör for cities, kunnanjohtaja, kommunsdirektör for other municipalities) are civil servants named by the council. The city manager of Helsinki is called ylipormestari/överborgmästare "Lord Mayor" for historical reasons. There were previously no mayors in Finland, but after a change in law, Tampere was first city to elect a mayor (pormestari/borgmästare) in 2007. The mayor is not, however, currently elected directly, but by the municipal council. The mayor acts as municipal manager and as a speaker of municipal council.

Although municipalities do not have police or legislative powers, local ordinances concerning traffic can be set, and municipal parking inspectors can give parking tickets. Municipalities are legal persons and can appear in an administrative court. Likewise, the state of Finland is a separate legal person.

Excluding judicial review of formal compliance to administrative law, municipalities are independent and not a part of a local state hierarchy. Municipalities cooperate in regions of Finland. State agencies have jurisdictions spanning one or more regions: each region is served by an ely-keskus (elinkeino-, liikenne- ja ympäristökeskus) on matters of employment, the economy, transport and environment, while law and environmental enforcement is handled by the local aluehallintovirasto, governing multi-region jurisdictions termed alue.

The municipal tax is a flat income tax that is levied on lower income levels than state taxes, which in contrast are progressive taxes. The lowest tax of 16% is found in Kauniainen, while a 20% tax is the other extreme. Municipalities also receive funding directly from the state (valtionapu). Municipalities levy a property tax on property, which is comparatively low. It is higher for summer cottages or other property intended for leisure. Municipalities receive part of the corporate tax yhteisövero income collected from companies having a place of business within their jurisdiction. Some functions are funded both by the municipality and the state, e.g. AMK schools.

The municipal tax, although in principle a flat tax, is affected by deductions, such that the real average tax percentage is lower than the nominal rate. Municipal taxes are collected by the state (Verohallinto) and paid to the municipalities.

Although municipalities are responsible for their own finances, there is much highly specific legislation and regulation that requires the services to be provided up to a standard. Thus, although municipalities have the power to voluntarily spend tax-generated income, they are required to first allocate funds to legally prescribed services.

Municipalities may provide some of these services through corporations that they own or from private companies that they regulate. For example, Helsinki Regional Transport Authority (HSL) provides public transport services in the capital area.

Although there are exceptions, the line between a city and a small town or rural municipality can be drawn at the city of Hamina with 20,800 inhabitants. In the population ranking, above Hamina there are only cities (and their surrounding areas). However, there are many cities with much smaller populations than Hamina. Finland's smallest city, Kaskinen, dates back to 1785 but had a population of only 1,301 (31 March 2016).[2]

Municipalities were originally parishes. The old word for a municipality is pitäjä, 'keeper', because when the system was instituted, one municipality kept one minister. Municipalities were divided into villages, which consisted of individual properties. Borders between properties and thus municipalities were defined by oral agreements passed down from generation to generation; usually along straight lines between defined markers such as boulders. Medieval documentation survives only from legal disputes concerning borders. Furthermore, the secular government divided the properties to taxable units (villages and secular municipalities) according to its own convenience; thus, they not necessarily convergent with parishes. Furthermore, cities were chartered separately. Up to 1734, the law was different in cities than in rural municipalities.

Coat of arms of Vantaa, incorporating the heraldic colors of the region of Uusimaa (azure, charges or, argent).

Not all municipalities have an obvious urban center; indeed, rural municipalities are often composed of distributed rural villages. Although the church village (kirkonkylä, abbreviated kk) is the historical center, the largest or administrative center may be in another village. For example, Askola has a church village (Askolan kirkonkylä), but its administrative center is in Monninkylä. Often, the church village has the same name as the municipality, as with Askola. However, this is not necessarily so, e.g. Enontekiö is governed from Hetta; these villages are often erroneously labeled in maps. This is expectable as the name of the municipality refers to the entire parish, not just a single center like a church village.

Although related, population centers (taajama) are not local administrative units. A catalog is independently compiled each year by Statistics Finland, a state agency, and used primarily for traffic-related purposes (signage, speed limits, highway planning). There are 745 population centers in Finland, 49 of them have more than 10,000 inhabitants and six more than 100,000. Villages have no administrative role, although some have voluntary village associations (kyläyhdistys) and other non-governmental public life.

Distinctively, the capital area, or Greater Helsinki, has no special arrangements. The area consists of four entirely independent cities that form a continuous conurbation. Greater Helsinki has grown in population and area relatively quickly: the nearby municipalities, considered rural only 50 years ago, have become suburbs, and the growth is projected to continue. A state-imposed merger of Helsinki and a part of Sipoo, a rural, 40% Swedish-speaking municipality adjacent to Greater Helsinki, was recently approved by the government, counter to the opinion of the Sipoo municipal council. This area will effectively become a new (and Finnish-speaking) suburb with multiple times the inhabitants than there are in Sipoo.

There is currently a heated political debate in Finland about reforming the municipality system. Essentially, a large number of small municipalities is seen as detrimental to the provision of public services, having been originated from a time when horses and carriages were used for transport, and there have been suggestions of state-imposed mergers. A committee led by Minister for Regional and Municipal Affairs Hannes Manninen suggested creating a two-tier system of municipalities with different powers, while the Association of Finnish Local and Regional Authorities (Kuntaliitto) favoured a system where municipalities would be units of at least 20,000–30,000 inhabitants, cf. the current median at 4,700. The motion has been inspired by a similar reform in Denmark (see Municipalities of Denmark). Former government (Vanhanen II), however, planned to not impose mergers.

Recently, a large number of voluntary mergers have been agreed on.[4] Ten mergers were completed in 2005, one in 2006, 14 in 2007 and one in 2008. In 2009, there were even more, and many of those mergers consolidated more than two municipalities. Several cities merged with surrounding rural municipalities in Hämeenlinna, Salo, Kouvola, Seinäjoki, Naantali, Kauhava, Lohja, Raseborg, Jyväskylä and Oulu in 2009. In total, there were 32 mergers, involving 99 municipalities, that reduced the number of municipalities by 67. The year 2009 also marked the end of the last maalaiskunta, a municipality surrounding a city but sharing the name, in Jyväskylä. There were four mergers in 2010, six in 2011 and ten in 2013. In the period 2005–2013, the number of municipalities was voluntarily reduced from 444 to 320.

In 2012, Katainen's government published an extensive plan aiming at merging municipalities to reach a target of population 20,000 per municipality. Commuter belts have also been proposed as a target by a government committee, such that municipalities where more than 35% of workforce commutes would be subject to a merger.[5] 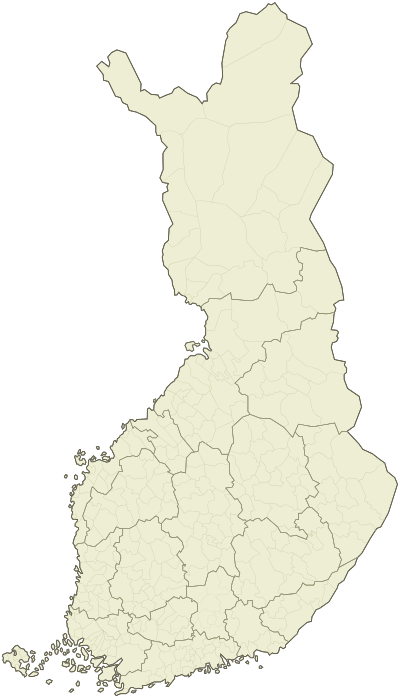