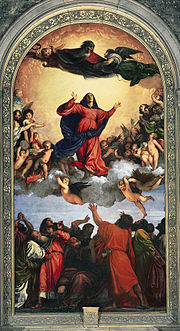 Munificentissimus Deus (Latin: The most bountiful God) is the name of an Apostolic constitution written by Pope Pius XII. It defines ex cathedra the dogma of the Assumption of the Blessed Virgin Mary. It was the first ex-cathedra infallible statement since the official ruling on papal infallibility was made at the First Vatican Council (1869–1870). In 1854 Pope Pius IX made an infallible statement with Ineffabilis Deus on the Immaculate Conception of the Virgin Mary, which was a basis for this dogma. The decree was promulgated on November 1, 1950.[1]

Pope Pius XII's previous encyclical Deiparae Virginis Mariae (May 1, 1946) to all Catholic bishops stated that for a long time past, numerous petitions had been received from cardinals, patriarchs, archbishops, bishops, priests, religious of both sexes, associations, universities and innumerable private persons, all begging that the bodily Assumption into heaven of the Blessed Virgin should be defined and proclaimed as a dogma of faith.[citation needed] This was also fervently requested by almost two hundred fathers in the Vatican Council (1869–1870).[citation needed]

Following the example of Pope Pius IX, who canvassed Catholic bishops before proclaiming the dogma of the Immaculate Conception, Pius XII asked all bishops for their opinion.

"Actually God, who from all eternity regards Mary with a most favorable and unique affection, has 'when the fullness of time came' put the plan of his providence into effect in such a way that all the privileges and prerogatives he had granted to her in his sovereign generosity were to shine forth in her in a kind of perfect harmony. And, although the Church has always recognized this supreme generosity and the perfect harmony of graces and has daily studied them more and more throughout the course of the centuries, still it is in our own age that the privilege of the bodily Assumption into heaven of Mary, the Virgin Mother of God, has certainly shone forth more clearly".[2]

At issue was not the belief in the Assumption, but its dogmatisation. Munificentissimus Deus reports popular acclaim and "nearly unanimous" approval of the contemporary bishops. The names of the bishops attending the dogma celebration in 1950 are listed at the entrance of St. Peter's Basilica.

The decree surveys theological history, especially the history of the belief in the Catholic Christian tradition, ... "the holy Fathers and Doctors of the Church have never failed to draw enlightenment from this fact",[3] Munificentissimus Deus reviews the history of Catholic liturgy and the many liturgical books, ... "which deal with the feast either of the Dormition or of the Assumption of the Blessed Virgin",[4] and the teaching of previous popes. Munificentissimus Deus cites also the teaching of previous bishops and such writers as John of Damascus, Francis de Sales, Robert Bellarmine, Anthony of Padua and Albert the Great among others.

The dogma of the Assumption

"By the authority of our Lord Jesus Christ, of the Blessed Apostles Peter and Paul, and by our own authority, we pronounce, declare, and define it to be a divinely revealed dogma: that the Immaculate Mother of God, the ever Virgin Mary, having completed the course of her earthly life, was assumed body and soul into heavenly glory".[5]

Relevance to the faithful

In the dogmatic statement, the phrase "having completed the course of her earthly life" was carefully written to leave open the question of whether or not Mary died before her Assumption, or whether, like the Assumption of the Prophet Elijah, Mary was assumed before death; both possibilities are allowed in the formulation. In articles 14, 17 and 20 of the dogmatic pronouncement, however, it is stated that Mary had indeed died: "...the dead body of the Blessed Virgin Mary remained incorrupt, but ... she gained a triumph out of death, her heavenly glorification after the example of her only begotten Son, Jesus Christ...".

The entire decree (and the title itself) is also worded to suggest that Mary's Assumption was not in any sense a logical necessity, but rather a divine gift to Mary as Mother of God. Munificentissimus Deus teaches that Mary lived and completed her life as a shining example to the human race. The gift of her assumption is offered to all the faithful and signifies what to hope for at the end of time. Her assumption signifies God's intention to all those faithful to Him.

"Thus, while the illusory teachings of materialism and the corruption of morals that follows from these teachings threaten to extinguish the light of virtue and to ruin the lives of men by exciting discord among them, in this magnificent way all may see clearly to what a lofty goal our bodies and souls are destined. Finally it is our hope that belief in Mary's bodily Assumption into heaven will make our belief in our own resurrection stronger and render it more effective."

Paul Tillich asked fellow Protestant theologian Reinhold Niebuhr in March 1950, about eight months before the decree was promulgated, if he expected the Pope to make the declaration about Mary's assumption ex cathedra. Niebuhr replied: "I don't think so; he is too clever for that; it would be a slap in the face of the whole modern world and it would be dangerous for the Roman Church to do that today".[6]

Literature before the definition