Murad I (Ottoman Turkish: مراد اول‎, Turkish: I. Murat Hüdavendigâr (nicknamed Hüdavendigâr, from Persian: خداوندگار, Khodāvandgār, "the devotee of God" – but meaning "sovereign" in this context; 29 June 1326, Amasya – 15 June 1389, Kosovo Field)), was the Ottoman Sultan from 1362 to 1389. He was a son of Orhan and the Valide Nilüfer Hatun.

Murad I conquered Adrianople, renamed it to Edirne,[1] and in 1363 made it the new capital of Ottoman Sultanate.[2] Then he further expanded the Ottoman realm in Southeast Europe by bringing most of the Balkans under Ottoman rule, and forced the princes of northern Serbia and Bulgaria as well as the Byzantine emperor John V Palaiologos to pay him tribute.[1] Murad I administratively divided his sultanate into the two provinces of Anatolia (Asia Minor) and Rumelia (the Balkans). Murad's death against the Serbs would cause the Ottomans to halt their expansion into the territory temporarily and focus their attention once more on the ailing Byzantine Empire.[citation needed] 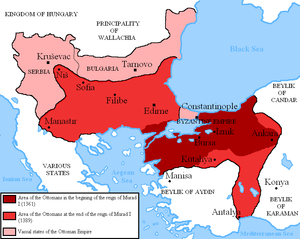 Map of the conquests of Murad I

Murad fought against the powerful beylik of Karaman in Anatolia and against the Serbs, Albanians, Bulgarians and Hungarians in Europe. In particular, a Serb expedition to expel the Turks from Adrianople led by the Serbian brothers King Vukašin and Despot Uglješa, was defeated on September 26, 1371, by Murad's capable second lieutenant Lala Şâhin Paşa, the first governor (beylerbey) of Rumeli. In 1385, Sofia fell to the Ottomans. In 1386 Prince Lazar Hrebeljanović defeated an Ottoman force at the Battle of Pločnik. The Ottoman army suffered heavy casualties, and was unable to capture Niš on the way back.

In 1389, Murad's army defeated the Serbian Army and its allies under the leadership of Lazar at the Battle of Kosovo. There are different accounts from different sources about when and how Murad I was assassinated. The contemporary sources mainly noted that the battle took place and that both Prince Lazar and the Sultan lost their lives in the battle. The existing evidence of the additional stories and speculations as to how Murad I died were disseminated and recorded in the 15th century and later, decades after the actual event. One Western source states that during first hours of the battle, Murad I was assassinated by Serbian nobleman and knight Miloš Obilić by knife.[3][4] Most Ottoman chroniclers[citation needed] (including Dimitrie Cantemir) [5] state that he was assassinated after the finish of the battle while going around the battlefield. Others state that he was assassinated in the evening after the battle at his tent by the assassin who was admitted to ask a special favour.[citation needed] His older son Bayezid, who was in charge of the left wing of the Ottoman forces, took charge after that. His other son, Yakub Bey, who was in charge of the other wing, was called to the Sultan's command center tent by Bayezid, but when Yakub Bey arrived he was strangled, leaving Bayezid as the sole claimant to the throne.

A letter of Florentine senate (written by Coluccio Salutati) to the King Tvrtko I of Bosnia, dated 20 October 1389, Murad I's (and Jakub Bey's) killing was described. A party of twelve Serbian lords slashed their way through the Ottoman lines defending Murad I. One of them, allegedly Miloš Obilić, had managed to get through to the Sultan's tent and kill him with sword stabs to the throat and belly. [6][page needed]

Sultan Murad's internal organs were buried in Kosovo field and remains to this day on a corner of the battlefield in a location called Meshed-i Hudavendigar which has gained a religious significance by the local Muslims. It has been vandalized between 1999-2006 and renovated recently. His other remains were carried to Bursa, his Anatolian capital city, and were buried in a tomb at the complex built in his name.[citation needed]

He established the sultanate by building up a society and government in the newly conquered city of Adrianople (Edirne in Turkish) and by expanding the realm in Europe, bringing most of the Balkans under Ottoman rule and forcing the Byzantine emperor to pay him tribute. It was Murad who established the former Osmanli tribe into an sultanate. He established the title of sultan in 1383 and the corps of the janissaries and the devşirme recruiting system. He also organised the government of the Divan, the system of timars and timar-holders (timariots) and the military judge, the kazasker. He also established the two provinces of Anadolu (Anatolia) and Rumeli (Europe).

He was the son of Orhan and the Valide Hatun Nilüfer Hatun, daughter of the Prince of Yarhisar, who was of ethnic Greek descent[7]

Media related to Murad I at Wikimedia Commons