Murad II's reign was marked by the long war he fought against the Christian feudal lords of the Balkans and the Turkish beyliks in Anatolia, a conflict that lasted 25 years. He was brought up in Amasya, and ascended the throne on the death of his father Mehmed I. His mother was Valide Sultan Emine Hatun (daughter of Suleyman Bey, ruler of Dulkadirids), his father's third consort. Their marriage served as an alliance between the Ottomans and this buffer state, and produced a son, Mehmed II, who would go on to successfully conquer the Byzantine Empire's capital, Constantinople, in 1453.

Murad was born in June 1404 to Sultan Mehmed I and his wife Emine Hatun, and he spent his early childhood in Amasya. In 1410, Murad came along with his father to the Ottoman capital, Edirne. After his father ascended to the Ottoman throne, he made Murad governor of the Amasya Sanjak. Murad remained at Amasya until the death of Mehmed I in 1421. He was solemnly recognized as sultan of the Ottoman Sultanate at sixteen years of age, girded with the sabre of Osman at Bursa, and the troops and officers of the state willingly paid homage to him as their sovereign. 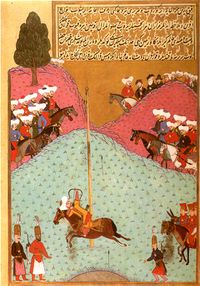 Murad's reign was troubled by insurrection early on. The Byzantine Emperor, Manuel II, released the 'pretender'[1] Mustafa Çelebi (known as Düzmece Mustafa) from confinement and acknowledged him as the legitimate heir to the throne of Bayezid I (1389–1402). The Byzantine Emperor had first secured a stipulation that Mustafa should, if successful, repay him for his liberation by giving up a large number of important cities. The pretender was landed by the Byzantine galleys in the European dominion of the sultan and for a time made rapid progress. Many Turkish soldiers joined him, and he defeated and killed the veteran general Beyazid Pasha, whom Murad had sent to fight him. Mustafa defeated Murad's army and declared himself Sultan of Adrianople (modern Edirne). He then crossed the Dardanelles to Asia with a large army; but the young Sultan showed in this emergency that he possessed military and political abilities worthy of his best ancestors. Mustafa was out-manoeuvered in the middle of the field, and his troops, whose confidence in his person and cause he had lost by his violence and incapacity, passed over in large numbers to Murad II. Mustafa took refuge in the city of Gallipoli, but the sultan, who was greatly aided by a Genoese commander named Adorno, besieged him there and stormed the place. Mustafa was taken and put to death by the sultan, who then turned his arms against the Roman emperor and declared his resolution to punish the Palaiologos for their unprovoked enmity by the capture of Constantinople. 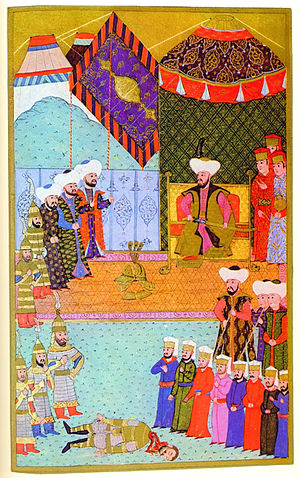 Murad II then formed a new army called Azeb in 1421 and marched through the Byzantine Empire and laid siege to Constantinople. While Murad was besieging the city, the Byzantines, in league with some independent Turkish Anatolian states, sent the sultan's younger brother Küçük Mustafa (who was only 13 years old) to rebel against the sultan and besiege Bursa. Murad had to abandon the siege of Constantinople in order to deal with his rebellious brother. He caught Prince Mustafa and executed him. The Anatolian states that had been constantly plotting against him — Aydinids, Germiyanids, Menteshe and Teke — were annexed and henceforth became part of the Ottoman Sultanate.

Murad II then declared war against Venice, the Karamanid Emirate, Serbia and Hungary. The Karamanids were defeated in 1428 and Venice withdrew in 1432 following the defeat at the second Siege of Thessalonica in 1430. In the 1430s Murad captured vast territories in the Balkans and succeeded in annexing Serbia in 1439. In 1441 the Holy Roman Empire and Poland joined the Serbian-Hungarian coalition. Murad II won the Battle of Varna in 1444 against János Hunyadi.

Murad II relinquished his throne[2] in 1444 to his son Mehmed II, but a Janissary revolt[3] in the Empire forced him to return.

In 1448 he defeated the Christian coalition at the Second Battle of Kosovo (the first one took place in 1389). When the Balkan front was secured, Murad II turned east to defeat Timur's son, Shah Rokh, and the emirates of Karamanid and Çorum-Amasya. In 1450 Murad II led his army into Albania and unsuccessfully besieged the Castle of Kruje in an effort to defeat the resistance led by Skanderbeg. In the winter of 1450–1451, Murad II fell ill, and died in Edirne. He was succeeded by his son Mehmed II (1451–81).

Murad II is portrayed by İlker Kurt in 2012 film Fetih 1453. He was also portrayed by Vahram Papazian in the Albanian movie The Great Warrior Skanderbeg in 1953.