Murad IV (Ottoman Turkish: مراد رابع‎, Murād-ı Rābiʿ; July 26/27, 1612 – February 8, 1640) was the Sultan of the Ottoman Empire from 1623 to 1640, known both for restoring the authority of the state and for the brutality of his methods. Murad IV was born in Istanbul, the son of Sultan Ahmed I (r. 1603–17) and the ethnic Greek Kösem Sultan.[1] Brought to power by a palace conspiracy in 1623, he succeeded his uncle Mustafa I (r. 1617–18, 1622–23). He was only 11 when he took the throne. His reign is most notable for the Ottoman–Safavid War (1623–39), of which the outcome would permanently part the Caucasus between the two Imperial powers for around two centuries, while it also roughly laid the foundation for the current Turkey - Iran - Iraq borders.

In the early years of Murad's reign, he was under the control of his relatives. His absolute rule started around 1632, when he took the authority and repressed all the tyrants, and he re-established the supremacy of the Sultan. 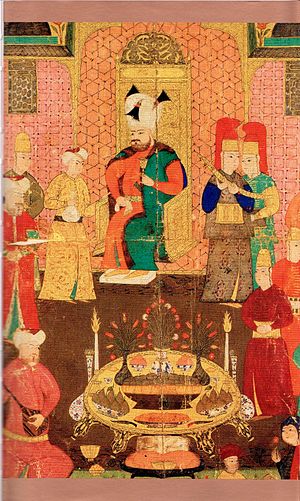 Murad IV was for a long time under the control of his relatives and during his early years as Sultan, his mother, Kösem Sultan, essentially ruled through him. The Empire fell into anarchy; the Safavid Empire invaded Iraq almost immediately, Northern Anatolia erupted in revolts, and in 1631 the Janissaries stormed the palace and killed the Grand Vizier, among others. Murad IV feared suffering the fate of his elder brother, Osman II (1618–22), and decided to assert his power.

At the age of 16 in 1628, he had his brother-in-law (his sister Fatma Sultan's husband) and the former governor of Egypt Kara Mustafa Pasha executed for a claimed action "against the law of God".[2]

Murad IV tried to quell the corruption that had grown during the reigns of previous Sultans, and that had not been checked while his mother was ruling through proxy.

Murad IV also banned alcohol, tobacco, and coffee in Istanbul.[3] He ordered execution for breaking this ban.[4] He would reportedly patrol the streets and the lowest taverns of Istanbul in civilian clothes at night, policing the enforcement of his command by casting off his disguise on the spot and beheading the offender with his own hands.[5] Rivaling the exploits of Selim the Grim, he would sit in a kiosk by the water near his Seraglio Palace[5] and shoot arrows at any boat man who rowed too close to his imperial compound. He restored the judicial regulations by very strict punishments, including execution, he once strangled a grand vizier for the reason that the official had beaten his mother-in-law.[5] Historians including Halil İnalcık as well as primary sources report that even though he was a ruthless supporter of alcohol prohibition, Murad IV was a habitual drinker himself.[6][7]

Murad IV's reign is most notable for the Ottoman–Safavid War (1623–39) against Persia in which Ottoman forces managed to conquer Azerbaijan, occupying Tabriz, Hamadan, and capturing Baghdad in 1638. Murad IV himself commanded the invasion of Mesopotamia and proved to be an outstanding field commander. By the Treaty of Zuhab which followed after the war, it roughly comprised and confirmed the borders as per the Peace of Amasya, with Eastern Armenia, Eastern Georgia, Azerbaijan, and Dagestan staying Persian, while Western Armenia, and Western Georgia staying Ottoman.[8] Mesopotamia was irrevocably lost for the Persians.[9] The borders per the outcome of the war is more or less the present border line between Turkey - Iraq and Iran.

During the siege of Baghdad, the city withstood the siege for forty days, but was compelled to surrender, and the bulk of the population were butchered by the conquerors, in spite of the promises which they had made to spare them. It is said that the officers of Murad arranged a sort of tableau, in which the heads were struck off one thousand captives by one thousand headsmen at the same moment, and that Murad IV enjoyed the sight.

Murad IV himself commanded the Ottoman army in the last years of the war, and proved to be an outstanding field commander. He was the third Ottoman Sultan to command an army on the battlefield since the death of Suleiman the Magnificent in 1566.

Sultan Murad IV put emphasis on architecture and in his period many monuments were erected. Some of them are Meydanı Mosque, Bayram Pasha Dervish Lodge, Tomb, Fountain, Primary School, Konya Serefeddin Mosque.

The Mughal Emperor Shah Jahan had exchanged ambassadors with the Ottoman Sultan Murad IV, it was through these exchanges that he received Isa Muhammad Effendi and Ismail Effendi, two Turkish architects and students of the famous Koca Mimar Sinan Agha. Both of them later comprised among the Mughal team that would design and build the Taj Mahal.

Relations with the Mughal Empire

In the year 1626, the Mughal Emperor Jahangir began to contemplate an alliance between the Ottomans, Mughals and Uzbeks against the Safavids, who had defeated the Mughals at Kandahar. He even wrote a letter to the Ottoman Sultan Murad IV, Jahangir's ambition however did not materialize due to his death in 1627. However, Jahangir's son and successor Shah Jahan pursued the goal of alliance with the Ottoman Empire.

While he was encamped in Baghdad, Murad IV is known to have met the Mughal Emperor Shah Jahan's ambassadors: Mir Zarif and Mir Baraka, who presented 1000 pieces of finely embroidered cloth and even armor. Murad IV gave them the finest weapons, saddles and Kaftans and ordered his forces to accompany the Mughals to the port of Basra, where they set sail to Thatta and finally Surat.[10]

Murad IV was known having affairs with both men and women.[11][better source needed] In his Iran campaign he brought the commander of Revan Castle Emirgûneoğlu Tahmasp Kulu Khan to Istanbul, changed his name to Yusuf Pasha and made a garden namely "Feridun Bahçesi" for him. According to Dimitri Kantemir and Eremya Çelebi Murad IV was constantly meeting the well known homosexuals of time Yusuf Pasha, Musa Çelebi and Silahtar Mustafa Pasha in "Feridun Bahçesi".[12][better source needed]

Very little is known about the concubines of Murad IV, principally because he did not leave sons who survived his death to reach the throne but, privy purse registers record the presence of one haseki, Ayşe Sultan, until the very end of Murad's seventeen-year reign, when a second haseki appears.[13] It is possible that Murad had only a single concubine until the advent of the second, or that he had a number of concubines but singled out only one as haseki.[13] If Ayse was his only concubine, it is possible that it was fear of lack of male issue that prompted the sultan to take another, for his sons all died in infancy.[13]

Rumours had circulated that on his deathbed, Murad IV ordered the execution of his mentally disabled brother, Ibrahim I (reigned 1640–48), which would have meant the end of the Ottoman line. However, the order was not carried out.[15]

In the TV series Muhteşem Yüzyıl: Kösem, Murad IV is portrayed by Cağan Efe Ak as a child, and Metin Akdülger as a sultan.