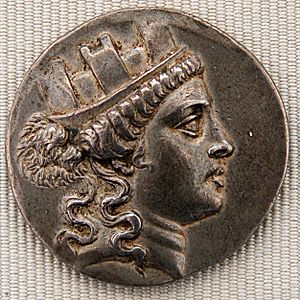 Mural crown on Cybele (silver tetradrachm issued by Smyrna, 160–150 BC)

A mural crown (Latin: corona muralis) is a crown or headpiece representing city walls or towers. In classical antiquity, it was an emblem of tutelary deities who watched over a city, and among the Romans a military decoration. Later the mural crown developed into a symbol of European heraldry, mostly for cities and towns, and in the 19th and 20th centuries was used in some republican heraldry.

In Hellenistic culture, a mural crown identified the goddess Tyche, the embodiment of the fortune of a city, familiar to Romans as Fortuna. The high cylindrical polos of Cybele too could be rendered as a mural crown in Hellenistic times, specifically designating the mother goddess as patron of a city.[1] 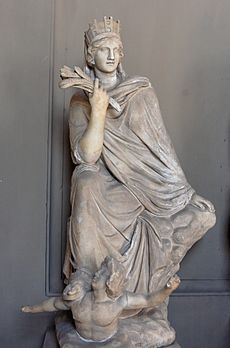 The Tyche of Antioch, Roman version of a 3rd-century BC bronze by Eutychides

The mural crown became an ancient Roman military decoration. The corona muralis (Latin for "walled crown") was a golden crown, or a circle of gold intended to resemble a battlement, bestowed upon the soldier who first climbed the wall of a besieged city or fortress to successfully place the standard of the attacking army upon it.[2][3] The Roman mural crown was made of gold, and decorated with turrets,[4] as is the heraldic version. As it was among the highest order of military decorations, it was not awarded to a claimant until after a strict investigation.[5] The rostrata mural crown, composed of the rostra indicative of captured ships, was assigned as naval prize to the first in a boarding party, similar to the naval crown.

The Graeco-Roman goddess Roma's attributes on Greek coinage usually include her mural crown, signifying Rome's status as a loyal protector of Hellenic city-states.[6] 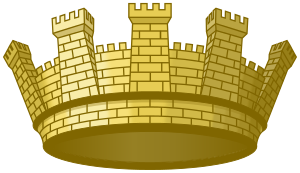 The Roman military decoration was subsequently employed in European heraldry, where the term denoted a crown modeled after the walls of a castle, which may be tinctured or, argent, gules, or proper, i.e. stone-coloured. In 19th-century Germany, mural crowns (Mauerkronen) came to be adopted for the arms of cities, with increasingly specific details: "Residential (i.e. having a royal residence) cities and capital towns usually bear a Mauerkrone with five towers, large towns one with four towers, smaller towns one with three", observed Arthur Charles Fox-Davies, in A Complete Guide to Heraldry, adding "Strict regulations in the matter do not yet exist" and warning that the usage was not British.[7]

In recent times,[when?] mural crowns were used, rather than royal crowns, for medieval and modern Italian communes. A mural-crowned lady, Italia Turrita, personifies Italy. In Italy, communes and some provinces and military corps have a mural crown on their coat of arms: gold with five towers for cities, and silver with nine-towered for others. The coat of arms of the Second Spanish Republic had a mural crown.

In the beginning of the 20th century, Portugal established strict rules for its municipal heraldry in which, each coat of arms contains a mural crown, with three apparent silver towers signifying a village or an urban parish, four silver towers representing a town, five silver towers standing for a city and five gold towers for a capital city. The mentioned Portuguese rules regarding the use of mural crowns are also applied in most of the municipal coat of arms of Brazil and some other members of the Community of Portuguese Language Countries.

The Romanian municipal coats of arms contain a mural crown, with one or three towers for villages and communes, five and seven towers for towns and municipalities.