Members of the Murdoch family are prominent as international media  proprietors, especially in Australia, the United Kingdom  and United States. Some members have also been prominent in the arts, clergy and military in Australia.

Five generations of the family are descended from two Scottish emigrants to Australia: the Reverend James Murdoch (1818–1884), a minister of the Free Church of Scotland and his wife Helen, née Garden (1826–1905).[1] Both were from the Pitsligo area of Aberdeenshire and emigrated to the Colony of Victoria in 1884.[1]

The Rev. James Murdoch married Helen Murdoch and together, they had 14 children.[1]

The Rev. Patrick Murdoch was born in Pitsligo and raised at Rosehearty, Aberdeenshire.[1][2] He was ordained at Cruden, Aberdeenshire, where he also married Annie Brown (in 1882). At the age of 34, Murdoch emigrated with his wife and parents to Victoria. He was a prominent there as a Presbyterian minister and published several books on theology. Two of Patrick and Annie Murdoch's six children achieved prominence, Sir Keith Murdoch and Ivon George Murdoch.[1] 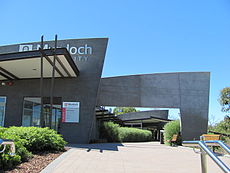 The Peel campus of Murdoch University, which is named after Sir Walter Murdoch.

Sir Walter Murdoch KCMG, who was born at Rosehearty, was a prominent Australian academic and essayist. He married Violet Catherine Hughston in 1897. Murdoch published his first essay, "The new school of Australian poets", in 1899 and for many years he wrote a weekly column titled "Books and Men" for the Melbourne Argus (under the pen name of "Elzevir").[4] His academic career began with an appointment in 1904 as an assistant lecturer in English at Melbourne University.[citation needed]

In 1913, he was appointed founding Professor of English at the University of Western Australia (UWA). During the 1920s, his essays were syndicated across Australia through the Herald & Weekly Times newspaper group run by his nephew, Sir Keith Murdoch (see below). Collections of Walter Murdoch's writings were published in book form from the 1930s onward. He was appointed a Companion of the Order of St Michael and St George (CMG) in 1939, served as Chancellor of UWA in 1943–48 and was made a Professor Emeritus upon his retirement. Violet Murdoch died in 1952 and 10 years later Murdoch remarried, to Barbara Marshall Cameron. He was appointed a Knight Commander of the Order of St Michael and St George (KCMG) in 1964.[4] 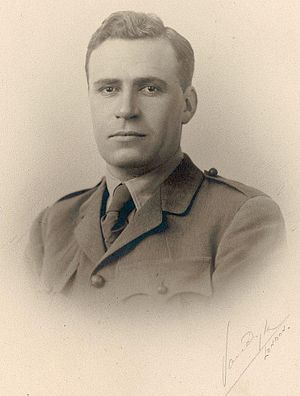 Keith Arthur Murdoch, later Sir Keith Murdoch, was born in West Melbourne and grew up in the Melbourne suburb of Camberwell.[5]

He became prominent as a journalist, while serving as a war correspondent during World War I. In 1921, Murdoch was appointed chief editor of the Melbourne Herald and in 1928 became managing director of its parent company, The Herald and Weekly Times Ltd. That same year he married Elisabeth Joy Greene (1909–2012), who was later prominent as the philanthropist Dame Elisabeth Murdoch AC, DBE (1909–2012). Murdoch was knighted in 1933. During World War II, Sir Keith Murdoch served briefly in an Australian government role, as Director-General of Information.[6]

Lieutenant Ivon George Murdoch MC and bar, saw action with the 8th Battalion (AIF) on the Western Front during World War I.[7][8]

Ivon Murdoch achieved the rare distinction of twice being awarded the Military Cross (MC) for bravery; his first resulted from him leading extended night patrols, during March and April 1918, south-east of Ypres in No Man's Land and behind German lines, which captured a pillbox and returned wounded men to Australian positions.[citation needed] The second MC was awarded for actions during August 1918 that: successfully defended recently captured German field guns near Rosieres and; set up a machine gun enfilade, during the Battle of Lihons (part of the Hundred Days Offensive). After the war, Ivon Murdoch was a farmer at Wantabadgery, New South Wales.[citation needed] 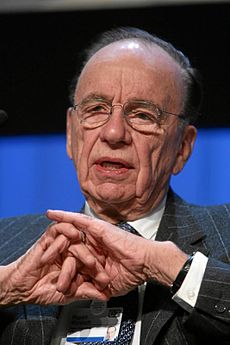 Rupert Murdoch AC, KSG, born in Melbourne, is a major international media proprietor – he chairs two United States-based companies that control most of his assets: News Corp and 21st Century Fox. Murdoch's career as a media proprietor began in 1952, when he inherited his father's stake in News Limited.[9] The company's only major asset was an in Adelaide daily newspaper distributed only in South Australia, The News. During the 1950s and 1960s, News Ltd acquired daily and weekly newspapers, including suburban and provincial publications, throughout Australia and New Zealand. From 1968, Murdoch bought British newspapers, beginning with the weekly News of the World and the daily The Sun.[10]

Murdoch made his first acquisition in the United States in 1973, when he purchased the San Antonio Express-News. Soon afterwards, he founded a US supermarket tabloid Star, and in 1976, he purchased the New York Post.[9]

In 1981, Murdoch acquired The Times of London and The Sunday Times. He bought a major stake in 20th Century Fox in 1984, which became the basis of a new US free to air television network, Fox Broadcasting Company.[9] To satisfy a legal requirement that only US citizens could own US television stations, Murdoch became a naturalised US citizen in 1985, and consequently forfeited his Australian citizenship.[11][12]

During the 1980s and 1990s, Murdoch became involved in pay television interests throughout the world, including STAR TV and Tata Sky in Asia and BSkyB, Sky Italia and Sky Deutschland in Europe. NewsCorp also came to control both a major international publishing house HarperCollins, and Dow Jones & Company, which includes The Wall Street Journal.[citation needed]

Rupert Murdoch has been married four times and has six children: 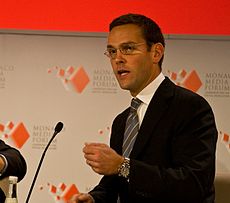 Prue Murdoch (born in Adelaide) has held directorial roles within the News Corporation empire. She has been married twice:

Elisabeth Murdoch (born in Sydney), is a media executive and company director and has been married twice.

James R. Murdoch (born in London), is a media executive and company director. In 2000, he married the US public relations specialist and climate change activist Kathryn Hufschmid. They have three children,[17] Anneka Murdoch (2003– ), Walter Murdoch (2006– ) and Emerson Murdoch (2008– ).