Muriel Lilian Pavlow (born 27 June 1921) is a British actress.[1] Her mother was French and her father was Russian. 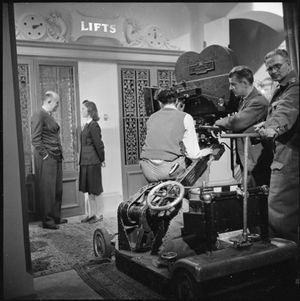 Pavlow on the set of Night Boat to Dublin in 1945

She began work as a child actress with John Gielgud and the Royal Shakespeare Company.

In December 1937, at fifteen, she played the role of Gretel in a BBC-TV production of Hansel and Gretel. As of April 2014, she holds the record for the earliest known appearance on television by a living person.

During the war, she was in ENSA and also made the crossover from theatre to screen.[2]

She made numerous TV appearances over the next 45 years, and most recently, she appeared in the television drama "The Final Cut", part 3 of the House of Cards political trilogy lobbying the Prime Minister as an Age Concern campaigner, the serial Belonging (2004), starring Brenda Blethyn and was interviewed for the documentary series on BBC 2, British Film Forever. In 2007, she guest-starred in the audio play Sapphire and Steel: Cruel Immortality and had a cameo in the film Glorious 39 in 2009.

She was married to the actor Derek Farr from 1947 until his death in 1986. They met in 1941 during the shooting of Quiet Wedding and again at the set of The Shop at Sly Corner in 1947. They continued to play together on stage and in films. They had no children.

Pavlow was inducted into the actors' care home and charity, Denville Hall, and was active on its management committee.