Murray Edwards College is a women-only constituent college of the University of Cambridge. It was founded as "New Hall" in 1954, and unlike many other colleges, it was founded without a benefactor and did not bear a benefactor's name. This situation changed in 2008. Following a donation of £30 million by alumna Ros Edwards (née Smith) and her husband Steve Edwards, New Hall was renamed Murray Edwards College, honouring the donors and the first President, Dame Rosemary Murray.[5][6][7] 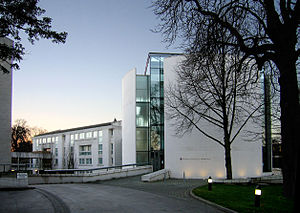 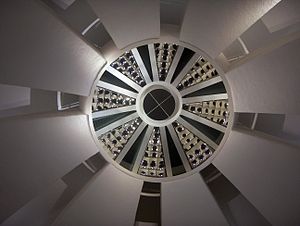 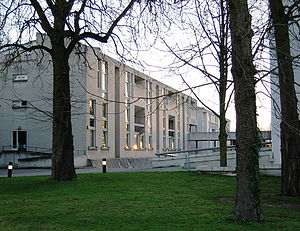 The Murray Edwards College porters' lodge and with the dome over the dining hall in the background.

New Hall was founded in 1954, housing sixteen students in Silver Street where Darwin College now stands. This was at a time when Cambridge had the lowest proportion of women undergraduates of any university in the United Kingdom, and when only two other colleges (Girton and Newnham) admitted female students.

In 1962, members of the Darwin family gave their home, "The Orchard", to the College. This new site was located on Huntingdon Road, about a mile from the centre of Cambridge. The architects chosen were Chamberlin, Powell and Bon, who are known for their design of the Barbican in London, and fundraising commenced. The building work began in 1964 and was completed by W. & C. French in 1965.[8] The new college could house up to 300 students.

In 1967, one of the College's PhD students, Jocelyn Bell Burnell, a researcher in the university radio astronomy group, discovered the first four pulsars, leading to a Nobel Prize for her supervisor, and for Jocelyn Bell-Burnell herself, ultimately a position as a Research Professor at the University of Oxford.

Men-only Cambridge colleges were converted into mixed colleges in the 1970s and 1980s. Since the 2007 announcement that Oxford University's last remaining women-only college, St Hilda's, would admit men, Cambridge is the only university in the United Kingdom that partially maintains a female-only student admissions policy, represented by Newnham College, Murray Edwards College, and Lucy Cavendish College.[9][10] The fellowship and staff at Murray Edwards College are nevertheless recruited from both sexes.[11]

New Hall received its Royal Charter in 1972. The Arms of the college are emblazoned as follows:

In plain English, this means: on a black background, place the following features in silver. Vertically in the centre, place a Dolphin with head downwards to the left. On top, place three stars horizontally across. Bordering the arms, place a square wave representing the battlements of a castle.

The black castellation round the arms marks the college's location on Castle Hill. The three stars are borrowed from the Murray coat of arms, while the heraldic Dolphin symbolises a youthful spirit of exploration and discovery, and a kindly intelligence.

In addition to the arms, the college had designed a new logo to mark its transition from New Hall to Murray Edwards College. It was based on the design of the interior of the dining hall (the "Dome") and was called the 'spark'.[12][13] However, on consultation with its alumnae, the college decided to continue to use its arms in official materials.

Like many of the other Cambridge Colleges, Murray Edwards College was not built all at one time but expanded as the need arose, over several time periods. The College therefore has several accommodation blocks of differing styles. In order of construction:

The first buildings of the College on Huntingdon Road were designed by the architects, Chamberlin, Powell and Bon, and are listed Grade II* (particularly important buildings of more than special interest).[19] This includes:

The College gardens have an informal style, initially planned and planted by the first president, Dame Rosemary Murray. The gardens include a greenhouse originally belonging to the estate of the Darwin family, where banana plants are now grown during the winter months.

In 2007, Murray Edwards College (then New Hall) became the first Cambridge College to participate in the RHS Chelsea Flower Show. [20][21] The theme of the presented garden was The Transit of Venus, and was awarded a Bronze Flora medal in the Chic Garden Category.[22][23] After the show, this garden was recreated in a slightly larger form and is now displayed beside the library.

The gardens are maintained by professional staff, and recently also by fellows and students. Since 2012, gardening allotments are provided for fellows, undergraduates and postgraduates for growing herbs and vegetables, in addition to the flowers and herbs already planted by the gardeners.

The college maintains a fund for graduate research, including the Stephan Körner graduate studentship for studies in philosophy, classics or law.[24]

Murray Edwards is home to the New Hall Art Collection, the largest collection of women's art in Europe, and the second largest in the world (the largest being the National Museum of Women in the Arts in Washington, D.C., USA).

The New Hall Art Collection was started in the early 1990s, when the College had few pieces of art and most of them were portraits of old gentleman. The College wrote to 100 women artists and asked each to donate one piece of art, and more than 75% of the artists approached agreed to give a piece of work.[25] Donations have continued since, and the Art Collection now contains work by many famous women artists, including: