Anthony Murray Gleeson AC, QC, (born 30 August 1938) was the eleventh Chief Justice of the High Court of Australia, the highest court in the Australian court hierarchy.

Gleeson was born in Wingham, New South Wales, the eldest of four children. He was educated at St. Joseph's College in Hunters Hill, where he won the Lawrence Campbell Oratory Competition in both 1953 and 1955, before matriculating to receive first class honours degrees in Arts and Law from the University of Sydney. Among his graduating class of 1962 were John Howard, later to become Prime Minister; and Michael Kirby, who later served alongside him as a judge on the High Court.[1]

His appearances as junior counsel focussed mainly on matters of taxation and commercial law, as well as important constitutional cases including Strickland v Rocla Concrete Pipes Ltd, which concerned the scope of the corporations power.

Upon his appointment as Queen's Counsel (QC) in 1974, Gleeson's career as senior counsel continued to focus on commercial and constitutional matters. However he also appeared in some high profile criminal cases, including his successful defence before a jury of National Party MP Ian Sinclair in 1980.[2] In the same year he appeared for the appellants in Port Jackson Stevedoring v Salmond & Spraggon, the last case granted leave to appeal to the Privy Council from the High Court.[2] In 1981 he appeared for former Prime Minister Sir William McMahon in Evans v Crichton-Browne, excluding the rhetoric of electoral advertising from judicial scrutiny under the Commonwealth Electoral Act 1918.[2] Gleeson was President of the New South Wales Bar Association 1984-1985.

He was a methodical counsel, who prepared his cases and even his cross examinations in minute detail. Retired Justice of Appeal Roderick Meagher said jokingly of Gleeson: "He has written nothing outside his professional work. He takes no interest in either music or art. He does, however, like flowers. He stares at them to make them wilt."[3] 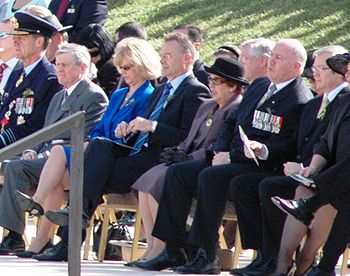 Gleeson was appointed as Chief Justice of the Supreme Court of New South Wales in 1988, the first barrister to be directly elevated to the Chief Justiceship since Frederick Jordan in 1934.[2] During his decade as Chief Justice of New South Wales, the court system dealt with considerable change including fast growing demand, cost constraints and delays. He sought to delineate appropriate boundaries for the political debate surrounding litigation, and was adamant that the proper administration of justice was a part of civilised government and not a free market privilege.[2]

The tradition of the Chief Justice frequently appearing in the Court of Criminal Appeal was continued under Gleeson's tenure. In this role, he appeared as a judge in R v Birks, where it was found a trial counsel's proved incompetence was a ground of appeal, and Attorney-General (NSW) v Milat, where an indigent accused was found to be entitled to legal representation as a basic requirement of fairness in a serious legal trial.[2]

Gleeson also frequently presided in the Court of Appeal, a forum more suited to his expertise in administrative, commercial, and constitutional law. In 1992, he presided over Greiner v Independent Commission Against Corruption, which exonerated Nick Greiner from charges of corruption, although Greiner was forced to resign as Premier months earlier by independents who controlled the balance of power in the New South Wales Legislative Assembly. Other notable cases include Ballina Shire Council v Ringland, where he endorsed the constitutionally implied right to freedom of political communication and concluded that councillors could not sue for defamation on statements about their performance, and Egan v Willis where the New South Wales Legislative Council was found to be empowered to compel the treasurer Michael Egan (then a member of the Legislative Council) to produce documents and to suspend him for non-compliance. In Egan v Chadwick, this power was found to be not limited by legal professional privilege.

His tenure as Chief Justice was also characterised by a large number of joint judgments, and a relatively frequent number of judgments that clearly and plainly provide the Court's ratio decidendi.[2]

On 30 July 2008, it was announced that Federal Court justice Robert French would succeed Gleeson as Chief Justice. In accordance with the Australian Constitution, he retired from the High Court on 29 August 2008, the day before his 70th birthday. The occasion was marked by a ceremonial sitting of the High Court in Canberra.

On 7 November 2008, Gleeson was appointed a non-permanent judge of the Court of Final Appeal of the Hong Kong Special Administrative Region. He is given a Chinese name "紀立信" (Jì Lìxìn) by the Hong Kong Judiciary.[6]

Gleeson was the Lieutenant Governor of New South Wales from 1989 to 1998.

He married Robyn Paterson in 1965, and the couple have four children. Their eldest daughter, Jacqueline, was appointed a judge of the Federal Court of Australia in 2014, after practising law as a barrister at the Sydney Bar and as general counsel of the Australian Broadcasting Authority.[10] Another daughter, Rebecca, is married to actor Eric Bana.[11]