The musée des Beaux-Arts de Rouen is an art museum in Rouen, Normandy, France. Founded in 1801 by Napoleon I, its current building was built between 1880 and 1888 and underwent complete renovation in 1994. It houses painting, sculpture, drawing and decorative art collections. 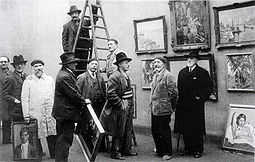 Built between 1877 and 1888 on a design by architect Louis Sauvageot, the museum features a collection of paintings, sculptures, drawings and objets d'art from the Renaissance to the present age, including a rare collection of Russian icons from the 15th to the beginning of the 19th century. The museum's exceptional Depeaux collection, consisting in paintings donation in 1909, places it at the forefront of French provincial museums for Impressionism.

The drawings exhibition room houses over 8000 pieces spanning from the Renaissance to the 20th century. The museum also hosts temporary exhibitions as well as odd contemporary art exhibitions. In 2006, the museum offered eight exhibitions, including the "Masterpieces of Florence Museums", which raised the number of visitors from 87,000 to 154,000. Permanent collections are exhibited in 60 rooms. The museum receives some funding from sponsorship. In 2007, its acquisition budget was €150 000 a year. The present director is Laurent Salomé.

The painting collection is of particular interest : every European school is represented, from the 15th to the 21st century. Among the most important painters whose work is featured in the museum one can find :

The Musée des Beaux-Arts de Rouen houses a lost statue by Pierre Paul Puget. This statue of Hercules slaying the Hydra of Lerna was originally in the castle of Vaudreuil, and was discovered, in 1882, by Adolphe-André Porée on the grounds of the Biéville-Beuville castle.[1]