The Muses /ˈmjuːzᵻz/ (Ancient Greek: Μοῦσαι Mousai; perhaps from the o-grade of the Proto-Indo-European root *men- "think")[1] in Greek mythology are the goddesses of the inspiration of literature, science, and the arts. They were considered the source of the knowledge embodied in the poetry, song-lyrics, and myths that were related orally for centuries in these ancient cultures. They were later adopted by the Romans as a part of their pantheon.

In current English usage, "muse" can refer in general to a person who inspires an artist, writer, or musician.[2]

Political allusions to the influential roles that the muse plays within the political sphere[3] has also been referenced in current American literature. 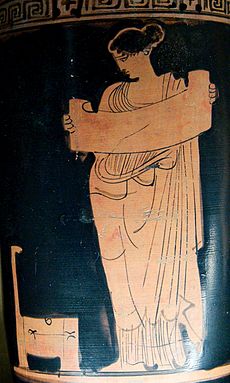 The earliest known records of the Muses are from Boeotia, the homeland of Hesiod. Some ancient authorities thought that the Muses were of Thracian origin.[4] There, a tradition persisted[5] that the Muses had once been three in number. Diodorus Siculus quotes Hesiod to the contrary, observing:

Writers similarly disagree also concerning the number of the Muses; for some say that there are three, and others that there are nine, but the number nine has prevailed since it rests upon the authority of the most distinguished men, such as Homer and Hesiod and others like them.[6]

Diodorus also states (Book I.18) that Osiris first recruited the nine Muses, along with the Satyrs or male dancers, while passing through Ethiopia, before embarking on a tour of all Asia and Europe, teaching the arts of cultivation wherever he went.

The Muses, the personification of knowledge and the arts, especially literature, dance and music, are the nine daughters of Zeus and Mnemosyne (memory personified). Hesiod's account and description of the Muses was the one generally followed by the writers of antiquity. It was not until Roman times that the following functions were assigned to them, and even then there was some variation in both their names and their attributes: Calliope (epic poetry), Clio (history), Euterpe (flutes and lyric poetry), Thalia (comedy and pastoral poetry), Melpomene (tragedy), Terpsichore (dance), Erato (love poetry), Polyhymnia (sacred poetry), Urania (astronomy).

Three ancient Muses were also reported in Plutarch's Quaestiones Convivales[7] (9.I4.2–4).[8] The Roman scholar Varro relates that there are only three Muses: one who is born from the movement of water, another who makes sound by striking the air, and a third who is embodied only in the human voice. They were Melete or Practice, Mneme or Memory and Aoide or Song. 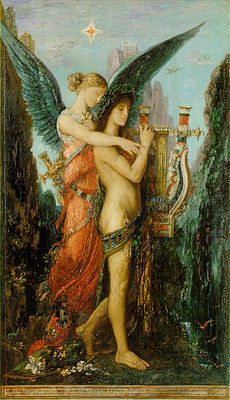 However the Classical understanding of the muses tripled their triad, set at nine goddesses, who embody the arts and inspire creation with their graces through remembered and improvised song and stage, writing, traditional music, and dance.

In one myth, King Pierus, king of Macedon, had nine daughters he named after the nine Muses, believing that their skills were a great match to the Muses. He thus challenged the Muses to a match, resulting in his daughters, the Pierides, being turned into chattering magpies[9] for their presumption.

Sometimes they are referred to as water nymphs, associated with the springs of Helicon and with Pieris. It was said that the winged horse Pegasus touched his hooves to the ground on Helicon, causing four sacred springs to burst forth, from which the muses were born.[10] Athena later tamed the horse and presented him to the muses.

Antiquity set Apollo as their leader, Apollon Mousagetēs ("Apollo Muse-leader").[11] Not only are the Muses explicitly used in modern English to refer to an artistic inspiration, as when one cites one's own artistic muse, but they also are implicit in words and phrases such as "amuse", "museum" (Latinised from mouseion—a place where the muses were worshipped), "music", and "musing upon".[12]

According to Hesiod's Theogony (7th century BC), they were daughters of Zeus, the second generation king of the gods, and the offspring of Mnemosyne, goddess of memory. For Alcman and Mimnermus, they were even more primordial, springing from the early deities, Uranus and Gaia. Gaia is Mother Earth, an early mother goddess who was worshipped at Delphi from prehistoric times, long before the site was rededicated to Apollo, possibly indicating a transfer to association with him after that time.

Pausanias records a tradition of two generations of Muses; the first are the daughters of Uranus and Gaia, the second of Zeus and Mnemosyne. Another, rarer genealogy is that they are daughters of Harmonia (the daughter of Aphrodite and Ares), which contradicts the myth in which they were dancing at the wedding of Harmonia and Cadmus.

Compare the Roman inspiring nymphs of springs, the Camenae, the Völva of Norse Mythology and also the apsaras in the mythology of classical India. 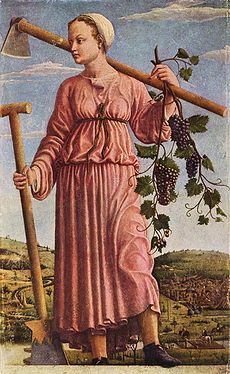 Polyhymnia, the Muse of sacred poetry, sacred hymn and eloquence as well as agriculture and pantomime.

According to Pausanias in the later 2nd century AD,[13] there were three original Muses, worshiped on Mount Helicon in Boeotia: Aoidē ("song" or "tune"), Meletē ("practice" or "occasion"), and Mnēmē ("memory"). Together, these three form the complete picture of the preconditions of poetic art in cult practice. In Delphi three Muses were worshiped as well, but with other names: Nētē, Mesē, and Hypatē, which are assigned as the names of the three chords of the ancient musical instrument, the lyre. Alternatively they later were called Cēphisso, Apollonis, and Borysthenis, whose names characterize them as daughters of Apollo.

In later tradition, four Muses were recognized: Thelxinoë, Aoedē, Arche, and Meletē, said to be daughters of Zeus and Plusia or of Uranus.

In one myth, the Muses judged a contest between Apollo and Marsyas. They also gathered the pieces of the dead body of Orpheus, son of Calliope, and buried them. In a later myth, Thamyris challenged them to a singing contest. They won and punished Thamyris by blinding him and robbing him of his singing ability.

Though the Muses, when taken together, form a complete picture of the subjects proper to poetic art, the association of specific Muses with specific art forms is a later innovation. The Muses were not assigned standardized divisions of poetry with which they are now identified until late Hellenistic times. 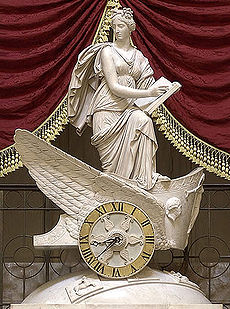 In Renaissance and Neoclassical art, the dissemination of emblem books such as Cesare Ripa's Iconologia (1593 and many further editions) helped standardize the depiction of the Muses in sculpture and painting, so they could be distinguished by certain props. These props, or emblems, became readily identifiable by the viewer, enabling one immediately to recognize the Muse and the art with which they had become associated. 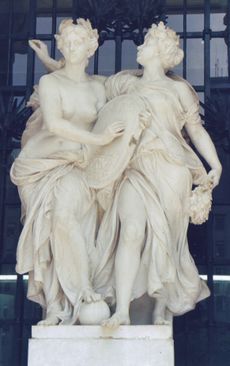 Greek mousa is a common noun as well as a type of goddess: it literally means "art" or "poetry". According to Pindar, to "carry a mousa" is "to excel in the arts". The word probably derives from the Indo-European root men-, which is also the source of Greek Mnemosyne, English "mind", "mental" and "memory" and Sanskrit "mantra"[citation needed].

The Muses, therefore, were both the embodiments and sponsors of performed metrical speech: mousike (whence the English term "music") was just "one of the arts of the Muses". Others included Science, Geography, Mathematics, Philosophy, and especially Art, Drama, and inspiration. In the archaic period, before the widespread availability of books (scrolls), this included nearly all of learning. The first Greek book on astronomy, by Thales, took the form of dactylic hexameters, as did many works of pre-Socratic philosophy; both Plato and the Pythagoreans explicitly included philosophy as a sub-species of mousike.[16] The Histories of Herodotus, whose primary medium of delivery was public recitation, were divided by Alexandrian editors into nine books, named after the nine Muses.

For poet and "law-giver" Solon,[17] the Muses were "the key to the good life"; since they brought both prosperity and friendship. Solon sought to perpetuate his political reforms by establishing recitations of his poetry—complete with invocations to his practical-minded Muses—by Athenian boys at festivals each year. He believed that the muses would help inspire people to do their best.

Invoking the Muse in Literature 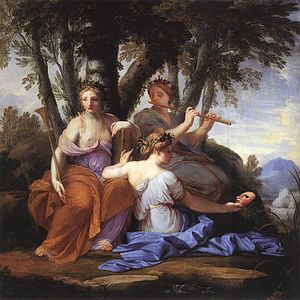 The Muses Clio, Euterpe, and Thalia, by Eustache Le Sueur 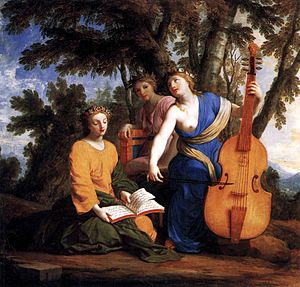 The Muses Melpomene, Erato, and Polyhymnia, by Eustache Le Sueur

Ancient authors and their imitators invoke Muses when writing poetry, hymns or epic history. The invocation occurs near the beginning of their work. It asks for help or inspiration from the Muses, or simply invites the Muse to sing directly through the author.

Originally, the invocation of the Muse was an indication that the speaker was working inside the poetic tradition, according to the established formulas. For example:

Homer, in Book I of The Odyssey:

"Sing to me of the man, Muse, the man of twists and turns
driven time and again off course, once he had plundered
the hallowed heights of Troy." (Robert Fagles translation, 1996)

Virgil, in Book I of the Aeneid:

O Muse! the causes and the crimes relate;
What goddess was provok'd, and whence her hate;
For what offense the Queen of Heav'n began
To persecute so brave, so just a man; [...]
(John Dryden translation, 1697)

Besides Homer and Virgil, other famous works that included an invocation of the muse are the first of the carmina by Catullus, Ovid's Metamorphoses and Amores, Dante's Inferno (Canto II), Chaucer's Troilus and Criseyde (Book II), Shakespeare's Henry V (Act 1, Prologue), his 38th sonnet, and Milton's Paradise Lost (opening of Book 1).

From cults to modern museums 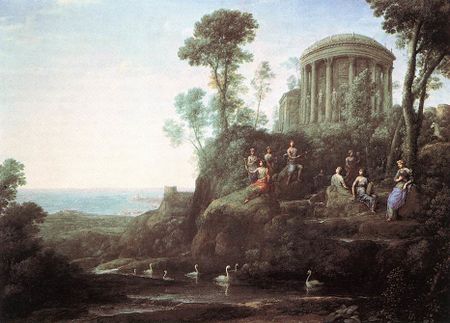 When Pythagoras arrived at Croton, his first advice to the Crotoniates was to build a shrine to the Muses at the center of the city, to promote civic harmony and learning. Local cults of the Muses often became associated with springs or with fountains. The Muses themselves were sometimes called Aganippids because of their association with a fountain called Aganippe. Other fountains, Hippocrene and Pirene, were also important locations associated with the Muses. Some sources occasionally referred to the Muses as "Corycides" (or "Corycian nymphs") after a cave on Mount Parnassos, called the Corycian Cave. The Muses were venerated especially in Boeotia, in the Valley of the Muses near Helicon, and in Delphi and the Parnassus, where Apollo became known as Mousagetes ("Muse-leader") after the sites were rededicated to his cult.

Often Muse-worship was associated with the hero-cults of poets: the tombs of Archilochus on Thasos and of Hesiod and Thamyris in Boeotia all played host to festivals in which poetic recitations accompanied sacrifices to the Muses. The Library of Alexandria and its circle of scholars formed around a mousaion ("museum" or shrine of the Muses) close to the tomb of Alexander the Great. Many Enlightenment figures sought to re-establish a "Cult of the Muses" in the 18th century. A famous Masonic lodge in pre-Revolutionary Paris was called Les Neuf Soeurs ("the nine sisters", that is, the nine Muses) - Voltaire, Benjamin Franklin, Danton, and other influential Enlightenment figures attended it. As a side-effect of this movement the word "museum" (originally, "cult place of the Muses") came to refer to a place for the public display of knowledge. 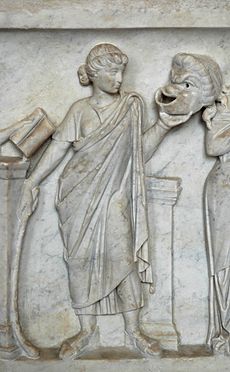